Bulgarian business wants EU money to be used for digitalisation, not Styrofoam 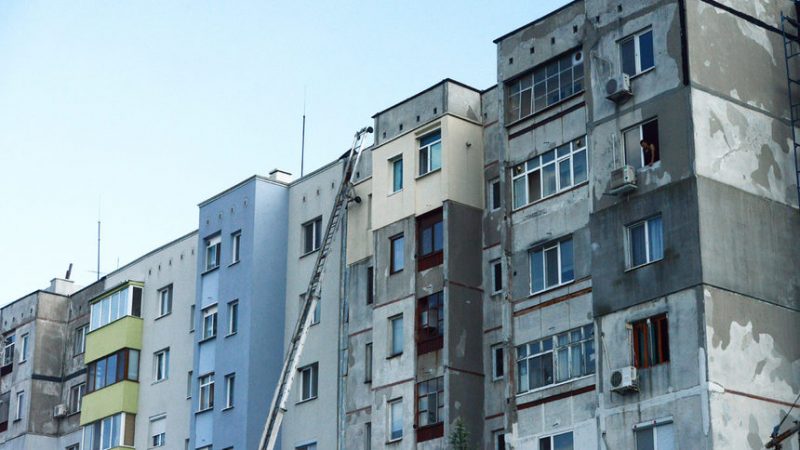 Rehabilitation of a building in Bulgaria. Bulgaria's top entrepreneurs propose the funds for rehabilitation and energy efficiency to be drastically reduced and to be re-directed toward the large enterprises for environment-friendly technological modernisation. [Dnevnik, Tsvetelina Belutova]

Don’t offer us analog solutions for the digital challenges of the future. This message sums up the assessment of the large industrial enterprises to the governmental draft based on the EU Recovery Plan, under which Bulgaria intends to absorb nearly €6 billion. EURACTIV Bulgaria reports.

Bulgaria’s top entrepreneurs propose the funds for rehabilitation and energy efficiency to be drastically reduced and to be re-directed toward the large enterprises for environment-friendly technological modernisation.

The cabinet of Boyko Borissov has proposed spending a lot of money on sanitising buildings erected under communism, basically by covering them with Styrofoam. Critics say that in such a way, the EU money is badly spent, and a lot of it end up in the pockets of “friendly” companies specialised in rehabilitation.

The companies are categorically against another idea of ​​Borissov’s cabinet – to spend hundreds of millions in the development of industrial parks. Conversely, they propose re-directing these funds for green investments in industry.

“The general impression of the Plan is that it provides an analog response to digital challenges, in the era of digital transformations, as the main part of the investments foreseen are aimed at building or improving the existing buildings, instead of building systems of smart grids and connections “, said the Association of Industrial Capital in Bulgaria (BICA) in its opinion to the government-proposed plan under the EU recovery fund.

BICA is opposed to investing in new industrial parks and financing technical infrastructure, for which they believe no clear business need exists, especially after the economic crisis caused by the pandemic.

Instead, large enterprises propose that all resources for parks be directed to investment in re-industrialisation, including technological modernisation and restructuring and reorientation of production, as well as for shortening supply chains.

A check by EURACTIV Bulgaria in the government’s draft Recovery Plan showed that it has earmarked BGN 490 million (€295) for the construction of industrial parks. The motive is that their presence would allow all regions of the country to have areas for business development with technical and logistics infrastructure.

The Bulgarian Association of Consultants for European Programs (BAKEP) also considers it unnecessary to invest in industrial parks. “The radically changed realities of the COVID pandemic suggest a significant contraction of investment plans globally, wich limits the creation of new businesses or relocating existing local businesses to expand and development. Against this background, there is no logic in investing in new industrial infrastructure “, BAKEP wrote in an opinion on the government plan.

The Bulgarian industry also proposes to take BGN 2 billion (€1 billion) from the building rehabilitation projects. Currently, the draft government plan includes BGN 3 billion for energy efficiency measures for public, private and industrial buildings, street lighting systems. Thus, the large companies want a total of BGN 2.5 billion to be redirected to them for “green” modernisation, proposing that the money be taken from the budget for energy efficiency and for industrial parks.

Moreover, large companies believe that renovating houses and homes should not be free of charge for the owners, as proposed by the government. The industry offers the grant to vary from 25 to 50%.

Against the figure of BGN 2.5 billion for their technological modernization, guaranteeing climate neutrality in harmony with the “Green Deal” of the EU, asked by the big companies, the EURACTIV Bulgaria check of the government project shows that for the “green renewal ”of the Bulgarian industry, only BGN 100 million have been allocated, in the form of loans.

The government’s plan also mentions the creation of a National Decarbonisation Fund, which in the form of loans to support investments in low-carbon development. However, its description neither indicates what resource is envisaged, nor who and how will be able to benefit from it.

Where is the money for electric vehicles?

There are no measures to “support the introduction of electric vehicles, production of electric motors”, alerted the Bulgarian Mechanical Engineering Branch Chamber. They believe that there is a need to convert old cars with internal combustion engines into electric cars and emphasize that this task can be realized by machine-building enterprises in the country.

“In order to legalize the use of these cars on the national road network, the European legislation introduced the requirement to complete a test for electromagnetic compatibility, for which no laboratory in the country exists”, the industry warned. Thus, they propose a project for the construction of such a laboratory with European funds under the future EU recovery plan.