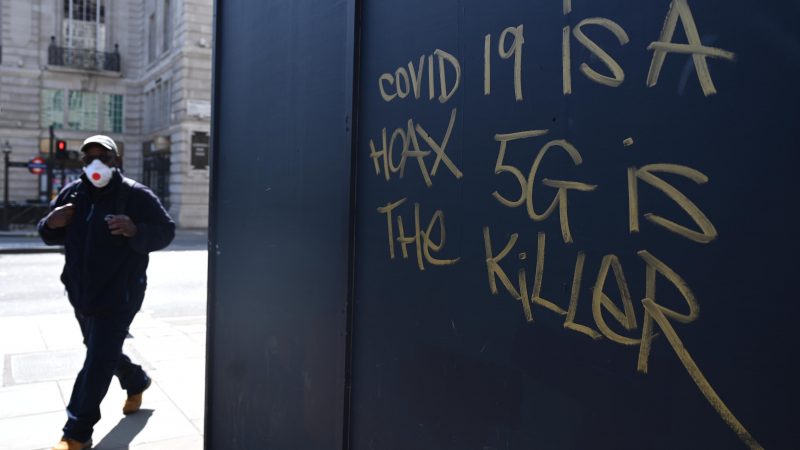 A man in a mask passes 5G conspiracy graffiti in London, Britain, 14 April 2020. A number of social media accounts are creating conspiracy theories about links between 5G technology and coronavirus. [Neil Hall/EPA/EFE]

According to telecoms lobbying groups ETNO and GSMA, such false claims have resulted in over 140 arson attacks on infrastructure such as mobile phone masts in 10 European countries and assaults on scores of maintenance workers.

Britain has seen 87 arson attacks and the Netherlands 30, while cases have also been reported in France, Belgium, Italy and Germany.

According to an EU document seen by Reuters, member countries emphasised their concern at a video conference between themselves to discuss digital issues last Friday.

The Council of EU ministers “expresses the importance of fighting against the spread of misinformation related to 5G networks, with special regard to false claims that such networks constitute a health threat or are linked to COVID-19”, it said.

The World Health Organisation (WHO) has debunked the claims, saying that viruses cannot travel on radio waves or mobile networks, and that COVID-19 has also spread to countries without 5G mobile networks.

The European Commission, the EU executive, has also rejected such claims. The EU is looking to 5G to help it bounce back from the coronavirus and compete better with the United States and China.