Early detection of Alzheimer’s a wish, not yet a reality in Slovenia 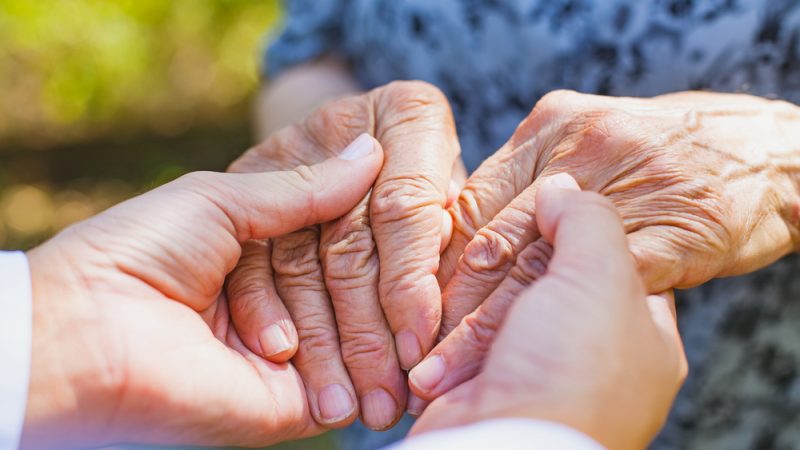 Štefanija Lukič Zlobec, the head of the Alzheimer awareness association Spominčica, estimates there are 33,000-34,000 dementia patients in Slovenia, whereby three quarters of those with early signs of the disease are undiagnosed and do not receive proper support or treatment. [Shutterstock/Ocskay Mark]

Early detection of Alzheimer’s disease is a stated objective of health policy in Slovenia, but it remains largely unattained. Serious financial outlays and systemic action will be required to successfully deploy an early detection system and treatment of the disease. EURACTIV’s partner Slovenian news agency (STA) reports.

Figures on how many people have Alzheimer’s, responsible for 60% of all dementia cases, are hard to come by. A dementia registry planned in the national dementia management strategy does not exist yet, which leaves experts with guestimates at best.

Štefanija Lukič Zlobec, the head of the Alzheimer awareness association Spominčica, estimates there are 33,000-34,000 dementia patients in Slovenia, three-quarters of those with early signs of the disease are undiagnosed. They do not receive proper support or treatment.

Those diagnosed typically have such advanced dementia that it is no longer possible to mitigate symptoms with anti-dementia drugs.

“Because the symptoms are so mild at the beginning and individuals do not see a doctor, most diagnoses come at a more advanced stage of the disease, when they already have serious problems and soon become dependent on others,” she says.

There has been some headway in recent years. Dr Martin Rakuša, a neurologist at the University Medical Centre Maribor who works with dementia patients, says that “we have overcome the nihilism that grandma has dementia and there is nothing we can do about it.”

“If we can give a 75-year-old five years of relatively cognitively useful life, we have done a lot. Such a person can function normally in the home environment,” he says.

An awareness-raising campaign by Spominčica in 2017-2018 resulted in a slight increase in the number of people getting treatment. Alas, its effect has already waned, according to Rakuša.

But even if there is sufficient awareness among the population about the need to see a doctor at the first sign of dementia, little will be achieved unless there are enough doctors to treat them.

“If they have to wait for treatment for too long, it’s of no use as everyone knows they have to see a doctor as soon as memory problems appear,” says Rakuša.

There are only 150 neurologists in Slovenia and about twice as many psychiatrists, but very few clinical psychologists treat and diagnose Alzheimer’s disease and dementia.

Since 2018 GPs can treat dementia with anti-dementia drugs without a prior diagnosis by specialist neurologists or psychiatrists, but in their role as the gateway to secondary healthcare, they are chronically overstretched.

The situation is likely to improve with the emerging new network of mental health centres for adults and specialist departments at the secondary level in accordance with the National Mental Health Resolution 2018-2028, but this is still a work in progress.

Diagnostics have been improving fast, according to Rakuša. In both primary and secondary care, doctors diagnose Alzheimer’s either with lab analyses of cerebrospinal fluid or with MR and CT scans of the brain.

“The question is who will pay. About 50,000 people have moderate or subjective cognitive disorders, examining everyone would cost €2,000 apiece,” Rakuša says.

Biomarkers in the blood are a significant recent advancement in Alzheimer’s diagnostics and hold great promise as a screening technique. In future, GPs could prescribe exams for specific biomarkers, which would show whether a person has a greater risk of developing Alzheimer’s.

Alas, biomarker tests are not conducted in Slovenia yet. According to Rakuša, they are expensive, at about €1,000 per test, and were such a screening programme to be introduced; special laboratories would also be needed, costing hundreds of times as much.

At present, a cerebrospinal fluid analysis can take months because to save money, samples are analysed in batches rather than individually. Once a diagnosis is made, treatment can start immediately with existing anti-dementia drugs.

“But once a biopharmaceutical is available, if we indeed get it next year, waiting for months for the results of a cerebrospinal liquid test will not be acceptable,” Rakuša says.

A new anti-dementia drug called Aducanumab, the first drug that not only treats symptoms but targets the underlying causes of Alzheimer’s has already received accelerated approval by the US Food and Drug Administration. The European Medicines Agency has not reached a decision yet.

But to ensure sufficient capacity for early diagnosing of Alzheimer’s, in terms of staff and diagnostics, requires serious financial injections and systemic action, according to Rakuša.

“If you compare the overall cost of care for a single dementia patient with the price of diagnostics, diagnostics is cheap,” he says, pointing to financial savings and the benefits to families of people functioning generally in the home environment instead of being committed to an institution.

“Dementia is the most expensive disease in the world. It is long-lasting, families are exhausted, and there are no effective drugs as yet. It is important for the country to adopt a strategy in which it will determine how we are going to address these things.”

The Health Ministry says a dementia strategy covering the period until 2030 will be finalised by December. It will come with two-year action plans and estimates of financial needs.

One of the strategy’s goals will be to set up a national dementia registry, which is crucial since good data is needed to plan and implement health policy.

But as Rakuša points out that before the registry is set up, it is necessary to tackle staffing issues and diagnostics, or the registry itself will be in vain.

The need for good data and targeted policies is highlighted by growing outlays. The national health insurer issued prescriptions for dementia-related drugs and services worth €4.4 million last year, and it paid hospitals almost €680,000 for the treatment of 102 dementia patients.

Alas, these are just the direct costs. The overall costs are just rough estimates, but they are all an order of magnitude higher. A 2010 study by researchers led by Jure Bon estimated the total direct and indirect costs of all brain diseases, not just dementia, at almost €2.5 billion.

The COVID-19 pandemic has made the situation even worse, warns Lukič Zlobec. For many, the condition deteriorated due to social isolation. But beyond that, it is becoming increasingly clear that COVID-19 itself affects the brain.

Rakuša notes that cognitive decline is typical in patients with severe COVID-19, but similar effects can be observed with any severe viral infection. It is not clear, however, why patients who have had COVID-19. report “brain fog”.

So far, SARS-CoV-2 has not been isolated in the cerebrospinal fluid, which means it does not act as a neurotoxin. Yet the cytokine storm, a frequent condition in severe covid cases, damages veins, including those in the brain.

Images of such patients’ brains show characteristic changes: reduced metabolism in the frontal lobe, says Rakuša. Luckily, most patients recover entirely, but a certain percentage of patients will have permanent brain damage.