It’s a small world after all: Aerospace’s global reach 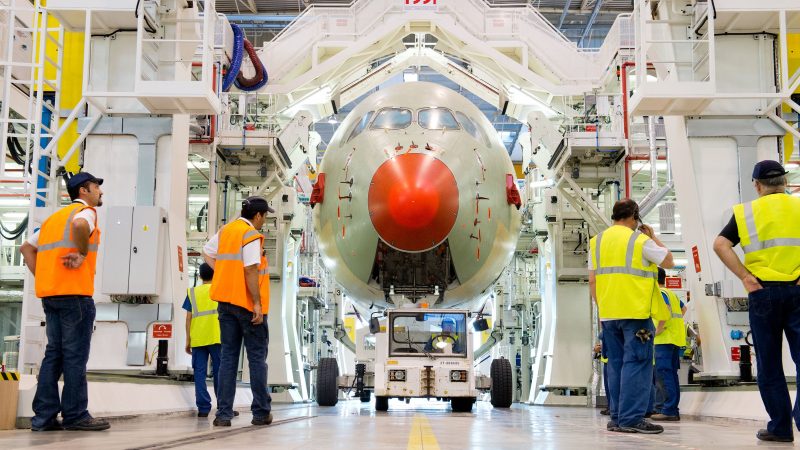 Building aircraft in the 21st century is a global effort. [Photo: Airbus]

The aerospace industry builds the aircraft that allow people to travel the world. But the industry itself is a globe-trotter as well.

Designing and building aircraft is a truly international endeavour, as experts and workers collaborate across borders to deliver products to a lucrative market.

According to the European Commission, the sector provides more than half a million jobs in the EU. Analysis by the EU executive points at France, Germany, Italy, Spain, Poland, Sweden and the UK as the major players.

Christian Scherer, the chief commercial officer of European powerhouse Airbus, recently said of his own company: “We’re the European integrated enterprise. In 50 years’ time, people will say this is the ultimate global enterprise, a world citizen.”

With more than 130,000 employees around the globe, 48,000 of whom are based in France, it is difficult to argue with that claim. Other giants of the industry like Boeing and Bombardier also maintain a big presence in various countries.

The European Commission’s focus on maintaining the competitiveness of Europe’s businesses also extends to aerospace, in areas like unmanned aircraft and engine technology. It also defends the sector in trade disputes.

Protectionist tendencies recently displayed by the administration of US President Donald Trump, most notably illustrated by ongoing tensions between Washington and Beijing, threaten to make life difficult for the industry though.

Proposed tariffs under consideration by the US include extra levies on fuselage parts, a move that Airbus chief Scherer acknowledged could “increase the price of airplanes”, given that one of its assembly plants is in Mobile, Alabama.

Scherer said the trade dispute would certainly be disadvantageous to an industry that “by definition works across borders”.

The International Air Transport Association (IATA) predicted in January that China would become the biggest civil aviation market in the world by 2025, confirming its importance in the sector’s future plans.

Given the Washington-Beijing dispute and the not-unlikely prospect of Donald Trump serving another term in the White House, market analysts have concluded that China will look to sate its demand for aircraft away from the US.

Christian Scherer though has insisted that the tensions do not play in favour of European industry players like his company, explaining that “big-ticket items” like airplanes are likely part of the ongoing talks.

But the trade spat is already helping to reshape global industries. US carmaker Tesla is nearly ready to open its third gigafactory in China and is on the lookout for a potential site for a fourth in northwestern Europe.

As well as tapping into a massive car-hungry market, Elon Musk’s company wants to avoid tariffs on imported American cars and parts.

Race to the top

Standards are also a part of the global picture, as all aircraft built in EU member states are subject to certification by the European Union Aviation Safety (EASA). Given the large number of exports, the agency’s work makes its way worldwide.

“We want to increase our presence on the global stage,” EASA boss Patrick Ky told members of the European Parliament’s transport committee on Tuesday (3 September).

That includes continuing to improve safety standards as well as environmental concerns such as emissions and noise levels.

One measure in the pipeline that could soon be rolled out is a so-called eco-label for aircraft. Similar to the one found on household appliances, the label would rank aircraft by efficiency and environmental performance.

The EASA boss confirmed that the calculations should be finished by the end of the year but the full parameters of the label are still to be finalised.

A looming dispute highlighted by Ky is the issue of supersonic commercial aircraft, which may be set for a comeback for the first time since Concorde was withdrawn from service in 2003.

“A strong battle [is coming] between the US and Europe about supersonic aircraft and their noise and environmental standards,” the EASA chief told MEPs meeting in Brussels.

Ky added that his agency is not against supersonic aircraft returning to commercial service but insisted that they must have noise standards met by conventional planes. The US has five supersonic projects in the works and the issue is followed closely by the White House.

French Guiana, on South America’s northeastern coast, is host to the European space port. Europe has been launching satellites and unmanned spacecraft into orbit since the late 1970s via the Ariane rocket programme.

Now in its fifth iteration, with a sixth version scheduled to debut next year, Ariane’s first four rocket variations put half of the world’s commercial satellites into space and ended the US monopoly on the business.

The launcher is made possible by thousands of employees stationed around the world, in locations like France, Japan, Singapore and the US.

Under the oversight of the European Space Agency (ESA), the Ariane rockets are manufactured in locations in France and Germany, while other countries contribute expertise and parts.

As work continues on making Ariane 6 ready for its first launch in 2020, the effort needed “a new, more efficient and competitive European industrial organisation in record time”, according to ArianeGroup CEO André-Hubert Roussel.

That network of manufacturers comprises 600 companies, including 350 small and medium firms, in 13 different countries. Nine thousand people are employed at the main plants in France and Germany.