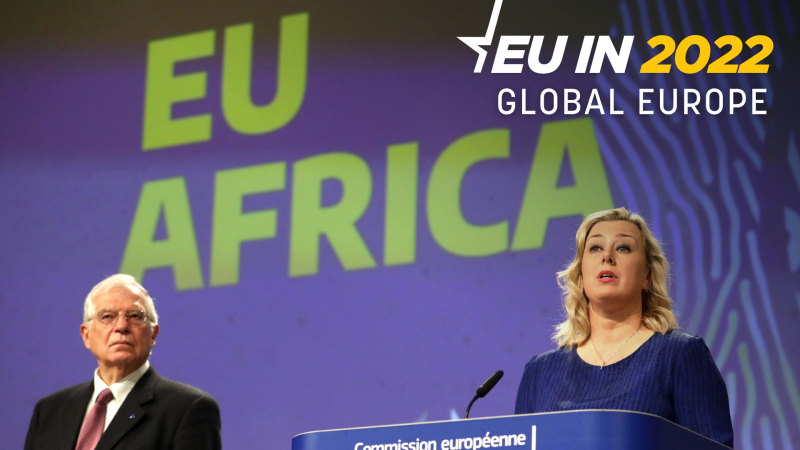 Nearly two years after the European Commission set out plans for a ‘strategic partnership’ with Africa, and repeated delays, the long-awaited EU–African Union summit is almost upon us.

There is no guarantee that the summit on 17-18 February in Brussels will be held in person. In the meantime, European Council President Charles Michel has taken on much of the diplomatic heavy lifting, crisscrossing Africa and inviting a group of African presidents for a summit pre–meeting in mid–December.

Michel wants a reset between Africa and Europe, “freed from the demons of the past”. But we can expect French President Emmanuel Macron, whose government holds the rotating EU presidency until July, to push his priorities, linked to broader reform of ‘Francafrique’, ahead of the French May presidential elections.

Macron, who has described EU relations with Africa as ‘a bit tired’, has set out six priority areas: finance, education, health and climate, security and migration, though there is currently little indication that these are far removed in substance from the EU’s aims.

The European Commission’s main goals are clear and have not changed radically from its March 2020 blueprint: to promote its Global Gateway, which promises to mobilise up to $340 billion by 2027 in support of a green and digital transition around the world, and was launched the day after a significant China-Africa summit ended in Dakar, Senegal in October.

It also wants its ‘Green Deal’ to be the gold standard across environmental, climate, energy and agriculture policy.

“We will invest with Africa to create a market for green hydrogen that connects the two shores of the Mediterranean,” European Commission President Ursula von der Leyen said in October.

The green transition is at the centre of the African Union’s ‘Agenda 2063 – ‘The Africa we want’ – and a group of countries, led by Morocco, are rapidly scaling up renewable energy production.

However, African leaders will be anxious to ensure that the EU’s carbon border adjustment mechanism does not hit African fossil fuels and minerals exports.

They point out that the African continent accounts for around 3% of global carbon emissions and that EU states, and other wealthy nations, have failed to deliver the $100 billion per year in climate change adjustment and mitigation funding.

The global distribution of vaccines and the economic and social recovery from the pandemic has added a new dimension to the longstanding discussions of trade, security, migration and mobility, climate change, and digital transformation.

The COVID pandemic has changed the policy priorities of the partnership, particularly on the African side. It has also altered the dynamic of the relationship.

Ramaphosa and Kenyan counterpart Uhuru Kenyatta have accused Europe of ‘vaccine apartheid’. That rhetoric has embarrassed Michel and other EU leaders and is likely to prompt African leaders to demand a higher price from the EU.

A key question will be whether the EU and African Union can work out a compromise on vaccine production. The EU remains one of the primary opponents of a temporary waiver on intellectual property, instead promising to support African health systems and vaccine production.

With the pandemic and the green deal the dominant issues on the table for both sides, we can expect little movement on trade and migration.

However, with the EU set to review its military and defence cooperation missions in Africa, due to the increased presence of  Russian mercenary firm Wagner group in states and regions where EU missions are active, the February summit could offer an opportunity to reset EU–Africa security policy.

The Wagner group case also underscores that the EU’s offer to Africa is not the only game in town. China has carved out its position as a significant infrastructure investor on the continent. The UK seeks to boost trade and investment ties with Anglophone nations, and Turkey and Russia have a more security-focused approach.

The February summit will also take place weeks before the US-Africa summit hosted by US President Joe Biden, whose administration has promised to reprioritise African policy after four years of neglect under his predecessor Donald Trump.

Both Michel and Macron want investment in Africa – and debt rescheduling – to be more imaginative, although they have yet to explain how this should be done.

“We have to show total solidarity towards Africans. We need to look at the figures by the World Bank and IMF: between 2020 and 2025, African economies will have a financing need of €300 billion – because they are going to suffer the consequences of COVID-19 and they will have to cope with a genuine demographic explosion,” Macron said in December.

“No ‘white elephants’ and no ‘debt traps’, but projects that are sustainable and serve the needs of local populations”.

For that to happen, EU officials need to add some flesh on the bones.

“We will connect institutions and investment, banks and the business community,” said Von der Leyen. However, several African states have complained that previous EU investment vehicles combining small amounts of investment via the EU budget with the European Investment Bank were cumbersome, complicated and rarely delivered investment.

Promises without substance will not create a partnership, let alone the ‘partnership of equals’ described by EU officials.