In the city of Dilingala, Saint-Paul Nodjimadji’s children are gathering shea nuts. They are one of the few products which grow at the beginning of the rainy season, in the south of Chad.

“The natives [Chadians] gave us the authorisation to gather shea nuts to feed our families,” explains Saint-Paul Nodjimadji. The 35-year-old man left CAR in 2014 because of the 2013 civil war that followed the fall of former President François Bozizé.

He first found shelter in a Chadian village near the border with his three wives and nine children, and then he was relocated in Dilingala, along with 2,300 other CAR refugees. The village located next to the refugee camp counts 2,500 Chadians, so the “more locals than refugees” tacit rule is respected.

In both parts of Dilingala, people worry about cultivation and food shortage. “I don’t want to rely on the WFO (World Food Programme) to be able to feed my family,” says Saint-Paul, who is waiting to have access to cultivable lands to start ploughing. “If I have access to land, I will be able to feed my family, like I used to do in CAR before the war.” 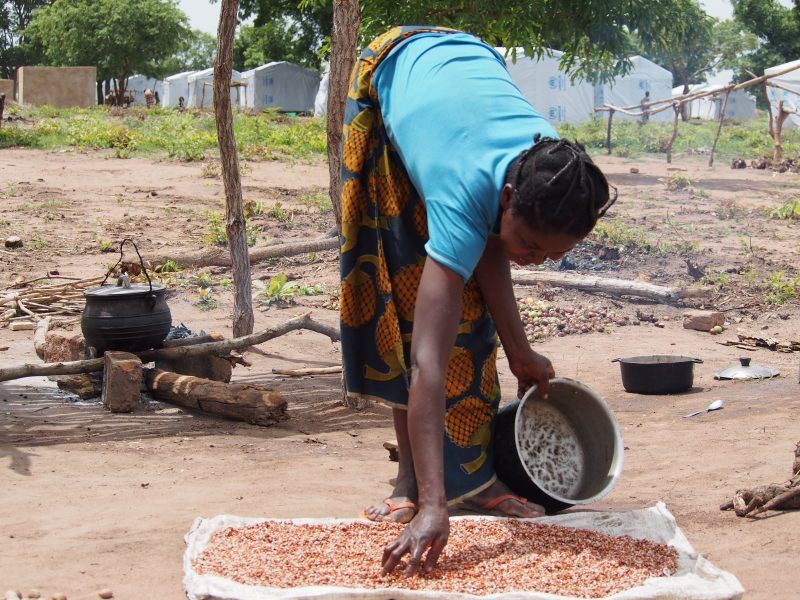 Saint-Paul’s impatience is also motivated by the necessity to cultivate the land right now. The rainy season has just started and it is high time to plant sorghum, millet and corn – the area’s traditional plants.

Also, the hunger gap season, during which food shortages occur before the new harvest, has started particularly early this year, thus pushing food prices up.

Since the recent opening of the facility by the UN High Commissioner for Refugees (HCR) in the administrative area of Goré, access to lands, seeds and farm equipment – which is part of the UN’s initiative to open up camps – remains complicated.

The UN’s approach aims at promoting the socio-economic integration of refugees – who stay for an average of 17 years in their host country – by placing them locally in villages.

Being integrated into the Chadian population allows refugees to become less dependent on international aid. One of the collateral damages of those refugee camps – which are usually the international response to crisis – is to be cut off from urban centres.

However, the head of the administrative district of Dilingala offered 300 hectares of cultivable lands to CAR refugees. But those lands still need clearing, which is impossible due to the lack of farm equipment. Seed supply might also be difficult because of the lack of funding. Those obstacles hinder the economic integration the HCR advocates.

“There are huge difficulties, food prices increase as refugees arrive. We offered lands, but now we need seeds to plant,” says Dilingala’s leader. During his 23 years in office, he witnessed all the refugee waves from CAR since 2003. “Many of them are now well-integrated in the villages. But others keep coming and we need to help them.”

CAR refugees depend on WFP food assistance, while waiting to have access to lands. Once a month, flour, sorghum, millet and corn bags are dropped at the entrance of the facility. Each family receives a part proportional to the number of its members. 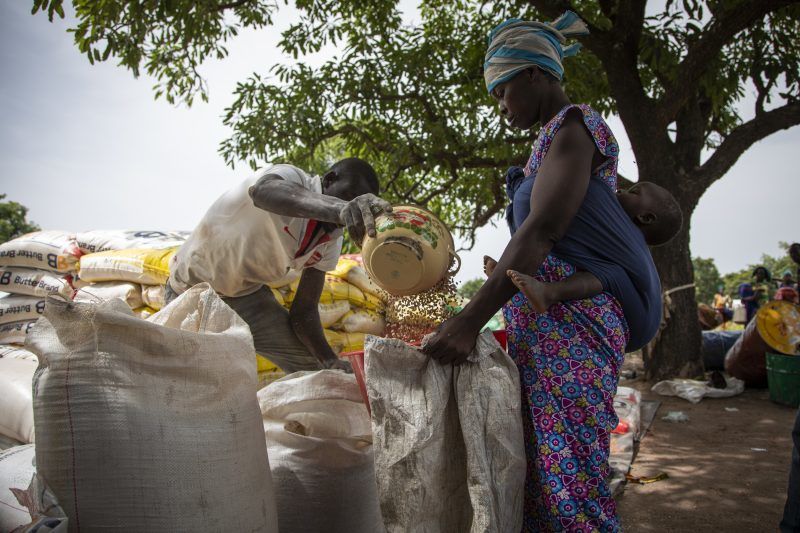 But the lack of funding has also pushed the WFP to limit food distribution. “We don’t have a choice when it comes to limit the food assistance,” says Mary-Ellen McGroarty, the head of WFP in Chad.

“Today, what we receive with the WFP is not enough to live decently”, says Saint-Paul. “I can only feed my family for three days with the monthly food we receive. Here is what we have left to make it through the month” he adds, showing the pile of shea nuts gathered by his children.

A tradition of hospitality

Despite the tense food situation, Chad has always welcomed refugees from neighbouring countries and it never created tensions.

“We can’t refuse to welcome these people, they are our brothers and their country is at war,” explains Dilingala’s leader. The refugee crisis has never been used for political ends and it saved the country – where internal divisions between Christians and Muslims exist – from community and religious tensions.

“Chad is a welcoming country for refugees. CAR’s and Chad’s people are from the same ethnic groups, they speak the same dialects, so it makes integration easier,” explains Olivier Brouant, the head of Chad’s European humanitarian aid operations (ECHO), one of Chad’s main lessors.

With Idriss Déby at its head, the country remains one of the poorest in the world. It did not benefit from its oil reserves – that were discovered a bit before the fall in barrel prices – thus nipping in the bud all hope for an economic recovery.

Despite the alarming economic situation, many people from CAR, Soudan or Nigeria come in Chad to take refuge, because unlike its neighbours, the country benefits from a certain stability.

Overall, the country hosts more than 400,000 refugees, 80,000 of them coming from CAR, for a total population of 14 million. Chad is thus one of the main host countries in the world. 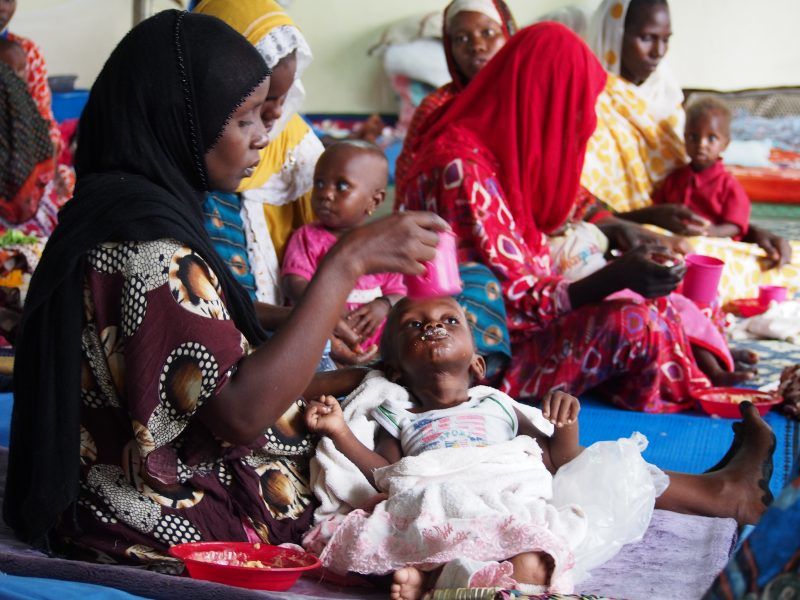 In the capital of Chad, N’Djamena, the Chad-China Friendship Hospital treats cases of acute malnutrition in young children, a countryside phenomena that has taken over the city in the past few years. EURACTIV.fr reports.

In Moissala, the main city of the neighbouring area of Barh Sara, the head of this administrative region Oumar Bahr is sitting under the traditional picture of President Idriss Déby.

“6,000 refugees arrived in my region,” he explains. CAR refugees have been placed in four different camps and Chadians living in those areas have accepted them without any tension.

“We asked the heads of the villages for their permission, and they all agreed,” he adds. “The people who live here have nothing, but they share the little food they have with refugees.”

The wave of CAR refugees coming to Chad started in 2003 but it became even more important with the fall of former President François Bozizé, overthrown by Séléka, a Muslim rebel coalition.

Since then, Séléka was dissolved and the situation was stabilised in the capital Bangui. But fights between ex-Séléka, Christian self-defence groups (like Anti-Balaka) and several armed militia groups have not stopped, thus pushing CAR civilians to go to Chad.

“Each year, there are conflicts in CAR, but at least here in Chad it is peaceful,” says Emery Béasangar, who fled with his family in 2017. “Some people refuse to leave their lands behind and decide to stay.”

In Markounda, a city in CAR, the 29-year-old farmer left everything behind. “We fled during the night to avoid militia groups, and we waited until the morning to cross the border.”

The border separating the two countries – closed since 2015 – has turned into a humanitarian corridor through which refugees arrive as attacks happen.

Armed groups sometimes manage to cross the Pendé River, which runs between the two countries, to steal livestock regardless of the Chadian army’s constant presence. 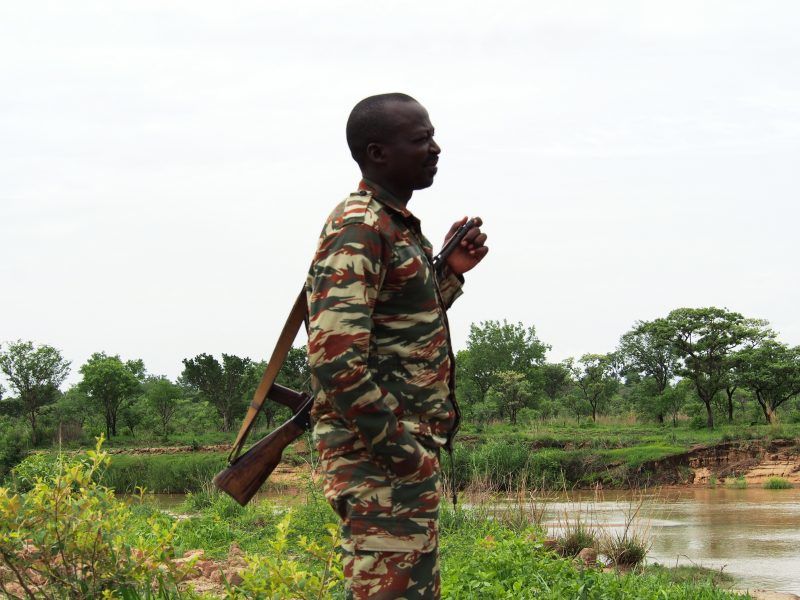 Chadian soldier at the border between Chad and CAR. [Cécile Barbière]

A return to the native land

But people are also crossing the border the other way round. “CAR women are crossing to harvest,” says a Chadian soldier. CAR refugees also decide to come home when they can’t make ends meet in Chad. “Almost 100 people left this morning,” says Blaise. “It’s been like that every day for weeks now.”