A photo of Bekora, a village in Ekondo Titi subdivision, Ndian division in the South West region. After attacks on Military by forces fighting to restore the State of Southern Cameroon and subsequent Military crackdown, the village is almost deserted. [@NforHanson Twitter]

The European Union has called on Cameroon to ensure its security forces use “proportional force” in the country’s restive English-speaking west.

“It remains crucial for the security forces to be proportionate in their use of force while carrying out their duties.”

Dozens of people have been killed since October in a violent crackdown on protests against the mainly French-speaking government. 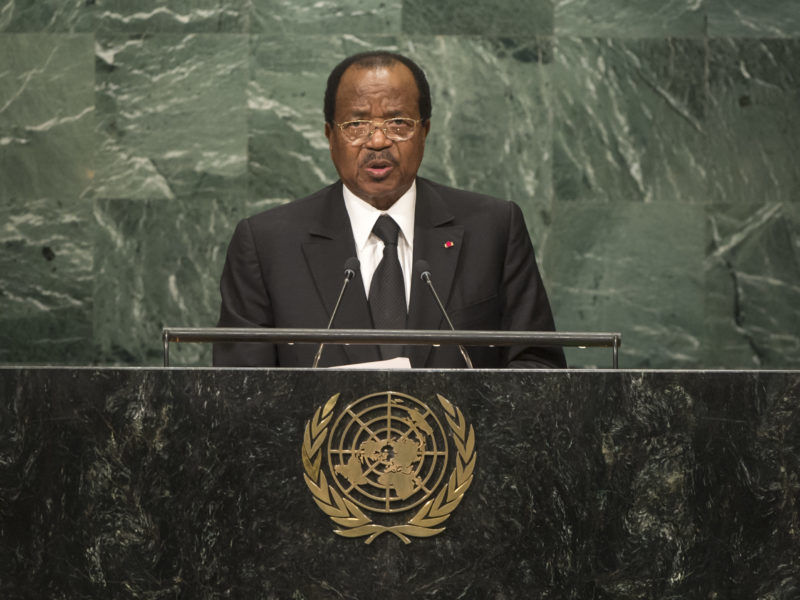 Soldiers shot at least eight people dead in Cameroon’s restive anglophone belt at the weekend as a separatist group made a symbolic declaration of independence.

Many English-speakers have accused the Francophone majority of discrimination and that has fuelled a separatist movement.

A very disturbing development – Alarming to see that forces from a #Francophone nation are being brought in to suppress the #Anglophone minority in #Cameroon. https://t.co/PLjqI3NS4h

Police say 22 police and soldiers have been killed in the violence but officials in the capital Yaounde have not released figures for the number of separatist or civilian losses.

“Fresh acts of violence in the (anglophone) northwest and southwest regions of Cameroon have caused the death of at least three members of the security forces and a number of civilians,” the EU statement said.

“Such acts are unacceptable and must be punished. The same applies to any excessive use of violence against civilians. The perpetrators must be brought to justice in accordance with the law.”

The EU called for “sincere and constructive dialogue” and for all sides to refrain from “any act that might exacerbate tensions or incite violence”.

Cameroon’s southwest and northwest regions are home to an anglophone minority that accounts for about a fifth of the country’s population.

In October, separatists declared the two regions as the self-proclaimed republic of “Ambazonia”, prompting a crackdown by the government.

The spiralling violence has prompted an estimated 30,000 Cameroonians to flee to neighbouring Nigeria.

The United States on Tuesday called on Cameroon to respect the rights of 47 English-speaking separatists who have been extradited from Nigeria.

The U.S. condemns the ongoing violence in #Cameroon’s Anglophone regions. We also call on the Government of Cameroon to respect the #humanrights, including due process, of the 47 Cameroonians forcibly returned from #Nigeria’s custody to the Cameroonian authorities on January 26. pic.twitter.com/XHEMnrGYNc

Cameroon has called them “terrorists” and said they will “answer for their crimes”.