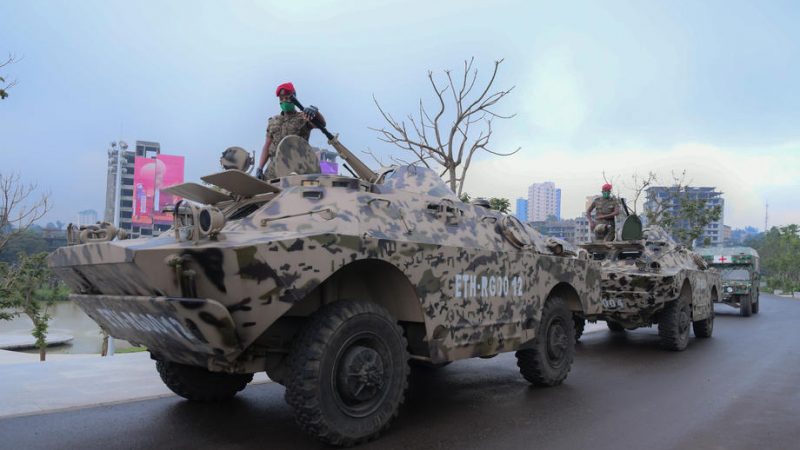 The EU is prepared to issue sanctions against those responsible for the war and humanitarian crisis in Ethiopia’s Tigray province, EU officials confirmed to EURACTIV on Thursday 5 November. [Stringer/EPA/EFE]

The EU is prepared to issue sanctions against those responsible for the war and humanitarian crisis in Ethiopia’s Tigray province, EU officials confirmed to EURACTIV on Thursday (5 November).

“The EU remains ready to use all its foreign policy tools, including restrictive measures, to promote peace, adherence to international humanitarian and human rights law, and help end conflict,” EU’s chief diplomat Josep Borrell said in a statement.

This would include the possibility of sanctions under the EU’s Human Rights Sanctions regime, which is similar to the United States’ Global Magnitsky Act, EU’s foreign affairs spokesperson Peter Stano confirmed to EURACTIV.

The question of sanctions is being considered by a number of Western powers.

A sanctions’ regime signed by US President Joe Biden covering those responsible for prolonging the conflict in northern Ethiopia, human rights abuses and obstruction of humanitarian access is now about to be implemented.

Officials say it will include travel bans and asset freezes on ministers, military commanders and regional authorities, as well as restrictions on aid and assistance and prohibition of arms sales to either Eritrea or Ethiopia.

In the meantime, the EU will continue to supply humanitarian aid, despite continued difficulties in aid reaching those in need, the European Commission confirmed.

More than 400,000 people are estimated to be living in famine conditions in Tigray, according to the UN’s World Food Programme, and a hundred trucks are needed daily to provide critical humanitarian needs.

The WFP has estimated that more than 13 million people in Ethiopia are now food insecure as the conflict impacts food production and supply.

Alongside the diplomatic threats, Borrell also offered a potential olive branch to Ethiopian Prime Minister Abiy Ahmed. The EU’s chief diplomat said Ethiopia was “a long-term partner for the EU” and added that the bloc “supports the stability, unity and territorial integrity of Ethiopia.”

Abiy launched military operations last November after rebels from the Tigrayan People’s Liberation Front, in the country’s northern province, launched an attack on a military base housing government troops.

However, a year after promising that it would be a three-week operation, there is no sign of a military victory over the rebels and fighting has intensified in recent weeks.

The recent escalation of fighting in the Amhara region and the military advances of the TPLF and Oromo Liberation Army (OLA), as well as aerial bombardment by the Ethiopian Airforce of Mekelle, the main town in Tigray, threaten to make the war a truly national conflict.

The European Union has already responded to the blockade of Tigray by blocking $107 million in budget support, and Stano confirmed that support for Ethiopia would continue to remain frozen.

The threat of sanctions and calls for a ceasefire from the EU, US, UN and Ethiopia’s neighbours have so far fallen on deaf ears, with Prime Minister Abiy, who was awarded the Nobel Peace Prize in 2019, still intent on achieving a military victory over the TPLF.

One response to “EU prepared to issue sanctions over Tigray war, officials confirm”