A second round of voting to choose a successor to President Ellen Johnson Sirleaf was suspended indefinitely by the Supreme Court on 31 October pending the resolution of a fraud complaint lodged with the electoral commission.

Charles Brumskine, the Liberty Party candidate who came third in the first round of voting on 10 October, filed the complaint, but was soon backed by the ruling Unity Party’s candidate, Vice-President Joseph Boakai, who placed second.

The European Union delegation to Liberia, in a statement, said it would “encourage all concerned to work constructively and in good faith to conclude the current complaints process without unnecessary delay.”

The runoff between former international footballer George Weah of the Coalition for Democratic Change (CDC) and Boakai was originally set for 7 November. 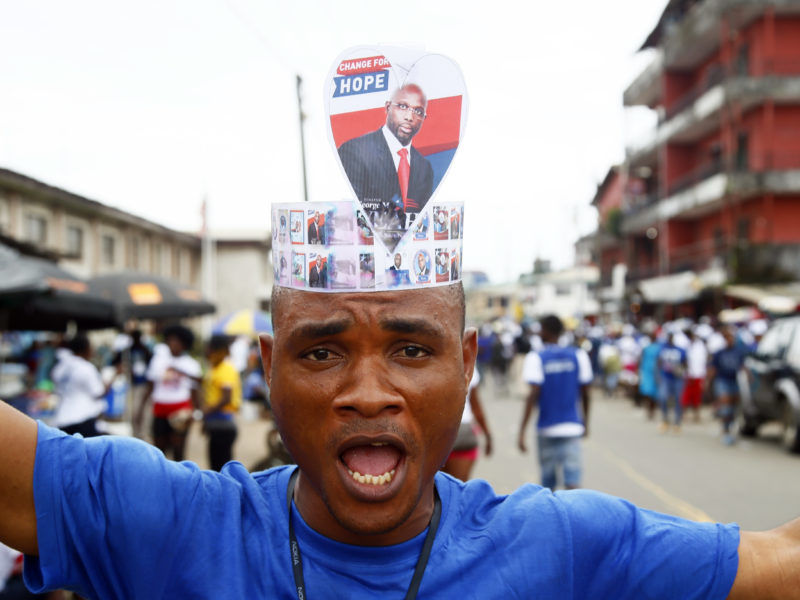 Former soccer star George Weah was set to win the first round of a presidential election in Liberia after the elections commission said on Sunday he was leading with 39% of votes and less than 5% of precincts still to be counted.

Hearings into the party’s grievances against the National Elections Commission (NEC) are ongoing with no decision expected for at least a week, after which the parties are expected to take the matter back to the Supreme Court.

International donors have poured billions of dollars into Liberia since Sirleaf was elected in 2005, and are nervously monitoring what should be the country’s first democratic transition in seven decades.

“The Liberian people demonstrated their commitment to democracy through the high turnout of voters on 10 October who cast their ballots in a peaceful atmosphere,” the EU statement added, calling for a process “which respects the will of the people.”

Battered by back-to-back civil wars between 1989 and 2003 and an Ebola crisis that killed thousands between 2014 and 2016, the election is considered a crucial test of the west African nation’s stability.

The EU declaration follows a joint statement from the African Union (AU), Economic Community of West African States (ECOWAS) and Liberia’s United Nations peacekeeping mission which fired a warning shot to those calling for an re-run of the whole election, dragging the process into the new year.

AULOL in Liberia, ECOWAS Commission in Liberia and UNMIL Joint Statement on the Liberian Elections https://t.co/M0hi0P1v4J

“We cannot but express concern over the prospects of a significant delay in bringing the litigations to their closure, thereby thwarting completion of the election process before the constitutionally-mandated date of government transition in January 2018,” the statement released Friday said.

The joint statement expressed hope that “the collective will and aspirations of the Liberian people will not be compromised for individual ambitions,” an apparent barb at the losing candidates.