The summit comes against a backdrop of a slew of measures, such as the German Marshall Plan for Africa, the EU’s new Migration Compacts, and Emergency Trust Funds for Africa, the Sustainable Development Goals and the EU’s New Consensus on Development – all seen as kick-starting a fresh dynamic between the world’s poorest continent and Europe.

But Nooke – who is Commissioner for Africa at the German Ministry for Economic Cooperation and Development – painted a much gloomier picture at a Brussels event hosted by the Konrad Adenauer Stiftung.

His criticisms will be all the more stinging as Germany will this summer host the G20 summit in Hamburg, explicitly devoted to a focus on Africa. 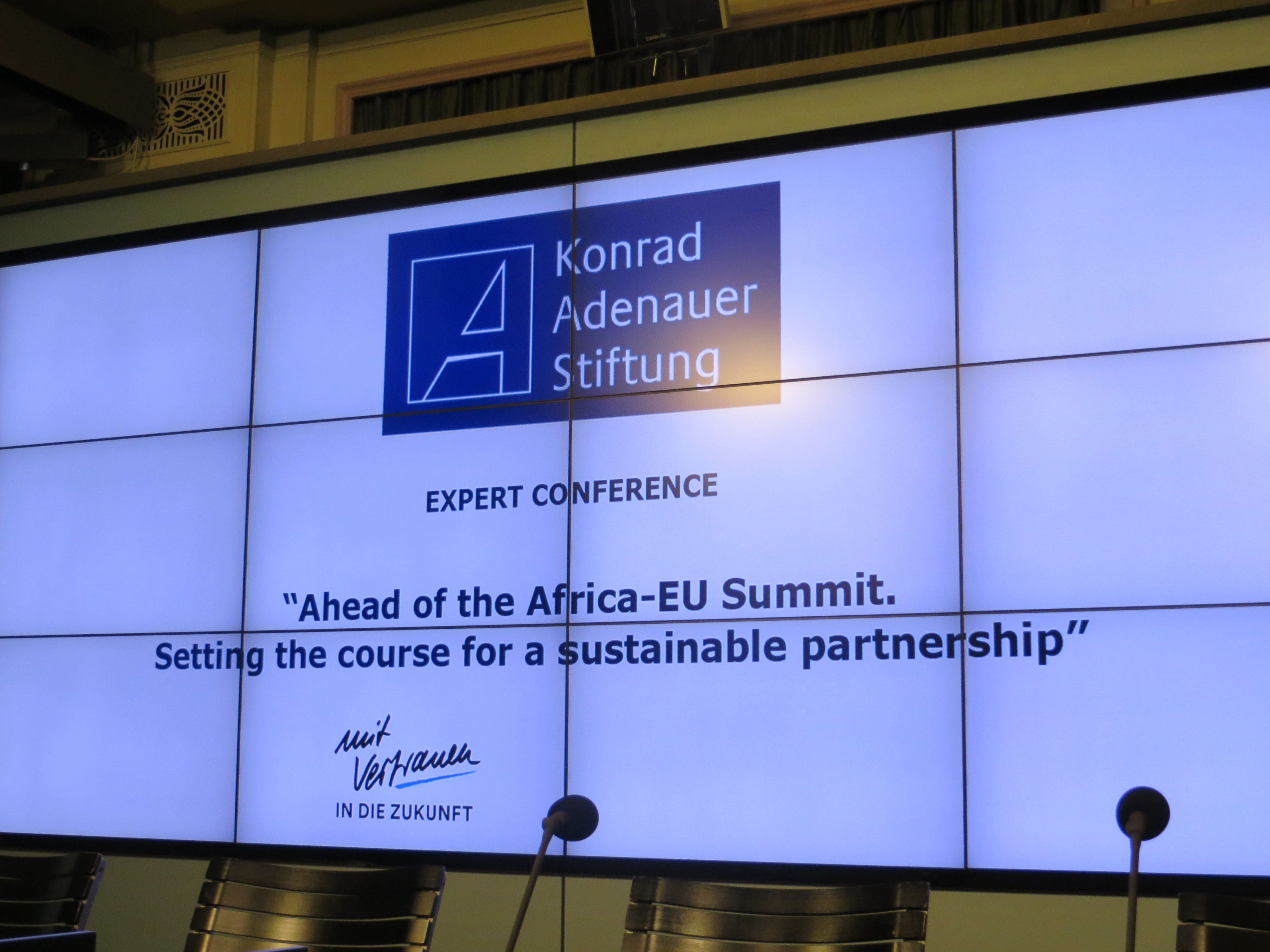 The seminar on the upcoming Africa-EU summit heard that many African governments are ‘ill-performing.’ [Matthew Tempest]

Nooke warned an audience of around 100 aid experts that “every malnourished child [in Africa] is a complaint against an African government”, adding in an implied threat that “those willing to take up this challenge will get support.”

He said that, while he agreed with the German chancellor that “the well-being of Africa is in Europe’s interests”, “that does not mean we carry the whole responsibility.

“We find that many African governments do not perform well.”

He warned that with the African population set to double by 2050 “we need a paradigm shift to deal this.

“African government structure will have to improve dramatically for this to be sustainable.”

And he lambasted the current Economic Partnership Agreements (EPA) between the EU and African states, saying “they are no success story, neither for Africa nor for Europe”.

Nooke said that he agreed with the general sentiment that the EPAs “are not an agreement, and it’s not a partnership”.

And he said the current state of trade between Africa and the EU was “almost irrelevant”, beyond natural resources such as cocoa and coffee beans, “and some diamond-cutting in Botswana.”

The African economy as a whole was “very, very, very weak”, he warned, and that there was “no energy infrastructure for renewables” in place.

Günter Nooke, Angela Merkel’s representative in Africa, has called for a rethink of international approaches towards Africa, in an interview with EURACTIV Germany.

Moving on to the political outlook, Nooke said he agreed with Rwandan President Paul Kagame’s recent report on the state of the African Union, which found it “dysfunctional” and “facing another decade of lost opportunity.”

The African Union “needs institutional reform” because the challenges are huge, Nooke warned.

Whilst the African Union, based in the Ethiopian capital Addis Ababa, has a new set of commissioners, welcomed by all the panel, currently, negotiations on a post-Cotonou trade agreement between the African, Caribbean and Pacific (ACP) state and the EU are mired in delays. The Cotonou Agreement is due to run out in 2020.

But Nooke also had stern words for Brussels, saying that while the EU had “great experience in regional Free Trade Agreements (FTAs) and customs unions, it could share that experience [with the African Union] but Directorate General Trade here in Brussels has to change.”

He did not specify what those changes would be.

Nooke made it clear that as far as Germany was concerned, for any Africa-EU summit to work, it “needed north Africa on board”, a reference to the ongoing civil war in Libya, and the military dictatorship in Egypt.

Africa is currently struggling with a drought on the brink of famine in South Sudan, Somalia and northern Nigeria, plus troubled or fragile democratic transitions in Gambia, Gabon, DR Congo and the Central African Republic.

The African Union Ambassador to the EU, Ajay Bramdeo, said that while the German Marshall Plan for Africa was “interesting”, it should have been drafted as a plan “with Africa”, rather than “for Africa.”

He was supported by the audience, where the Zimbabwean ambassador to the EU queried whether there had been “any African involvement” in the German Marshall Plan.

In a good-tempered but frank exchange of views, Bramdeo apologised for “bringing inconvenient realities to the fore”, but warned that neither Europe nor America had first developed as democracies before their economic development, telling delegates to “read any history book”.

“We are not anti-democratic,” he continued, “but who gets to decide if there is enough [democratic] progress to get a carrot [aid]?”

For the European Union, the Deputy Managing Director for Africa at the External Action Service, Birgitte Nygaard Markussen, said that the EU had shown courage in the Gabon, as well as Gambia, by challenging rigged elections through its election observer missions.

Whilst Geert Laporte, of the  European Centre for Development Policy Management, agreed with that. He pointed out that these were “easier” targets than they key strategic states such as Egypt and Ethiopia, where the EU has been accused of turning a blind eye to crackdowns and human rights abuses.

Laporte, deputy director at the ECDPM, also warned that EU and Western peace initiatives in Africa “create addiction and dependency”, whilst the plethora of international summits on Africa usually failed “to tackle hot potatoes in case it spoils the atmosphere”.

And – echoing one of Nooke’s worries – he said that the “demographic explosion in Africa is like living on top of a volcano”, pointing to estimates of a doubling of the population to 2 billion people by 2050, and possibly 4 billion by 2100.