Volunteers prepare food for dinner at the shelter reception of the organisation 'Tous Migrants' (All Migrants) in the town of Briancon, southeastern France, 16 January 2018. [EPA-EFE/GUILLAUME HORCAJUELO ]

Austerlitz Station, an April morning, Mohammed gets off the Briançon-Paris night train with a few other migrants from West Africa. Their journey to the French capital has come to an end.

After having crossed the Sahara, the Mediterranean and then the Alps, the Briançon-Paris train is the last step on their long and dangerous journey. The 44-year-old Guinean left his wife and children at home to come to France, find work and send money back to his family.

In the hustle and bustle of the grands boulevards in Paris, Mohamed is intimidated, before meeting a distant cousin who lives in the city. Mohamed hesitantly asks: “How does it work here with papers? What should I do?”.

Mohamed is one of forty other migrants who arrived in Briancon from Italy by crossing the Col de l’Echelle, on 22 April.

Escorted by French and Italian activists, the small group crossed the lowest point of the Alps (1760 metres above sea level) during a solidarity march organised in response to a demonstration staged by extreme right activists from the political youth movement Génération Identitaire. 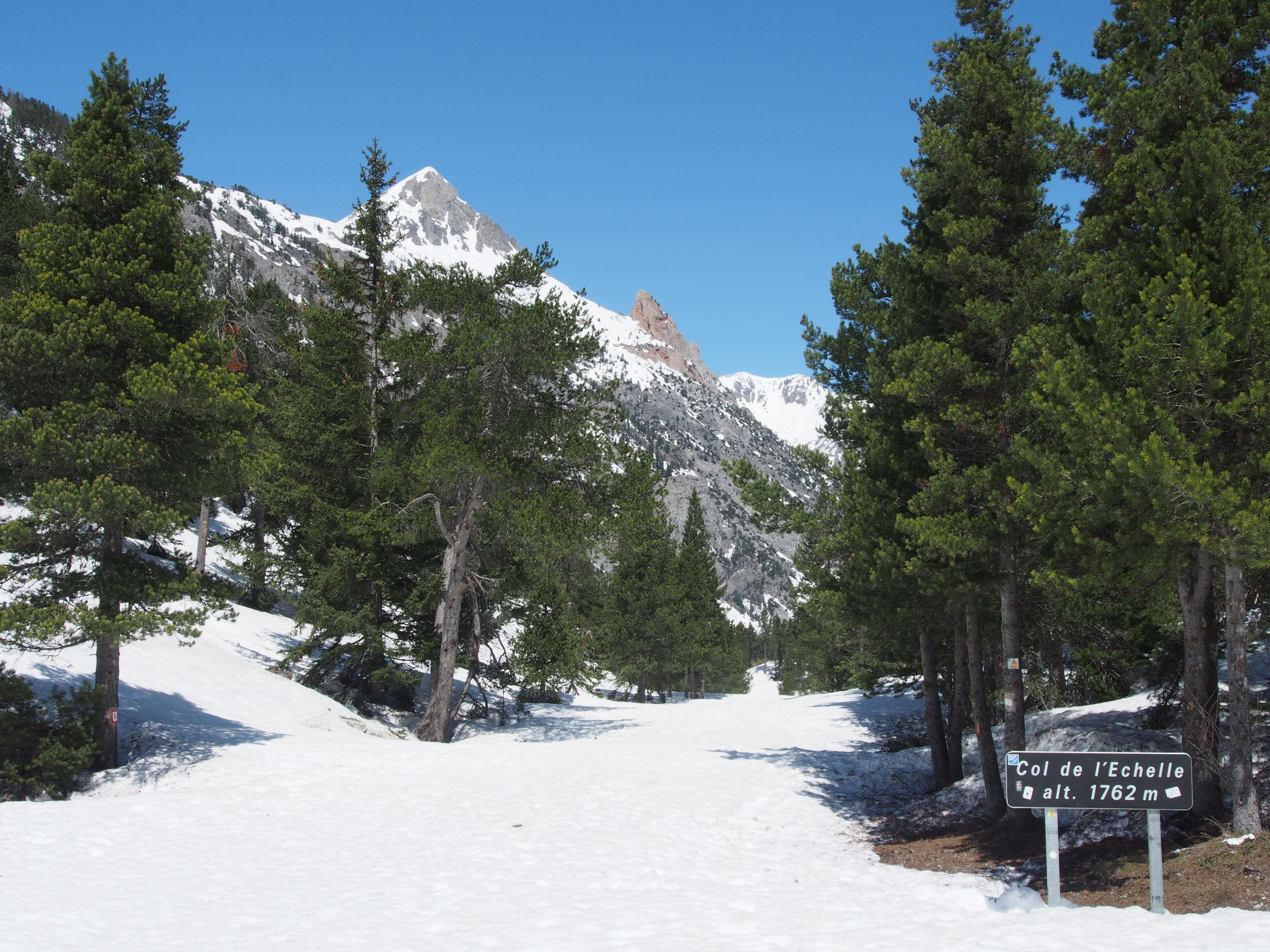 The day before, some hundred activists from Génération Identitaire had set up a border with fences and signs telling migrants to go back home. The heavily broadcast event shocked Briançon and the neighbouring village of Névache, where a number of inhabitants had helped accommodate the ever-growing number of migrants who had decided to cross the Alps.

Used as a passageway by refugees from the former Yugoslavia during the 1990s, the l’Echelle and the Montgenèvre pass are once again being used by a growing number of migrants.

In the beginning, only a few Sudanese crossed the pass, now groups with dozens of young people, mainly from Cote d’Ivoire, Mali and Cameroon  (some of whom are still minors), cross the border using this passage.

From Turin, the migrants reach the village of Bardonecchia on the Italian side and then climb the Col de l’Echelle, before arriving in the village of Névache, an hour away from the border.

The solidarity movement for migrants started here, in Nevache.

“One early morning in January, I went up to pack the snow on the cross-country trails at the Col de l’Echelle. As I was driving by the second time, I noticed footprints in the snow I had just packed, then I saw two completely frozen Africans,” recalled Bruno, a ski slope operator in Névache.

“I took them in my snow groomer and drove down to Névache. That winter, I found around 50 other migrants,” he said.

This pushed some Nevache inhabitants to organise emergency help, a place for them to stay and a warm meal. At the local level, solidarity works at full speed, “but what is hard is that the government does nothing, the citizens find themselves doing the government’s work”.

The department’s prefecture has taken no action on the grounds that a reception centre might incite more migrants to come.

“Though we tell them not to come and to tell others not to cross in the winter, they don’t listen. On the Italian side, warnings on the danger of crossing the col also go unheeded. Neither the snow nor the stronger border controls stop them. After having crossed the Sahara and the Mediterranean, the Alps won’t stop them, even those who are sent back to Italy by the border police come back the same way two days later,” said Bruno.

“Our greatest fear is finding dead bodies once the snow melts.”

“We try to inform everyone when they arrive at Bardonecchia station by showing them photos of avalanches. Right now, the passage is particularly dangerous because of the high risk of avalanches,” said Silvia, an Italian activist.

However, it is difficult to keep migrants in Italy. “A lot of these migrants should have finished their journey in Italy as they could have obtained resident permits, but they refuse to do so as they had very difficult experiences in Italy,” said Silvia.

“When they arrive, the first thing they need after having crossed the col is physical and mental rest,” said Bruno. The village of Névache is just a mere stop-over before Briançon and then Paris, Spain or the UK.

In Briançon, a welcome centre has been established by the communes, and is managed by volunteers. “The solidarity refuge” has been used as an accommodation centre for migrants since August 2016.

In the kitchen, several volunteers are busy making lunch with the help of migrants. Several salad bowls filled to the brim will be served to the 70 migrants currently staying at the centre. 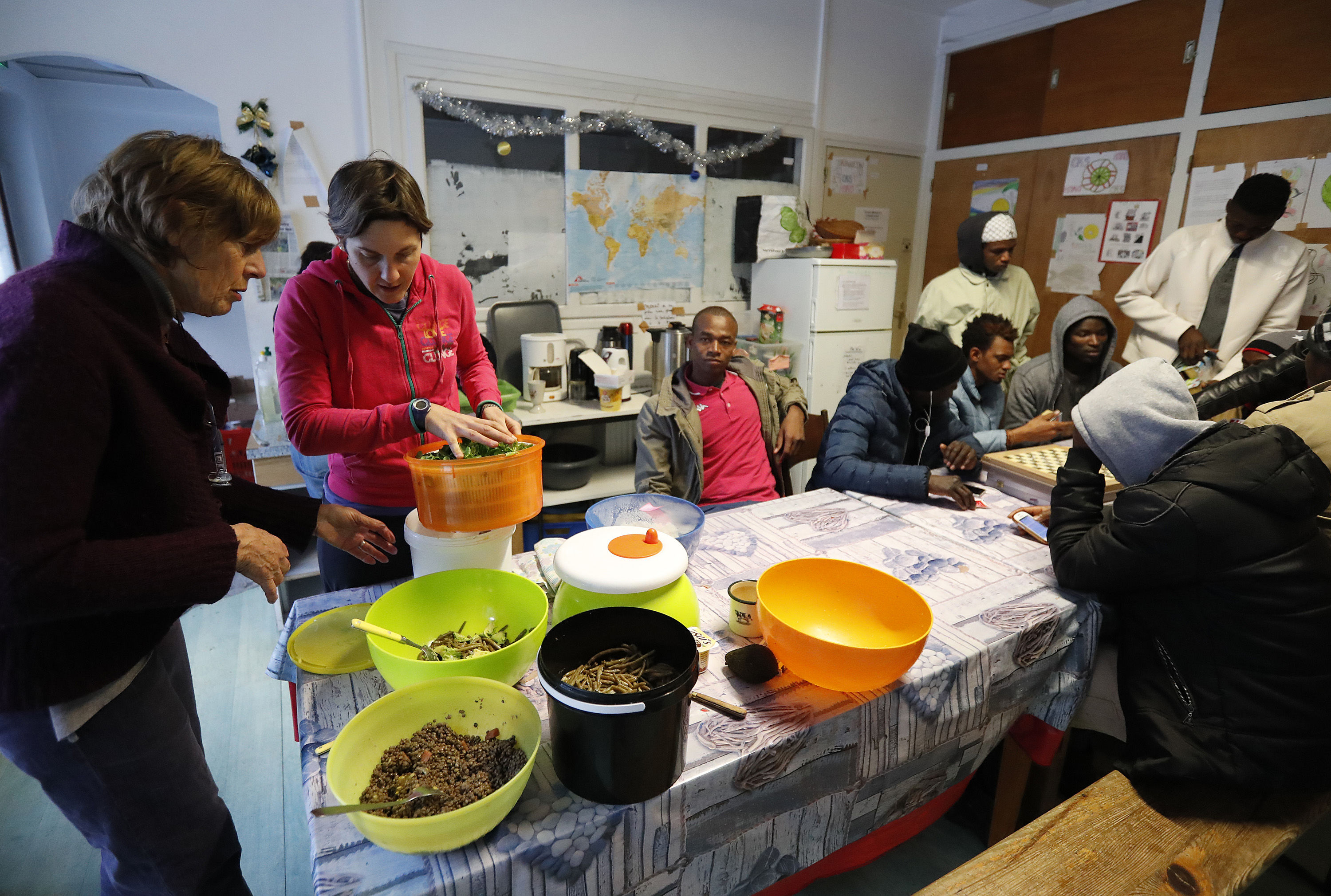 Volunteers prepare food for dinner at the shelter reception of the organisation ‘Tous Migrants’ (All Migrants) in the town of Briancon, southeastern France, 16 January 2018. [EPA-EFE/GUILLAUME HORCAJUELO ]

“Only a few help out,” said Marie-Odile, who is in charge of the kitchen. “I hate cooking, but as the person who is usually in charge had some health problems, I had to take over.”

Beyond the food and shelter, the centre also informs migrants of their fundamental rights. Sitting in front of the centre, Amadou Coulibaly listens to advice from Joel, a volunteer at the centre.

“If you are arrested by the police, show them this,” said Joel, showing a printed sheet with a list of basic rights that are too often forgotten during police checks: the right to an interpreter, the right to call a lawyer and a doctor… ”We’ve heard a lot of stories of illegal deportations, in the middle of the night, in the middle of winter, or even deportations of minors,” said one inhabitant.

Amadou had already been deported back to Italy, “Its the second time I’m crossing, the first time the police caught me and took me back to Italy, but I came back,” he said.

The centre is the only reception centre in the city and receives no subsidies from the government. Everything in the centre works thanks to volunteers and donations, however, this is becoming more challenging with the rising number of migrants.

“The closure of the road by the Roya valley has pushed migrants to use the Briançon road,” said Marianne, another volunteer.

“Last week, around 150 people arrived within two days. We don’t have the capacity to shelter so many people so we used the Briancon train station to shelter those we could not take in,” said Camille.

However, this triggered the anger of some inhabitants: “You cannot turn public places into wild shelters like that, it’s impossible to welcome everyone in Briançon, it’s too small,” one resident commented.

With only 12,000 inhabitants, the passage of some 5,000 migrants in a few months has not gone unnoticed. Although a few migrants have decided to stay in Briançon, it is mostly a passing point on the migrants’ journey. The day after the solidarity march some migrants left for Barcelona and Paris. 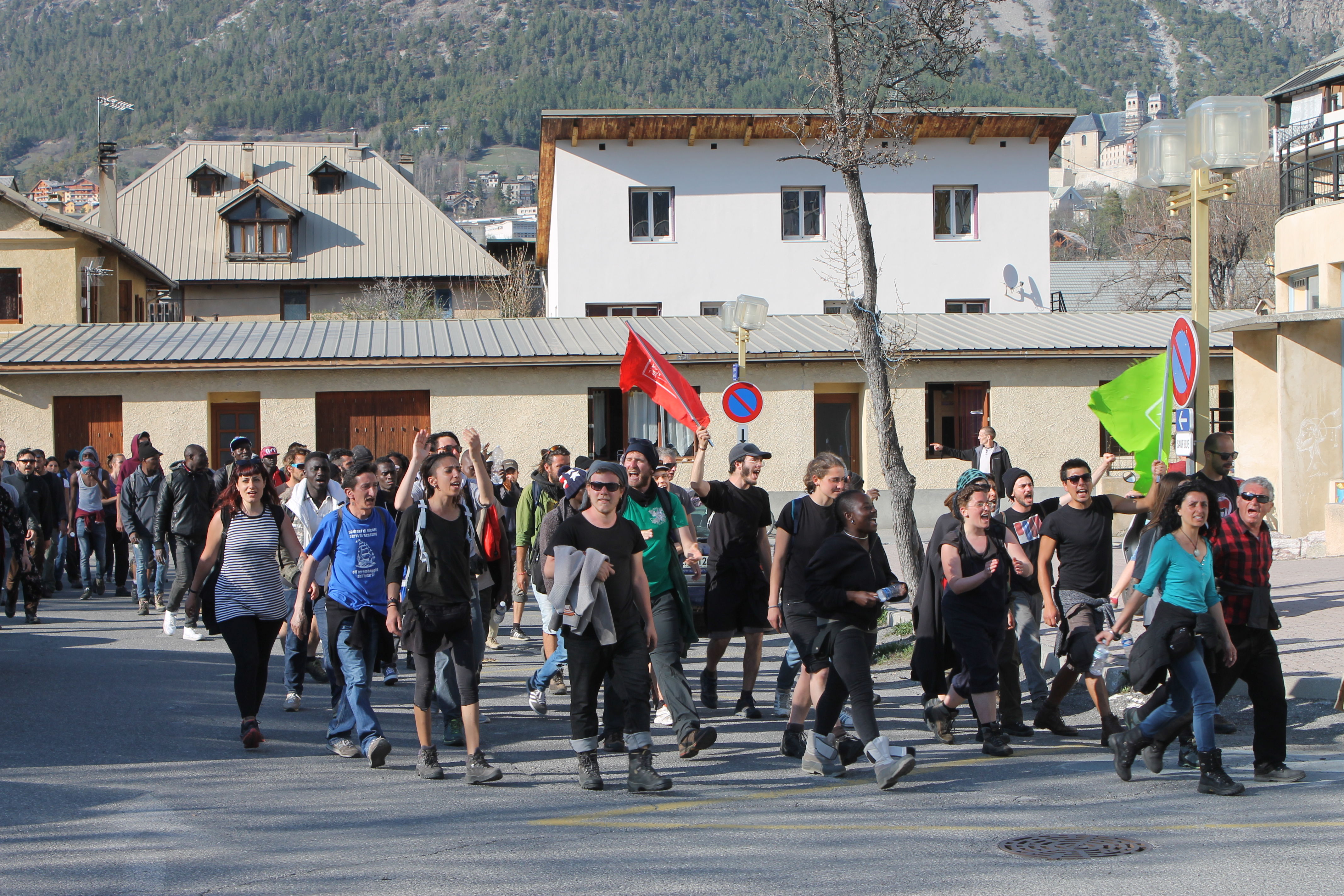 The only structure supported by public funds, the MAPEmonde mission (mission to welcome foreign people) of the Briançon MJC- social centre, had its subsidies cut in 2018.

The association was in charge of two regional orientation centres set up by the government in 2015 to send migrants from the Calais camps, or Stalingrad Square in Paris. It also accompanied the asylum applications of migrants arriving from Italy.

“We wondered whether we should let them go to Calais or Paris, where they would spend months sleeping outside before being sent back here, or whether it would be better to help them from the beginning,” said Luc Marchello, in charge of the mission.

The association now helps migrants with their asylum application procedure. Twenty-four of them currently await the decision of the OFPRA (French Office for the protection of refugees and stateless persons).

However, the association’s public funds, allocated by the European funds for asylum and migration, have been blocked by the Haute-Alpes prefecture, a decision that could lead to the end of the mission. “This is clearly a political veto to Briançon’s commitment to welcome migrants,” said Luc Marchello.