Protesters who are Muslims pray on a barricaded road during a protest against the Nigeria rogue police, otherwise know as Special Anti-Robbery Squad (SARS), in Lagos, Nigeria, 21 October 2020. [Akitunde Akinleye/EPA/EFE]

Nigeria’s president has urged an end to unrest sweeping the country but avoided mentioning the police shooting of unarmed demonstrators that sparked international condemnation and unleashed chaos in Africa’s biggest city.

Lagos has seen shootings, looted shops and a prison set ablaze since security forces this week opened fire on peaceful protesters calling for better governance and an end to police brutality in the city of 20 million.

Amnesty International said Nigerian soldiers and police gunned down 12 demonstrators, while 56 have died overall across the country since a wave of protests began two weeks ago.

President Muhammadu Buhari warned protesters on Thursday not to “undermine national security” in his first national address since Tuesday’s incident, which he avoided mentioning directly.

Instead, he blamed agitators who he said had “hijacked and misdirected” the protest movement.

“Under no circumstances will this be tolerated,” Buhari added.

The 77-year-old called on the youth to “discontinue the street protests and constructively engage government in finding solutions”. 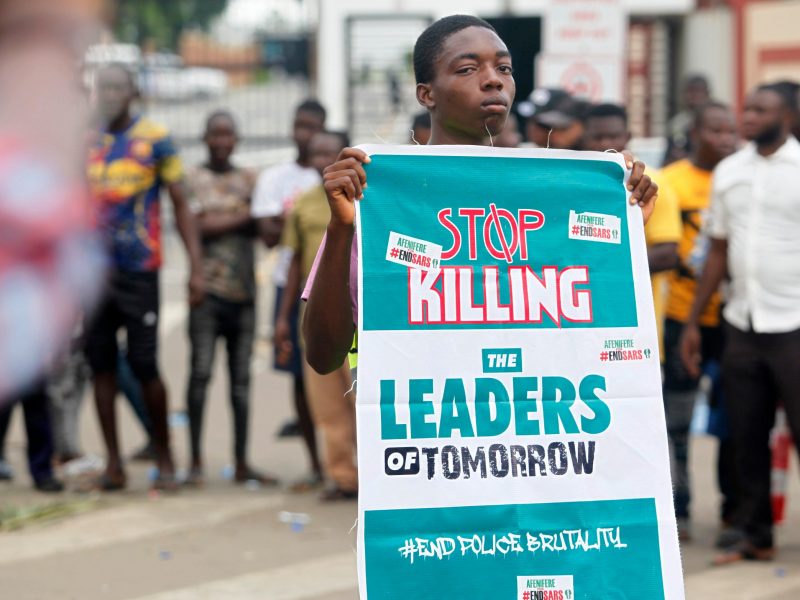 The European Union’s foreign policy chief Josep Borrell on Wednesday (21 October) condemned the killing of protesters demonstrating against police brutality in Nigeria, and called for justice.

US Secretary of State Mike Pompeo called for an immediate investigation into violence by security forces but Buhari has brushed off all foreign rebukes.

“We thank you and urge you all to seek to know all the facts available before taking a position or rushing to judgement and making hasty pronouncements,” he said.

Sporadic gunfire was reported for the second day in Lagos on Thursday despite a round-the-clock curfew.

Buhari’s uncompromising line stirred immediate anger online and looked unlikely to quell widespread ire in the face of one of the biggest crises of his tenure.

“Anybody notice that the President couldn’t even acknowledge the lives lost and people injured because of trigger happy policemen?” wrote Nigerian actress Kemi Lala Akindoju on Twitter.

“No empathy. No hope. No taking responsibility. No leadership,” she added.

Protests erupted in Nigeria two weeks ago over police brutality by the loathed Special Anti-Robbery Squad.

Buhari scrapped the unit and pledged reforms but the demands from the young protesters broadened to calls for more sweeping change.

Authorities said the demonstrations were increasingly being taken over by criminals as violence flared and sought to shut them down.

“Sadly, the promptness with which we have acted seemed to have been misconstrued as a sign of weakness,” Buhari said in his speech.

Nigeria’s army has denied that its soldiers opened fire on demonstrators on Tuesday.

But UN High Commissioner for Human Rights Michelle Bachelet said there were signs the attack was “premeditated, planned and coordinated”.

The incident unleashed a wave of major unrest on the streets of Lagos that has seen supermarkets emptied and prisons attacked.

Authorities insist the violence is being carried out by “hoodlums” and have sent the army out into the city to restore order.

In the middle-class neighbourhood of Lekki, soldiers had taken control of the streets by Thursday afternoon.

But the burnt-out husks of official buildings, smouldering wreckage of cars and smashed shopfronts testified to the ferocity of the mayhem.

“Now they have seen what we are capable of,” one angry youth said. “We are just hungry, we are tired.”

In another district, a warehouse holding food that was meant to be distributed to poor residents impacted by coronavirus restrictions was ransacked.

Further east in oil-rich Delta state, authorities ordered a 48-hour curfew after incidents of arson, robberies and attacks on a prison and other public buildings.

Nigeria — which has a median age of 18 and the highest number of people in extreme poverty in the world — is a tinderbox of deep grievances.

Africa’s biggest oil producer and largest economy is facing a profound recession after the coronavirus prompted a fall in crude oil prices that crippled state revenue.