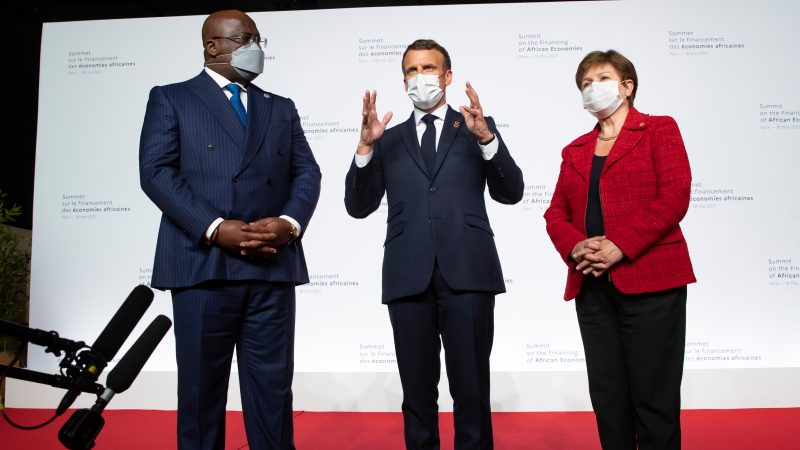 French President Emmanuel Macron is the only leader to have promised to donate his country's share of the new IMF Special Drawing Rights to developing countries. [EPA-EFE/IAN LANGSDON]

The response to the COVID pandemic is opening up a yawning economic divide between the world’s wealthy and poor countries, particularly African nations, who lack the budgetary firepower to finance stimulus measures, writes Edwin Ikhuoria.

Edwin Ikhuoria is the Africa Executive Director for ONE.

Almost two years since the pandemic started, there have been more than 230 million cases
and 4.5 million deaths around the world. To date, there have been over 8 million reported
infections and over 200,000 reported deaths caused by the novel coronavirus in Africa.

Moreover, more than 97 million people globally have been pushed into extreme poverty, a
historically unprecedented increase. And the financial situation is not getting better: African
economies are facing a serious liquidity crisis as governments desperately try to build up and
recover from the effects of the pandemic.

We have seen some glimpses of hope, in attempts to deliver a global response to the
pandemic. Last April, G20 Finance Ministers and Central Bank Governors supported a debt
suspension initiative until December 2021 for the poorest countries, which would enable up to
$10 billion to be used for pandemic response instead of interest payments.

These funds are distributed to all IMF members as reserve assets called Special Drawing Rights (SDRs). This new source of finance could not only help countries to purchase CoVID-19 vaccines or life saving healthcare treatment, but also finance their economic recovery, at such a critical time that Africa is struggling to recover from its worst recession in 25 years.

However, while some wealthy countries can afford to go back to normal, the poorest countries are still in the midst of the pandemic, with a large share of their populations unvaccinated, cases and deaths still on the rise and a very slow or even stagnant economic recovery.

While the United States, for example, has fully vaccinated more than half of its population, Africa has only vaccinated 3%.

We see two worlds growing further apart and a two-track economic recovery, the immense consequences of which we are only starting to realise.

Considering how the SDRs are distributed, G20 countries received most of the allocations, while countries in Africa received only $33 billion, with the biggest share going to the five largest markets on the continent – South Africa, Nigeria, Algeria, Morocco and Egypt.

So while half of the world is already future-proofing for the next pandemic, having secured the
highest vaccination rates and spent trillions on shoring up its economy, the other half continues
to be overwhelmed by the aftershocks of the pandemic.

According to the International Monetary Fund/ ONE Africa COVID-19 Tracker, countries in Africa will need to repay $54 billion in debt next year, and will need $285 billion by 2025 to respond to the pandemic.

There is no clear recovery plan or mechanism in place to secure these resources. Looking at these figures, the $33 billion Africa has received looks like a drop in the ocean. If the G20 is serious in fulfilling its promise to secure an inclusive and sustainable economic recovery, we need to free all the available resources for the most vulnerable countries.

Sharing SDRs and solving the looming debt crisis could offer a solution and help to reduce the lifetime impact of the crisis.

France’s announcement last weekend that it will donate, or as it’s officially known, recycle 20% of its SDRs is welcome news.

While France is the first country to make this commitment, the President of the European Council, Charles Michel, and European and African leaders, in May last year, called for countries to rechannel these resources to reach an initial target of $100 bn for African countries as part of his call for “A new deal for Africa”.

Yet five months later, France is the only country to step up to being part of the economic solution for developing countries.

In order to put a stop to this growing economic divergence, much more is needed from
advanced economies and more countries should follow France’s leadership. By the end of
2021, advanced economies should be able to commit to donating at least a quarter of their
allocations to reach the initial $100 billion target by the end of the year.

Failure to do so will not only prolong the pandemic but will also result in millions more facing extreme poverty, waves of defaults, inability to invest in jobs to restart economies and a lost decade for development.

It is in the hands of G20 leaders to make bold decisions that will save many lives and
livelihoods. Should the recycling and reallocation of SDR’s be done credibly, it could help
African countries deal with CoVID-19, create more jobs and manage other pressing challenges.

It would also help to build trust that there is solidarity between the global north and south as we
deal with other common challenges like climate change.

As the global economic divergence continues to exacerbate, the World Bank Annual Meetings (ahead of the G20 Leaders’ Summit) should be a key decisive moment for advanced economies to support a global recovery from the pandemic.

We must stop this great economic divergence that risks splitting the world in two; if we claim that “we are all in this together” now is the time to make this true.