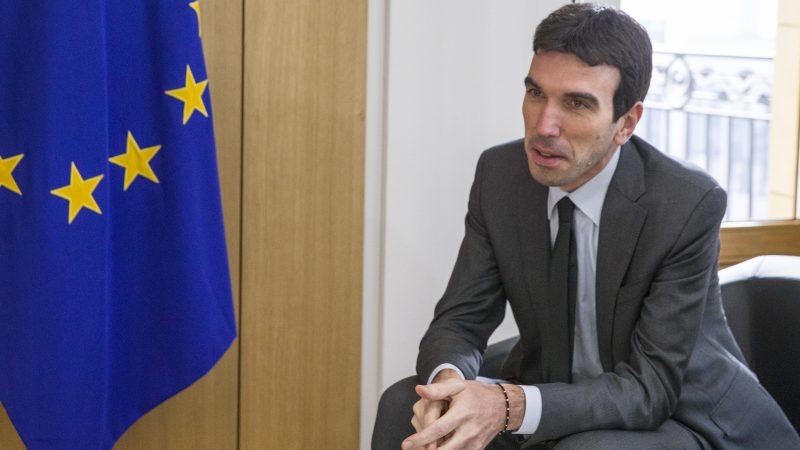 Maurizio Martina is the deputy director of the United Nations Food and Agriculture Organisation (FAO) and former Italy's minister of agriculture. [EU COUNCIL]

Maurizio Martina is the deputy director of the United Nations Food and Agriculture Organisation (FAO) and former minister of agriculture of Italy. He spoke to EURACTIV’s agrifood editor Gerardo Fortuna.

The latest Food Price Index published by the FAO last week showed that world food commodity prices have reached their highest levels ever. How do you see the current situation?

Even before the conflict, we saw a rise in key international agricultural prices for more than a year and a half. Both the pandemic and some radical climatic and environmental changes have had a major impact on some agricultural products and their prices in certain areas of the world.

What is happening dramatically in Ukraine only makes the situation even worse. Today, we are faced with a scenario where the increase in prices of agricultural goods will be, at least within certain levels, a constant variable at least in this next period, also because, as we know, it intersects with the energy crisis which has a very strong impact on agricultural issues.

What are the differences between this and the previous global food prices crisis in 2008?

The 2007-2008 crisis too came after a very significant increase in oil prices. The first phase of the emergency was managed with some protectionist policies that did not really solve the problem but increased the situation of uncertainty and fragility.

We gradually came out of it by reorganising the dynamics of global flows of goods. Even the COVID-19 crisis, in its first phase, pushed us to some protectionist initiatives, however, we soon overcame that stage and flows remained open.

But the current situation also has some new elements because there is a war and because the impact of climate change on agricultural production is now more significant. By building on past experience, we must avoid making certain mistakes.

For example, the fact that we did not immediately work on building policies to intervene in food security and global supply chain issues, which are fundamental. Reaction times to these situations are decisive.

We should also consider the fact that some global agricultural products may present certain problems. But the fact remains that we need to understand where the demand is and where the supply is, and how to match this demand and supply.

There is no doubt, for example, that as far as our work is concerned, a key observation at this time is to understand the impact of this dynamic on developing countries, on the most sensitive countries.

Which countries, in particular, are of concern?

Certainly, looking at some data such as food inflation in some already sensitive contexts, we cannot but be concerned about what may happen. I refer, for example, to the analyses also made recently on the top 10 countries for food inflation and you can see that they are concentrated in some areas of the world.

The EU’s response has been focused on the production side so far. Was it the right choice?

It is important to move forward by holding together all sides of this big issue. There is a question of managing the short to medium term, and therefore I understand some of the choices made by the European Commission lately to accompany this phase.

I also understand that we need to hold firm to certain strategic objectives that the European project has set itself in transforming the model of European agricultural models. The EU must make the effort to keep all the sides of this issue together, trying to find positive compromises going forward, while always keeping the fundamental strategic objectives on the table.

It makes perfect sense for Europe to think about reorganising the fundamentals of the model in terms of strategic autonomy, especially after the pandemic, the conflict and the energy costs we are facing. In other words, I would be surprised if the EU would have done the opposite.

Alongside this internal response, what should be the EU’s role at the global level in this crisis?

The other great ambition that the European Union must always have is that of being a global player in the ecological transformation of the system, trying to keep the front line of policies that accompany this transition in an open way.

Let me be clear, nobody here thinks it is simple. On the other hand, I believe that Europe must continue to interpret its ‘open’ vocation and therefore hold together this elaboration on strategic autonomy which refers to an idea of cooperation between different systems that nevertheless work together.

Speaking of keeping trade ‘open’, do you expect countries to introduce export bans in the future?

I hope not. I honestly think we have to try to keep the flows open, especially the flows of key agricultural goods.

The EU is also pushing on the concept of food sovereignty to cope with the crisis.

Reflecting on the nature of food sovereignty is a major issue, especially at the present time and I think this reflection goes beyond Europe. I have always interpreted the idea of food sovereignty as being deeply rooted in territorial realities, but open to everything that is not there.

I am afraid of a closed idea of sovereignty, and I don’t want to confuse sovereignty with ‘sovereignism’ [ed: political movement close to the alt-right advocating for the reacquisition of state sovereignty in certain aspects]. For me, sovereignty is a value and we need to think about how a modern idea of food sovereignty can actually be implemented.

Food sovereignty for me is not just a question of what we can do for ourselves. I still think that we have to balance sovereignty and openness and I am scared of the idea of ‘closed’ sovereignty. In my opinion, it is in that balance between openness and sovereignty that we find the right approach.