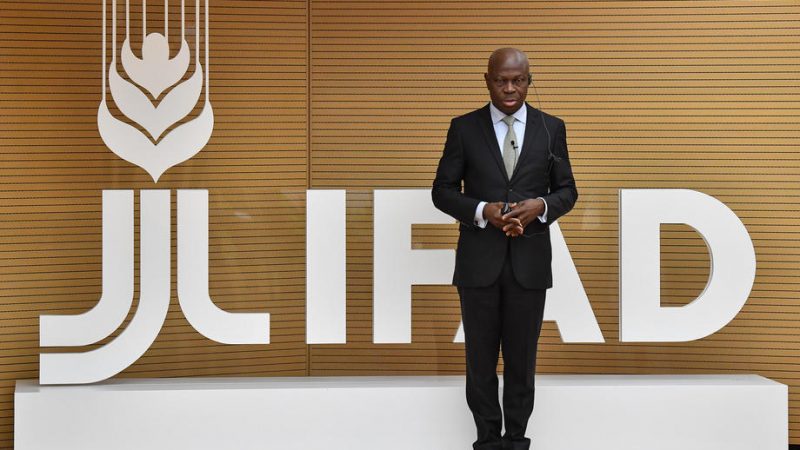 This article is part of our special report Accelerating climate smart agriculture in Africa.

Europe’s push to decrease over-reliance on third-country food production is unavoidable due to the pandemic. Still, it could come in handy for encouraging African domestic production, according to the president of the UN’s Rome-based International Fund for Agricultural Development (IFAD).

Gilbert F. Houngbo is the president of the International Fund for Agricultural Development (IFAD) and former prime minister of Togo.

European and African leaders are gathering in Brussels this week (17-18 February) to relaunch their partnership. What could be the role of agriculture in these talks?

Speaking in general terms, it is about time these two economic and political groups really take stock and re-galvanise their partnership because of many pending issues, from the sustainable development goals in general to climate change and economic migration, not forgetting the situation in the Sahel and the pandemic.

When it comes to agriculture, we know that this sector contributes to around 20% of the African countries gross domestic product (GDP), while two-thirds of the African population live in rural areas. Also, in Sub-Saharan Africa, more than 50% of the working population is employed in the agriculture sector.

At the same time, we have 12 million youngsters entering the African labour market every year. Clearly, the agriculture sector remains an important opportunity to create jobs for those youth. And I will particularly insist on the role of small-scale farmers, responsible for up to 70% of Africa’s ‘calorie intake’, so to speak, namely 70% of the production.

Did the COVID crisis worsen the situation for these people?

Unfortunately, the World Bank had estimated that around 100 million people had been pushed back below the extreme poverty line after the pandemic. Out of that, 30 million of these people are in Africa, where most countries remain either low-income or lower-middle-income.

We can also see from our activities on the ground that some producers have started selling their production resources because of economic distress, which means that they wouldn’t even have the equipment to continue their production. And that makes the situation even worse.

What can be done to reverse this scenario?

I think access to technology can play a role in response to COVID. We need to increase our investment in resilience and technologies at a different level: not only technology that will help us improve productivity from the human resource productivity perspective on the farm, but also in terms of total factor productivity.

Africa imports US$ 70 billion [€61.5 billion] in food products per year, so when the whole transportation system comes to a standstill, we have to rely on domestic production. But our domestic production cannot sustain this need if it is not competitive and if productivity is not improved, mainly through technology. This is why, at IFAD, we are working together with the Africa Development Bank on bringing technology down to the small producers in the rural area.

You mentioned a focus on domestic production, and the EU is also pushing on the concept of food sovereignty to avoid disruption caused by overreliance on other countries.

This principle of food sovereignty has to be balanced with the reality of life: we’re not going to live in a world where each country can only count and rely on itself. We must uphold multilateralism and continue working for better globalisation because the world will remain connected and dependent on others.

It seems to me that food sovereignty is a relative term because Europe cannot produce all that they need, just like Africa will not be able to produce all that it needs. However, to minimise that dependency from outside is essential, at least for Africa.

But could it be a problem for Africa if Europe decides to rely more on its food sovereignty?

I’m not so worried about Europeans being sovereign in terms of food production. Yes, it could reduce a lot of imports from Africa, which can impact the EU-ACP [African, Caribbean and Pacific] partnership agreement.

But if Africa can do the same with its own continental market, under its continental free trade agreement (FTA), this is a massive opportunity for the continent and growth from agriculture. That opportunity makes me less worried about the independence Europe is pushing for. That push, I believe, is unavoidable when you look at the consequences that we saw during the first month of COVID-19.

But I would like to encourage Africa to push in this direction by increasing the production to tap into it and not only respond to its own demand from a food security dimension. Africa needs to look at it as a business and job creation opportunity for the youth. When you see the current deficit in terms of supply-demand, this could be an opportunity for increasing intra-continental trade as well.

Other than the pandemic, there is also climate change to cope with.

Indeed, climate change is already affecting the producers, and they need to adapt now. Mitigation is essential; it is the long-term solution. But adaptation is also a priority, and quite frankly, with less than 2% of total investment in climate change that goes to small-scale farmers’ adaptation, I’m very much concerned that we might continue widening the gap in terms of our ability to catch up.

Speaking of investments, what is the future for development aids and international cooperation?

I sense that between the lines of this question is the issue of aid effectiveness. I agree we need to have that discussion. I am among those who believe that aid is just a palliative and will not bring Africa out of poverty. We Africans have to make it by ourselves, by creating wealth and better managing our resources. Only this will get a long-lasting result.

But aid is a helper and remains an essential helper. After 60 years of independence in most African countries, we need to look at what has worked in international aid and what has not.

According to you, what has not worked, and who’s to blame?

I believe the responsibility lies on both sides. We Africans have an obligation in terms of good governance, maximising tax collection, fighting corruption, and better use of resources. On the flip side, international donors also have to meet their commitments. I don’t call for more commitment; I’m calling for the existing commitment to materialise.

We’re not going to the summit in Brussels just for taking commitment over commitment yet again. We need concrete action and, I can’t repeat that enough, we need to remind ourselves that those who are really suffering and those below the poverty line are the rural people. Eighty per cent of the world poorest are in rural areas.

It is also essential that rural people have a voice in determining their future and take part in defining and conceptualising the future they want. It is critical, and we should not have a top-down approach. It is going to be essential that we hear from the rural communities.