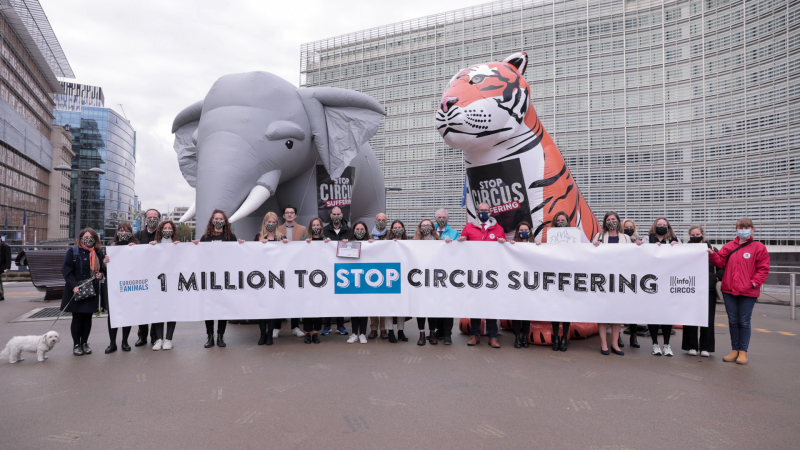 "It’s time to show future generations that animals deserve our respect and protection and should not suffer in circuses," said MEP Anja Hazekamp (The Left). [Photo courtesy of Eurogroup for Animals]

Members of the Stop Circus Suffering campaign gathered outside the European Commission’s Berlaymont building on Wednesday (13 October) to celebrate the collection of 1 million signatures on a petition to ban the use of wild animals in circuses.

The ceremony was led by the animal welfare association Eurogroup for Animals and wildlife protection coalition InfoCircos, who started the petition in 2018. The two groups handed the petition over to MEPs Eleonora Evi (Greens/EFA) and Anja Hazekamp (the Left), who will submit the signatures to the Commission.

“One million citizens have spoken. Now we need to turn this public mobilisation into political engagement. Only an EU-wide ban can guarantee the end of this outdated entertainment and provide a coherent and effective solution to the physical and emotional suffering of wild animals in circuses,” said Reineke Hameleers, CEO of Eurogroup for Animals.

Today marks a huge moment in the #EUStopCircusSuffering campaign. 🎪🐘❌

In a ceremony with @InfoCircos, we handed over 1 million signatures to @EleonoraEvi MEP & @anjahazekamp MEP, who will now submit them to the @EU_Commission. 👏https://t.co/cUhyKhwqNR

In a February 2021 survey across seven member states, the Eurogroup for Animals found that 68% of respondents felt that using wild animals in circuses is cruel and that wild animals should not be used for public entertainment.

“European citizens have had enough of wild animals being abused in circuses,” said Marta Merchan, coordinator of InfoCircos.

Four Paws, one of the 81 animal advocacy groups within the Eurogroup for Animals, was present at Wednesday’s ceremony.

“It is beyond time to end this cruel practice and adopt a coordinated and full ban on the use of wild animals in circuses EU-wide,” said Pierre Sultana, director of the Four Paws European Policy Office.

Nineteen EU member states have adopted national bans on the use of wild animals in circuses, three of which prohibit the use of all species, according to a recent report from the Eurogroup for Animals.

The UK and five EU member states have brought forward general restrictions to protect animals in circuses. Still, the organisation says regulations tend to differ between countries and do not yet exist in several member states.

Many EU countries still allow circus animals to be transported across their borders to get to countries without restrictions where the circuses can perform. This poses a severe public safety risk and health and welfare risks for animals, experts said.

“Wild animals in circuses greatly suffer from physical and social deprivations, and their training is frequently based on punishment. Animals who are forced to live in unnatural conditions can react in ways which pose a risk to their tamers,” Evi said.

Organisation leaders emphasised the importance of an EU-wide ban because national bans do not prevent the cross-border transportation of wildlife.

Eurogroup for Animals recorded 14 EU countries with a total of 254 circuses that house wild animals. Germany topped the list, with 75 circuses and approximately 200 wild animals, excluding camelids (a category of animals that includes camels, alpacas and llamas).

The report also includes information on rescue centres and sanctuaries in Europe and South Africa, all of which have been deemed “particularly appropriate to rescue circus animals.”

“Public support for the use of wild animals for entertainment is long gone,” said Hazekamp. “It’s time to show future generations that animals deserve our respect and protection and should not suffer in circuses.”