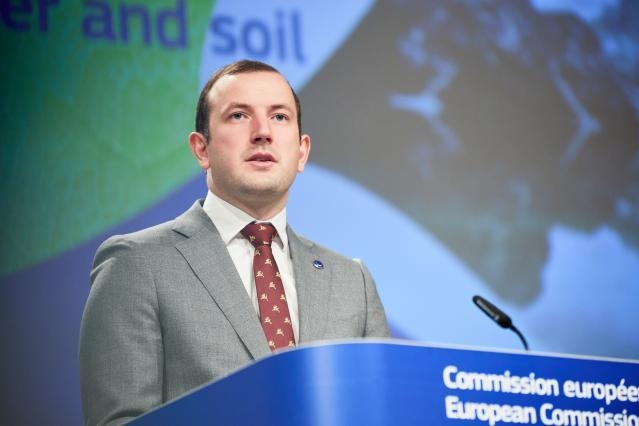 "More and more countries are on board, we feel that the momentum is there and that we need to broaden the scope of the discussion [on soil protection]," EU's Environment commissioner Virginijus Sinkevičius told reporters. [CENTONZE/EC]

Presenting its Zero Pollution Action Plan (ZPAP), the EU executive anticipated that a new soil strategy will be launched this Autumn to assess the status of European soil and take action against its degradation.

According to the EU’s Environment commissioner Virginijus Sinkevičius, the strategy will provide an overarching policy framework for soil restoration.

“The Commission will develop measures to significantly increase efforts to identify, investigate, assess and remediate contaminated sites so that by 2050 soil pollution will no longer pose a health or environmental risk,” the ZPAP reads.

However, the Commission is not going to make this policy framework legally binding, despite recent calls for this from the European Parliament.

In a resolution approved on 28 April, MEPs noted that, contrary to water and air, there is currently no coherent and integrated EU legal framework for protecting Europe’s soil, as measures on soil protection are among a list of policy instruments that lack coordination and are often non-binding.

Nevertheless, the Commission will only propose legally binding measures on soil protection in the context of the EU’s nature restoration plan, aiming at restoring damaged ecosystems and ensuring their sustainable management.

The cornerstone of this plan is expected to be a legislative proposal to establish legally binding nature restoration targets at EU level, which will touch on soil restoration.

For instance, the nature restoration targets will develop an EU priority watch list for soil contaminants as well as guidance, such as a passport for the safe, sustainable and circular use of excavated soils.

In a press briefing, Sinkevičius defended the EU’s actions.

“More and more countries are on board, we feel that the momentum is there and that we need to broaden the scope of the discussion,” he told reporters.

“We never guaranteed that it is definitely going to work, but definitely there is a different political landscape opening at the moment,” he added referring to the EU’s flagship environmental policy, the Green Deal and, in particular, to its Biodiversity Strategy.

However, environmentalists have accused the Commission of a lack of ambition.

According to the European Environmental Bureau (EEB), the Commission has missed another opportunity to commit to new legislation addressing soil pollution.

“What Europe needs is a stand-alone legal framework to protect soil, similar to the framework that is already in place for water and air quality,” said EEB policy manager for agriculture, Bérénice Dupeux.

This is the only way, she added, to reduce pollution and ensure our soil is able to produce healthy food free of harmful substances.

A first attempt to create an EU-wide legal framework for the protection of soil was conducted by former environment Commissioner Janez Potočnik ten years ago but was scrapped by national governments.

An estimated 2.8 million soil sites are potentially contaminated across the EU, of which 390,000 are expected to require remediation, according to Commission data.