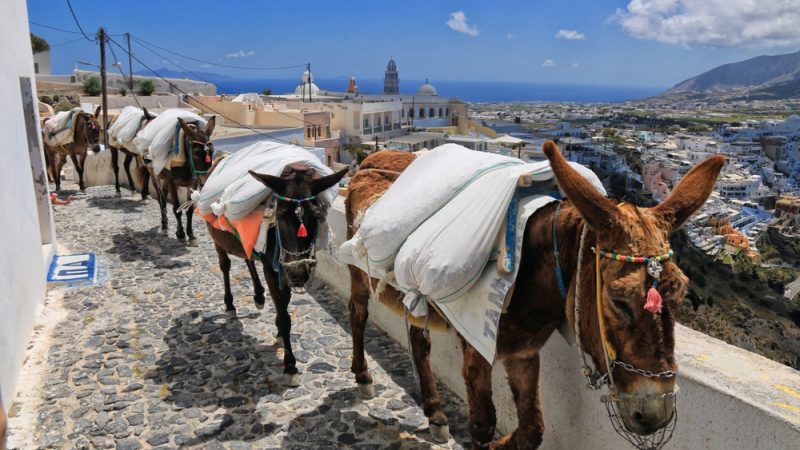 Bobolaki: “The only thing that will stop this misery is its prohibition by law.” [Shutterstock/RayPJ]

Activists are calling for an immediate ban on the practice of using donkeys as “taxis” for tourists in Greece, saying that an awareness campaign will not be sufficient to put a stop to the cruel tradition.

“Of course no campaign is going to change the situation, maybe some improvements will occur but the topic will be forgotten again and everything will be the same as before,” Natassa Bobolaki, the President of the Greek Animal Welfare and Environment Federation, told EURACTIV.com.

“The only thing that will stop this misery is its prohibition by law,” she added.

Several media reports in the past have dealt with the issue of donkey-taxis and other equines on the island of Santorini.

These animals are used to carry tourists during the summer period and to transport building materials in winter.

According to activists, a number of abuse cases have been reported, involving spinal injuries, saddle sores and exhaustion, while cases of flogging have also been flagged up.

Since 2019, the Naxos Public Prosecutor’s Office, where the island of Santorini belongs, has issued explicit written instructions the island’s police authorities to deal directly with the cases of mistreatment of donkeys and other equines.

However, things have not changed dramatically.

The government decided earlier this week to hold a training seminar for equine owners and drivers in April in Santorini in a campaign to combat the phenomenon.

Critics suggest that this inhuman practice is an “open wound” for Greek tourism while authorities are accused of being reluctant to take legal action against this “tradition”.

Bobolaki said for these species, there is no institutional legal framework in Greece governing their conditions, welfare, and registration, meaning that equine owners are uncontrolled.

“Considering that a horse is a pet animal, we ask for its inclusion to the pet legislation, which needs to be modernised, timely and responsive to the real problems of these animals,” the activist added.

“In Europe’s Greece, we cannot have such situations; Greece is more synonymous with the word animal abuse,” she emphasised.