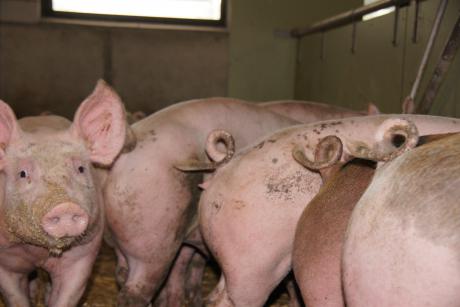 Large-scale animal husbandry is one of the biggest sources of pollution in the agriculture industry, the UBA report says. [LID/Flickr]

Spanning over 50% of the country, agriculture takes up by far the biggest amount of land in the country, and is one of its most important economic sectors.

But intensive farming still harms the environment to an alarming extent, according to a study conducted by the Federal Environment Agency (UBA). The use of pesticides and fertilisers as well as intensive animal husbandry, have a negative impact on humans and nature, the 40-page document indicates.

“Over the last 30 years, innovation and technical progress in most sectors has led to great successes in reducing the amount of substance that reaches the environment. But agriculture emissions show only marginal improvements,” the study’s authors write.

One of the most controversial issues concerns greenhouse gas emissions.

According to the researchers, the use of moors and clear-cutting for agriculture, as well as fertilisers, soil cultivation and animal husbandry produce a high level of emissions that impact the climate.

In 2012, agriculture-related emissions were around 70 million tonnes of CO2 equivalent – about 7.5% of the year’s total greenhouse gas emissions. This means that after industry, which made up 84%, agriculture was the second largest emitter in Germany.

Biodiversity is also threatened by intensive farming. Agriculture burdens the environment with nitrogen, phosphorus and heavy metals. Broad-spectrum pesticides not only wipe out parasites, but also kill other beneficial insects.

As a result, this has adverse effects on birds and other mammals, who lose their food resources. The unfortunate result is that instead of realising initial plans to stop and reverse the trend of species loss by 2010, more and more species are disappearing from the agrarian landscape.

Still, the country’s nitrogen surplus has been stagnating at a high level for years. At an average of 97 kg per hectare, it exceeds the German government’s target value within the sustainability strategy by almost 20 kg per hectare.

As a result, agriculture, with a share of 57%, is the nation’s largest source of nitrogen emissions into the environment.

While the European Commission is currently working on a directive to further reduce nitrogen emissions, Germany has not yet complied with the existing Nitrates Directive from 1991.

Recently, however, the German government announced that it intends to gradually cut the 97 kg per hectare nitrogen level to 50 kg per hectare, thanks, in part to pressure from the European Commission. This is also a target that UBA President Maria Krautzberger has pushed for on many occasions.

In early January, the German Advisory Council on the Environment (SRU) sounded alarm bells in a special report.

Reactive nitrogen emissions are much too high in Germany, the council said, and must be reduced by at least half.

To reach this goal, the government advisors called for strict measures. The reduced VAT rate on meat, eggs and milk products should be removed because it conceals the actual costs of large-scale livestock farming, the SRU explained.

In the future, pig farmers should be required to install exhaust cleaning systems in their stalls and farmers should have to pay a fine when they exceed the maximum fertilisation level permitted.

Meanwhile, the UBA study’s recommendations to counteract all of these problems were formulated more broadly.

On the one hand, conventional agriculture should be required to follow stricter rules, the authors argued. It must use nitrogen and phosphorus more efficiently, limit feed surpluses, restrict animal husbandry to specific surfaces, and more carefully distribute fertilisers, the council writes.

The study’s second recommendation is a transition to organic farming. This could provide “a considerable contribution to reducing emission of substances that pollute the environment”, it reads.

“The Agriculture Minister is an organic-farming-prevention minister because he abandons environmentally-friendly agriculture despite growing demand,” Hofreiter argued.

“Nitrate minister” Schmidt, the Green politician said, is not taking care of the groundwater quality and the health and financial costs of his “failed policy”.

The increase in nitrate water pollution is due to the use of intensive farming methods. This means greater use of chemical fertilisers and higher concentrations of livestock spread over smaller areas.

Equally, the decrease in water quality in the 1980s came about principally as a result of intensive livestock breeding (chickens and pigs) in already saturated areas, and intensive cultivation using chemical weed killers.

The directive 91/676/EEC, known simply as "Nitrates", is part of the Water Framework Directive. Its aim is to protect the water supply from pollution from agricultural nitrates.

There are many regulations concerning the monitoring of surface water and groundwater, the designation of vulnerable areas, the development of codes of agricultural best practice, the adoption of programmes of action and the evaluation of action that has been taken.