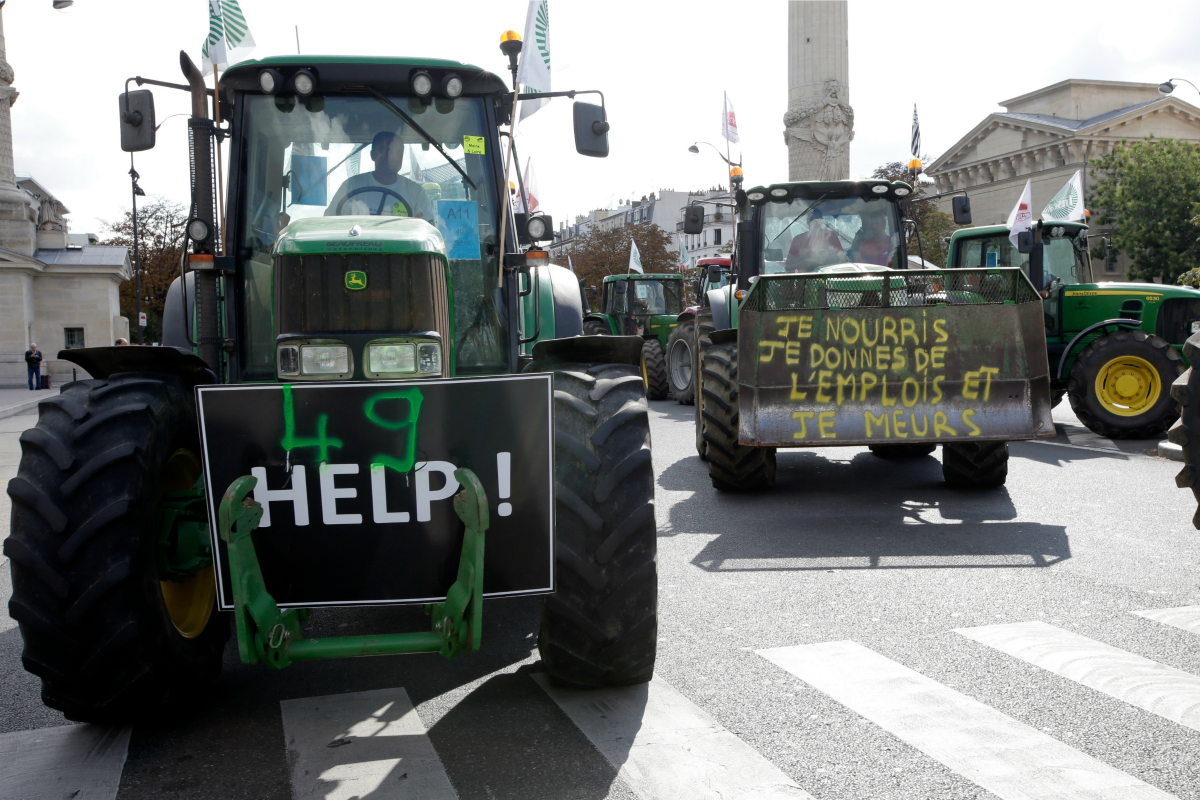 Angry French farmers blocked the streets of Paris with more than 1,500 tractors on Thursday (3 September) to protest against plunging food prices and soaring costs they say are killing their livelihoods.

From far-flung corners of the country, some spent days slowly chugging towards Paris, leaving behind barely surviving pig, cattle or beetroot farms to bring their plight to the capital.

The protest came after months of similar acts around the country and prompted the government to offer a fresh raft of measures to address the farmers’ concerns.

>> Read our LinksDossier: CAP: Still a work in progress

Bruno Jacquet, 50, and his two sons had left at 4:30am from the village of Artenay in central France where his family has farmed for seven generations.

He hopes he will not be the last.

His wheat, barley and beetroot farm has been hard hit by falling prices on the global market and China’s struggling economy.

“On top of that we have charges, taxes, environmental standards that are getting completely crazy,” he told AFP while making sandwiches on his tractor’s wheel-arch.

He said strict rules on when and how to plant, and the kind of fertiliser to use, came from “‘greenies’ who live in the city who can’t tell the difference between a rabbit and a chicken”.

Bruno’s son Yvertin, 21, would like to take over the farm, but there is not enough money for two salaries.

“I hope at least one of them can take it over one day. I hope they will be able to make a living,” Bruno said.

Polls show the protest has overwhelming support from the French public whose identity is closely tied to their soil, or “terroir”, and the high-quality products their land produces.

The Jacquets’ tractor joined hundreds of others lining the arteries in the east of the city.

“He who sows misery reaps anger” read one banner attached to a tractor.

However, traffic chaos was kept to a minimum as many Parisians had heeded advice to leave their cars at home and use public transport.

The farmers, many in tears, ended the protest and left in the late afternoon on tractors and buses to the blare of horns.

The protest is the culmination of months of anger that has seen farmers block key cities, dump manure and rotting vegetables in the streets and in one case send pigs running through supermarket aisles.

A combination of factors, including changing dietary habits, slowing Chinese demand and a Russian embargo on Western products in response to sanctions over the Ukraine conflict, has pushed down prices for beef, pork and milk.

Prime Minister Manuel Valls described the problem as a “European crisis”, with protests also expected in Brussels ahead of an EU meeting on the issue Monday (7 September).

In France local supermarkets and distributors have also been blamed for keeping prices low.

In July, the government unveiled an emergency package worth €600 million in tax relief and loan guarantees.

However farmers argued this was woefully inadequate.

After Thursday’s protest, Valls went further, adding €85 million to the emergency package, and promising a “break” in the environmental norms as well as a year-long moratorium on debt repayment for struggling farmers.

‘Agriculture is our heritage’

He also announced a reduction in social charges and promised to pour more resources into helping farmers modernise and raise investment.

“Agriculture is our heritage, the identity of our rural areas,” said Valls, speaking of the humiliation and self-sacrifice of farmers unable to make ends meet.

He spoke of those like cattle farmer Ribey Rotte, 49, from the Cantal region in central France, who told AFP he works 70 hours a week, never takes a holiday and draws a salary of 800 euros a month, well below the minimum wage.

“I am single, luckily. Someone with a family has no chance,” he said.

The agriculture minister has estimated that around 10% of farms in France – approximately 22,000 sites – are on the brink of bankruptcy with a combined debt of one billion euros.

“All we want is to make a living from our job,” said Yvertin Jacquet.

Xavier Beulin, head of France’s leading farmers’ union FNSEA said the government had finally “heard” the farmers, however some at the protest booed the announcement – especially those from Brittany where pork and milk industries have been hard-hit.

Russia banned the import of certain foods and drinks originating from the European Union, in response to Western sanctions over Ukraine’s crisis.