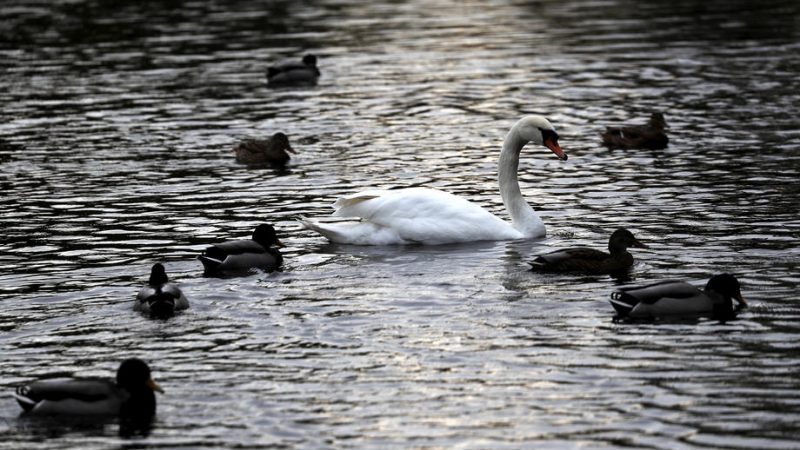 the city of Bruges has 'confined' the population of swans to avoid them catching the avian flu after the HPAI viruses have been detected among wild birds on the coast of Belgium. [EPA-EFE/KALNINS]

EFSA released an updated version of its avian flu’s overview on Friday (20 November), drafted together with the EU’s infectious disease agency (ECDC) and the European reference laboratory for avian influenza.

The study showed that outbreaks of avian influenza viruses have been reported in several EU countries within the past month. Cases were recorded in Belgium, Denmark, Germany, Ireland, the Netherlands and Sweden, as well as in the UK.

Avian influenza is a highly contagious viral disease which occurs primarily in poultry and wild water birds. There are two strains of the virus: high or low pathogenic viruses, known as HPAI and LPAI, respectively.

The highly pathogenic strain of avian flu has been diagnosed in 302 animals in Europe so far, almost three-quarters of them in the north of Germany only.

No human cases have been detected in the new outbreaks and the risk of transmission to the general public in Europe remains very low, the report reads.

Wild bird species were mostly reported to be affected, although 18 outbreaks in poultry and three in captive birds were also observed.

Following the incursion of the HPAI viruses into Europe, further spread within and among the member states is expected, also considering the mixing habits, and the long and short-distance migratory routes of wild birds.

Once introduced into a European country, there is a high risk that HPAI viruses can further spread in different directions due to shorter-distance movements of infected birds and multiple species of birds may be involved.

“Preventing further escalation of these outbreaks will require close cooperation between animal, public, environmental and occupational health authorities – in other words, a One Health approach – across Europe,” said Nik Kriz, Head of EFSA’s Animal and Plant Health Unit.

According to the EU’s agency, the risk of virus spread from wild birds to poultry remains high due to this expected increase of the virus circulation in the wild bird population.

EFSA recommends the member states continue surveillance of wild birds and poultry and to implement control measures to prevent human contact with infected or dead birds.

A number of EU countries have issued statements about the risk and have started putting preventative measures in place.

At the end of October, the detection of several cases of avian influenza in the Netherlands has set the EU on red alert for the possibility of spread elsewhere, leaving the country itself on ‘high alert’ and preparing a mass culling of animals.

In the UK, the avian influenza risk has been raised to medium by the department of environment and rural affairs (DEFRA), while Ireland and France have also sounded the alarm.

In Belgium, the city of Bruges has ‘confined’ the population of swans to avoid them catching the avian flu after the HPAI viruses have been detected among wild birds on the coast of Belgium.

The 2016-2017 HPAI epidemic was the largest recorded outbreak to date in the EU in terms of the number of poultry outbreaks, geographical spread and number of dead wild birds.