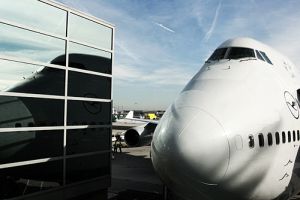 This article is part of our special report Greening aviation.

SPECIAL REPORT / Under pressure to cut carbon emissions, the aviation industry is urging policymakers to support the development of biofuels for aircraft in the same way they have done for road transport. EURACTIV reports from the Farnborough Airshow.

Biofuels were cleared for aviation use in June 2011 so long as they are blended with traditional jet fuel, and their use remains a novelty due to limited supply and high cost.

Industry officials are urging governments to help lift supplies, much as policies in the EU and United States have created a flourishing market in plant-based oils for cars and lorries. The industry contends that sustainable fuels – when combined with aerodynamic design, efficient engines and improved air traffic handling – will reduce emissions even as passenger traffic grows.

Tony Tyler, director-general of the International Air Transport Association, says the oil derived from plants could reduce the industry’s carbon footprint by up to 80% in the decades ahead.

“They have already powered more than 1,500 commercial flights,” he told the trade group’s recent annual meeting in Beijing. “But to increase utilisation, costs need to come down and the supply needs to increase. That will only happen with government policies to de-risk investment, including setting global standards.”

The Air Transport Action Group, or ATAG, reports that biofuels are expected to account for less than 1% of the industry’s fuel supplies this year, rising to 30% by 2030 and 50% a decade later. The Geneva-based industry organisation, which promotes environmental sustainability, has urged governments to support research, plant development and refining capacity to achieve those targets.

Others in the industry say government policies such as those in the European Union that support biofuels on the ground may be turned upside down.

Alan H. Epstein, vice president for technology and the environment at aircraft engine-maker Pratt & Whitney, says when it comes to curtailing emissions, it makes better sense to have more electric cars and lorries than vehicles burning plant oil.

“The fundamental point is airplanes don’t have an option,” Epstein told EURACTIV in an interview in Brussels.

“As Europe becomes greener for power generation, it makes more sense to think about electrification [for transportation],” he said. “In Europe, the automobile trips are shorter, the cars are smaller, so electrification may make even more sense than it does larger parts of North America.”

The industry is so convinced of the merits of biofuels that it used the recent sustainable development conference in Rio de Janeiro to stage a media event. Raymond Benjamin, who heads the International Civil Aviation Organisation, landed in the Brazilian city on 19 June after having flown from his base in Montréal on airliners using biofuels.

“I am proud to have been able to serve as a symbolic passenger on this 'Flightpath to a Sustainable Future',” Benjamin said, adding that bio-fuelled aircraft “are one of the many steps aviation is now taking in that direction.”

A not so soft landing

But not everyone agrees that Benjamin’s flight was sustainable or even a model for the future.

The United Nations Environment Programme warned in a recent report that even though burning plant-based fuels can produce significantly lower levels of carbon emissions, production and land clearing to make way for new crops “may reduce carbon-savings or even lead to an increase.”

Bill Hemmings, who monitors aviation policy in Brussels for the green NGO Transport and Environment, agrees.

Hemmings believes the aviation industry could be falling into the same trap as ground transportation in believing that biofuels are easy on the planet. Greenhouse gases emitted during production, he said, added to concerns over the impact of clearing land and tapping water and other resources needed to sustain fuel plants – especially in developing and emerging nations – may eventually make biofuels more pernicious than traditional fuels.

Such concerns about both direct and indirect impacts from plant cultivation have led Transport and Environment and other environmentalists to press the European Commission to rethink its mandate for 10% biofuel use in ground transport by 2020.

“This huge industry is being built, not on a house of cards, but without a solid foundation and that foundation will shift seismically if indirect land-use change is properly addressed,” Hemmings said in an interview. “So why go and build another aviation mountain which is going to have the foundation shaken once this is sorted out.”

He also disagrees with Tyler and others calling for more government support of biofuels in aviation, noting that the industry already gets big subsidies – such as tax exemptions for aviation fuels – that could fund development of alternatives fuels.

Magda Stoczkiewicz, director of Friends of the Earth Europe, is also wary of the aviation industry’s call for public support of biofuels when the full impact of production, refining and delivery has not been weighed.

“Our position is that for the moment, we don’t see how the big amounts of biofuels needed for aviation can be produced sustainably,” Stoczkiewicz told EURACTIV.

Still, aviation officials say they have to do something, both to meet passenger demand and reduce carbon emissions in an industry that accounts for the biggest growth in greenhouse gases. They say the price for that shift is high – today’s aviation biofuels cost as much as 10 times more than conventional fuels.

Despite the current economic situation, air traffic is expected to double or even triple by 2020 worldwide. The EU wants to cut both carbon dioxide emissions – through its controversial Emissions Trading System – as well as improvements in air traffic management. Globally, international airline associations, airports, navigation service providers and manufacturers have agreed to improve fuel efficiency by an average of 1.5% per year and halve emissions by 2050 from 2005 levels.

Concerns about energy supply and price vulnerability are other motivators – for instance, the 2011 revolution in Libya sent oil prices soaring despite weakened global demand. An EU-US-backed oil embargo on Iran also could disrupt supplies.

Airlines are already taking steps to cut weight and improve efficiency. Each generation of aircraft being produced by leading manufacturers like Airbus and Boeing are more aerodynamic, lighter and more durable. On the ground, efforts to cut taxi time and delays at the gate save fuel and reduce emissions.

Meanwhile, industry figures show that new engine technology that is just coming onto the market is 16% more efficient than those in use today.

But Hemmings says all this is expensive and by calling for more attention to aviation biofuels, the industry is buying time.

“Everyone is led to believe that there is a tonne of biofuels that will save the world just around the corner, and why go to all this dreadful trouble of [having] to do something else like emissions trading and produce more fuel-efficient aircraft,” he said.

“So a lot of it seems to be about that, and that gets up my nose, it’s fair enough to say.”

More efficient engines, aircraft and air traffic management can lower aviation fuel consumption and reduce carbon emissions, Randy Tinseth, Boeing's vice president for marketing, said in Brussels on 6 July. But over the long run, "We have to have biofuels to achieve reductions."

Following a pan-American flight using a streamlined air traffic management system and on board aircraft partly powered by biofuels, Airbus President Frabrice Brégier said: "To make this a day-to-day commercial reality, it requires now a political will to foster incentives to scale up the use of sustainable biofuels and accelerate modernisation of the air-traffic control management system. We need a clear endorsement by governments and all aviation stakeholders to venture beyond today's limitations."

Aircraft don’t fly on plant fuels alone: biofuels are currently blended with fossil fuels up to a maximum 50-50 mix.

Used vegetable oils are currently one source for planes and there are hopes that algae, jatropha and plant waste such as corn stalks can produce enough oil to gradually reduce fossil fuel demand.

If the 2040 goal is met, it would mean that 10% of the world’s aircraft fleet would be running on a mix of 10% biofuel and 90% traditional jet fuel, Air Transport Action Group (ATAG) figures show.

The industry has committed to sustainable production and is experimenting with a variety of plant sources that could produce abundant yields with – at least in theory - relatively low impact on the environment. Still, to replace today’s fossil fuel consumption in passenger aviation from jatropha would require a land area of  2.7 million square kilometres, or equivalent to four Frances, or for algae, 68,000 square km – slightly greater than land area of Lithuania.