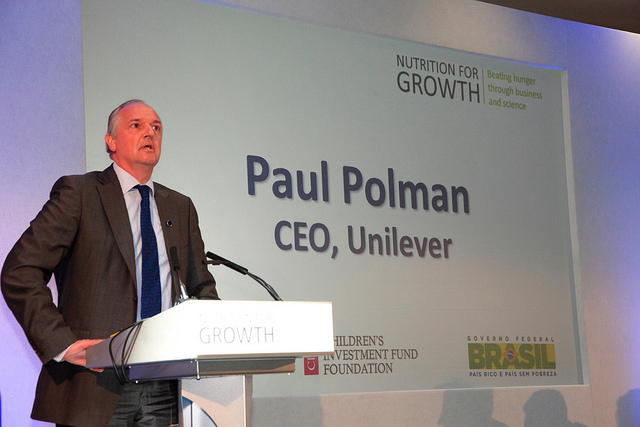 The ten largest food and beverage companies, if combined, would be the 25th most polluting country in the world, according to a report by Oxfam.

This is more than Finland, Sweden, Denmark and Norway combined, according to the Oxfam report, ‘Standing on the Sidelines’, published today (20 May).

These ten companies could be doing a lot more to improve their environmental footprint but some have made notable advances, Oxfam says.

Unilever, Coca-Cola and Nestlé were the three most assertive in their policies to tackle climate change. Kellogg and General Mills were the two worst performers.

“The Big 10 companies generate over $1 billion a day but are failing to use their power responsibly and we will all suffer the consequences. Kellogg and General Mills in particular are not doing their part. These companies should be leading the fight to help stop climate change from making people hungry,” said Natalia Olonso, the head of Oxfam’s EU office.

Storms, floods, drought and changing weather patterns caused by climate change have put pressure on food prices, by devastating crop yields, for example. Much climate change has been attributed to man-made causes, such as industrial and agricultural activities and transport.

The report shows that climate change has also affected the revenues of the companies themselves, with Unilever saying that it loses $415 million (€303 million) a year and General Mills reporting the loss of 62 days of production in the first fiscal quarter of 2014 due to extreme weather conditions.

The Oxfam report also shows that about half of the food companies’ total emissions come from the supply chains involved in the production of agricultural materials, which are not included in the reduction targets some of the companies have set.

“The Big 10 food and beverage companies should step off the sidelines and stand up to dirty energy companies holding back climate ambition,” Alonso said in a statement.

A spokesperson for the European Commission declined to comment on the measures it was taking to ensure the reliability of companies’ reporting obligations for greenhouse gas emissions.

Oxfam says that the ten largest food and drink companies should be able to reduce their emissions by some 80 million tonnes by 2020, the equivalent to taking all the cars in Los Angeles, Beijing, London and New York off the road.

The report is part of the international charity’s “Behind the Brands” campaign, which looks at the social and environmental polices of the Big 10.

In April, a number of Europe’s largest food and drink organisations, including Unilever and Nestlé, signed a declaration on making the EU’s food system more sustainable.

According to the European Commission, the food and drink sector accounts for 23% of global resource use, 18% of greenhouse gas emissions.

Approximately 1.3 billion tonnes, or one third, of food that is produced is never consumed. Food wastage therefore can be considered the third largest emitter of greenhouse gas emissions, after the United States and China, according to the UN Food and Agriculture Organization.

The European Commission is expected to release in June 2014 a series of measures addressing food wastage and resource efficiency.