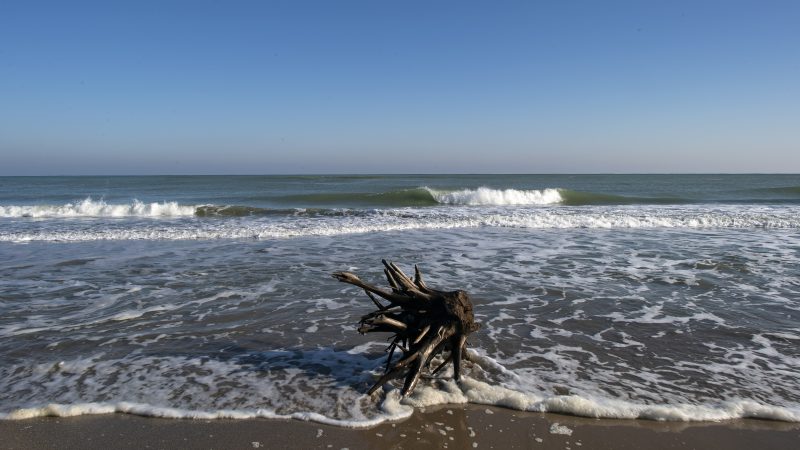 File photo. A root of a tree can be seen on the beach near the village of Ezerets, Bulgaria, 31 December 2019. [EPA-EFE/VASSIL DONEV]

Fish stocks in the Black Sea are dwindling and commercial fishing is causing more and more environmental damage, causing concern that has grabbed the attention of NGOs and EU lawmakers. EURACTIV Bulgaria reports.

Mackerel stocks are critically endangered in the Black Sea, and all sturgeon and herring species are threatened. Among mammals, the monk seal has disappeared and the common dolphin is among the vulnerable species.

This worrying picture has been described in the report “Bulgarian fisheries and aquaculture in the Black Sea – economic importance, environmental impact and natural factors influence” published by the World Wide Fund for Nature (WWF) in cooperation with the Bulgarian Academy of Sciences (BAN).

In the European Parliament, Bulgarian MEP Ivo Hristov, a member of the Progressive Alliance of Socialists and Democrats (S&D), also warned about the overfishing in the Black Sea. He stressed that all species except the sprat are at risk.

“The Black Sea is close to the so-called red line, behind which the process of ecosystem degradation could become irreversible,” warned Dr Radoslava Bekova from the Institute of Oceanology of the Bulgarian Academy of Science (BAN) and author of the study.

She added that industrial fishing has the greatest impact, as it directly destroys a significant proportion of the populations of certain species.

The data clearly shows that more than 50% of the seabed under 100 meters depth suffers from significant abrasion due to illegal harvesting of sea species.

When compared to the Mediterranean – which in the past has been considered by the UN as the world’s most over-fished body of water – the situation in the Black Sea looks even more concerning. Less than 10% of the plants and animal species living in the Mediterranean basin are present in Bulgaria.

The worrying trends are also highlighted in a 2015 European Commission report. At that time, Brussels officials noted that 74% of fish stocks in the Black Sea were either over-exploited, fully exploited or destroyed and only 17% recovered after they had been damaged. However, no concrete actions followed.

Fortunately, there is still hope that adequate measures can be taken. In mid-May, the European Parliament’s Committee on Fisheries (PECH) adopted a report by the Bulgarian MEP Hristov on “Challenges and opportunities for the Black Sea fisheries sector”.

In his report, the MEP highlights that stocks in the Black Sea are overfished and calls for urgent action to be taken to address the issue.

Alluding to the growing global demand for protein, the MEP advocated introducing additional incentives for aquaculture production. He mentioned that this measure would certainly reduce pressure on wild fish stocks.

According to the Executive Agency of Fisheries and Aquaculture (EAFA) of Bulgaria’s agriculture ministry, the total number of active fish farms in Bulgaria is 764, 730 of which are for freshwater aquaculture and only 34 for marine aquaculture.

Hristov also suggested incentives for small-scale fishermen to support their livelihoods and activities which do significantly less harm than industrial fishing.

“Small scale fishermen must be treated individually. Their livelihood is uncertain, and their income is lower than in other sectors. This makes them particularly vulnerable to unforeseen events or crises,” the Bulgarian MEP pointed out.

He also urges local fishing communities to consider introducing a designation of origin for Black Sea production as originating from an area of regional or local importance.

Turbot in the spotlight

Due to the limited stocks, Brussels has for years strictly controlled turbot catch in the Black Sea. Turbot is a delicacy fish, fetching the highest prices among the Black Sea species.

However, a drastic 32% increase in the catch limit was approved in 2019. This decision allowed Bulgaria and Romania to obtain a quota of 150 tonnes of turbot (75 tonnes each), for 2020, and eco-organisations vigorously opposed the increase.

The Commission explained that it increased the quota from 57 to 75 tonnes per country because the stocks of this species were already sustainable and, unlike three years ago, mature turbots are predominant and ready for breeding.

However, the Commission took note and, for 2021, Bulgaria and Romania received a quota of 75 tonnes, but fishermen will be able to catch this quantity not only in the Black Sea but also in the Mediterranean.

According to the Executive Agency of Fisheries and Aquaculture (EAFA), in Bulgaria, the total fish catch and other aquatic organisms from commercial fishing account for around 8,602 tonnes, of which 8,546 tonnes come from the Black Sea and 53.7 tonnes from the Danube.

One response to “Black Sea facing ecological disaster due to overfishing”