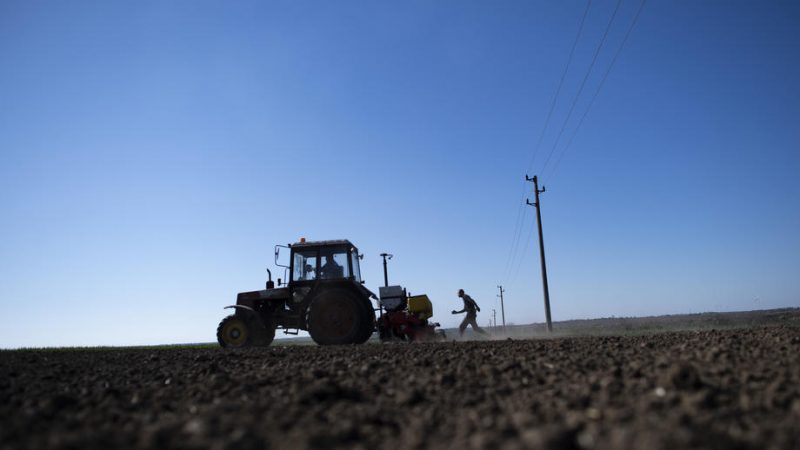 A farmer with his tractor sows sunflower seeds in a field near the town of Shabla, Bulgaria, 24 April 2020. [EPA-EFE/VASSIL DONEV]

The Bulgarian government will allocate a record €560 million budget to ensure the country’s food security in light of the war in Ukraine, but the country’s agriculture minister has warned this is still insufficient to support the ailing sector.

According to Bulgarian agriculture minister Ivan Ivanov, this unprecedented sum of money is designed to help the sector deal with the fallout of the war in Ukraine which has seen prices for feed, fertilisers and gas soar.

The minister specified that €40.33 million will be allocated for livestock farmers and bee colonies, with €32.93 million for fruit and vegetables, rice and roses. He added that the procedure will be eased and accelerated as much as possible so that farmers can receive the money quickly.

The aid, which represents the biggest change in the government’s agricultural policy in response to the conflict, will also go towards buying wheat and sunflower seeds at prices ranging from €285 per tonne without VAT for wheat and up to €710 per tonne for sunflower farm seeds.

Too little, too late

However, Bulgarian farmers who keep the largest areas sown with grain are not happy with the support.

Kostadin Kostadinov, chairman of the National Association of Grain Producers, pointed out that the grain producers in Bulgaria were supported neither by the Covid aid, nor by the 60/40 measure of the National Employment Agency.

Through these plans, EU countries set out how they intend to meet the nine EU-wide objectives of the reformed CAP. However, these were drawn up prior to the Ukraine war.

Speaking at the meeting of agriculture ministers at a meeting in Luxembourg on 7 April, the minister Ivanov said that measures taken by the European Commission to provide emergency support and relief to farmers are a good first step.

However, he conceded that the support package announced for the sector, together with the Commission’s temporary crisis framework for state aid, will not be enough in view of the threats to the sustainability of the whole food chain and the absolute unpredictability of developments.

In particular, he singled out Bulgaria’s heavy reliance on imports of raw and white sugar as a notable concern, pointing out that some alternative sources of sugar, including Moldova, are currently uncertain.

“In this market environment, the main direction to ensure sugar consumption in Bulgaria is the processing of raw cane sugar for refining. That is why Bulgaria would like to regulate preferential access to raw materials for refineries in sugar beet deficit member states,” the minister explained.

As such, he stressed that Bulgaria continues to push for a separate aid scheme with further flexibility, similar to the one the Commission set up to tackle the first wave of the COVID pandemic.

However, the minister assured on 16 April that Bulgaria is expected to have a good harvest of both autumn and spring crops. He specified that the data on the development of wheat, rapeseed, and other crops were good, with farmers taking care of their future production and no drastic increase in prices expected.

Despite prospects of a good harvest, Bulgaria has been proactive in embracing the derogations to CAP environmental measures exceptionally permitted by the European Commission, including the possibility to plant crops on fallow land.

According to its ministry, Bulgaria will make full use of all derogations open to them and encourage farmers to use all available capacity for food and feed production.

According to Kostadinov, roughly 5% of land in Bulgaria is left for ecological purposes.

According to him, about 2-3% of this area will be used for production, which will cover the deficit due to the war in Ukraine as it is accountable for 30% of the world’s production of grain.

This year, he said, farmers will sow more sunflower crops. However, the difference from last year will not exceed 10-15%.