CAP talks crash on the ‘floor’ amid interinstitutional blame game 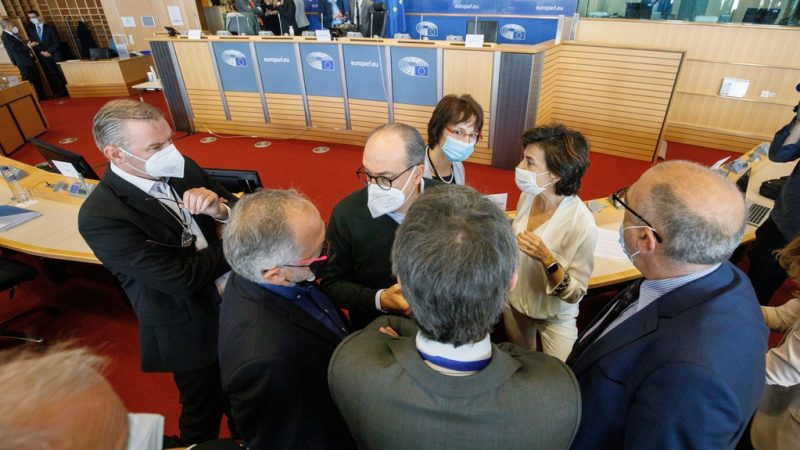 Negotiators from the European Parliament and the Council were expected to seal a deal on CAP reform in a final trilogue, originally scheduled for 25-26 May. The two sides opened what was meant to be the final stretch of talks over the future of the policy on Wednesday (26 May).

As the intense talks remained unfruitful, on Thursday evening, the rotating EU presidency held by Portugual came up with a compromise ‘package’ proposal in a bid to break the deadlock.

The package addressed almost all the outstanding issues, including the ring-fencing of the so-called eco-schemes – namely the percentage of direct payments budget that will be earmarked for environmentally-friendly agricultural practices.

In their respective mandates voted in October, the Council put forth a proposal for 20% of mandatory eco-schemes, while the Parliament upped the ambition to 30% and an overall budget figure of €58.7 billion.

In its last offer, the Portuguese minister Maria do Céu Antunes offered to meet the Parliament halfway by increasing up to 25% of the eco-scheme ring-fencing for the full duration of the programme, which was initially viewed positively by MEPs.

However, a detail in the Council’s proposal looked suspicious to the Parliament’s negotiator – a “floor” of 18% ring-fencing with full flexibility to transfer unused funds above the floor to other payments.

The Parliament’s negotiator perceived this floor as a provocation from ministers, as it would have even downgraded the initial Council position of 20% ring-fencing for eco-scheme

As tensions peaked, EU lawmakers torpedoed the Council’s offer by putting forward a counterproposal that increases the floor to 22% in 2023 and 23% in 2024. This was rejected by the Council and led to the failure of talks.

A common sentiment echoed across the board in the Parliament is that ministers should be taking the blame for the failure.

“The Council refuses to face the reality that this CAP must be transformational and needs to change course or no agreement will be possible. Either we take sustainability serious now or humanity pays the price forever,” leftist MEP Luke Ming Flanagan told EURACTIV after the talks.

Defending the Council’s position, the Portuguese minister told a press conference on Friday afternoon that “in every negotiation, each side has to make concessions, and that it’s what we did”.

Excessive demands on climate and environmental protection will make the reform impossible to implement, according to the German agriculture minister Julia Klöckner.

“This is not about a revolution, it is about a reform that takes everybody on board and ensures our food supply,” she added.

The summary of the Agrifish Council meeting reads: “Ultimately, although progress was made in several areas, a number of key issues remained outstanding. It was therefore decided to postpone talks until the next meeting of agriculture and fisheries ministers in June”.

Emphasising that she does not want to dwell on past mistakes, Maria do Céu Antunes said the negotiators “will continue to work in a highly committed fashion, and we will keep going”. She added she would start planning immediately to establish the goals for the next few days.

The minister already confirmed that next Monday (31 May), the European Parliament’s Agriculture Committee will sit down with the Commission services to enable negotiators “to get out of the starting blocks on this work straight away”. A number of other formal meetings will also be held.

“We have said we want to make our contribution to making sure that we get this reform under the Portuguese presidency,” she reiterated.

During the talks, Parliament criticised the Commission for not being impactful while the chair of Parliament’s agriculture committee, German MEP Norbert Lins, said he would look at an  expanded role of the Commission in brokering the negotiations

Wojciechowski also highlighted the challenges of communication during this COVID-19 pandemic.

“It’s not easy to communicate face to face intensely as everything’s happening virtually – nothing replaces direct contact. And that’s something I very much regret,” he said.