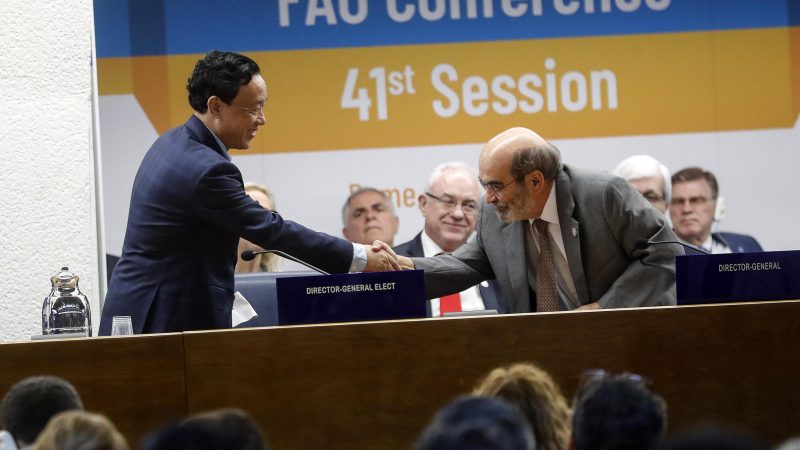 The hand-over of power from FAO Director General Jose Graziano da Silva (R) to the winning Chinese candidate Qu Dongyu (L), after the latter was being appointed as the new head of the United Nations' food agency. [EPA-EFE/ANTIMIANI]

Despite months of diplomatic efforts, Europe failed to get French candidate Catherine  Geslain-Lanéelle elected as the new chairperson of the United Nations’ Food and Agriculture Organisation (FAO).

The 41st session of the FAO Conference voted on Sunday (23 June) to appoint the highest governing body of the Rome-based UN agency.

China’s Qu Dongyu won the top job after the first round of voting among the 194 FAO member countries.

To his credit, Qu has a good track record. As China’s vice-minister for agriculture, he worked on several rural development projects all over the world and was in tight contact with many UN countries during that time.

He becomes the first Chinese national and the first person from a Communist country to hold the FAO director-general’s chair.

“I’m very grateful to my motherland. Without 40 years of successful reforms and open-door policy I would not have been where I am,” he said in his first speech.

“Now the election is over and I will be committed to the original aspiration, mandate and mission of the organisation,” he said, adding that he will uphold the principles of fairness, openness, justice and transparency, remaining impartial and neutral.

During his campaign, Qu was counselled by Jeffrey Sachs, a professor of economics at the Columbia University and world guru in sustainable development.

I'm honored to have been elected the ninth Director-General for Food and Agriculture Organization of the United Nations . Thanks member countries for electing me.#FAOElection#ZeroHunger @FAO pic.twitter.com/w4vPtjettD

Beijing was keen to win over the helm of the UN food agency.

According to a diplomatic source quoted by French newspaper Le Monde, there was “intense Chinese pressure” on other FAO ambassadors to get Qu elected. African candidate, Médi Moungui from Cameroon, abandoned the race after receiving a bribe of €62 million, the source claimed.

Although the ballot is secret, several media reported that Mercosur countries such as Uruguay, Brazil and Argentina had backed Qu’s bid. The Cuban delegation at the UN agency even made their backing public through the mission’s official Twitter account.

The diplomatic source quoted by Le Monde also said that China did not hesitate to exert economic and political influence over South American countries, threatening to block agricultural exports from Brazil and Uruguay if they did not vote for Qu.

Qu’s appointment is seen as part of a bigger plan by Beijing to penetrate relevant UN bodies in preparation for China’s massive ‘Belt and Road’ infrastructure initiative at multilateral level. 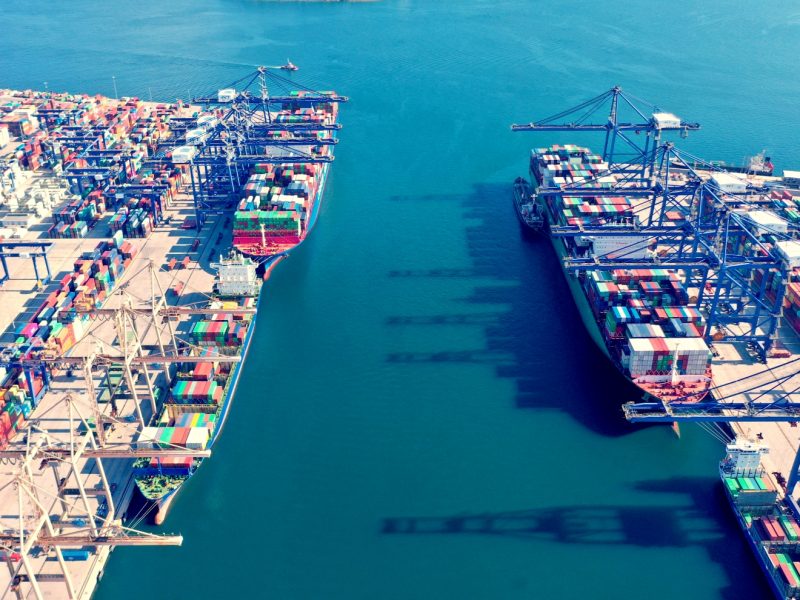 'Belt and Road': Linking up Europe and Asia

Six years after it launched its ‘Belt and Road’ initiative, China promises to improve the transparency and sustainability of its massive transport infrastructure programme as a way to dispel European concerns.

The EU endorsed French candidate Geslain-Lanéelle as the bloc’s sole candidate from the very first moment she threw her hat into the ring.

Although she was running as a French national, she told the press last January that the EU had shown support for her candidacy at all levels, including the administrative bodies of the European Commission, namely the European External Action Service (EEAS), the directorates for development cooperation (DEVCO), agriculture (AGRI), maritime affairs and fisheries (MARE), and health (SANTE).

EU Commissioners Phil Hogan, in charge of agriculture, and Neven Mimica (development policy) have also repeatedly made public appearances with her.

Considering the EU’s involvement in the campaign, Geslain-Lanéelle’s defeat can be seen as a wake-up call for Europe, which points to a rejection at global level of EU trade policies for agricultural goods.

After almost 20 years of talks with Mercosur countries, the EU is in the final stages of concluding a trade deal with South America., which includes a substantial agricultural chapter.

The EU’s international development policy was also ineffective at ensuring the FAO chair to Geslain-Lanéelle, although the bloc remains the world’s biggest development donour with €74.4 billion spent in 2018.

No European has held the FAO director-general position since Dutchman Addeke Hendrik Boerma, whose mandate lasted from 1968 to 1975. No woman has ever directed the UN Food Agency so far.