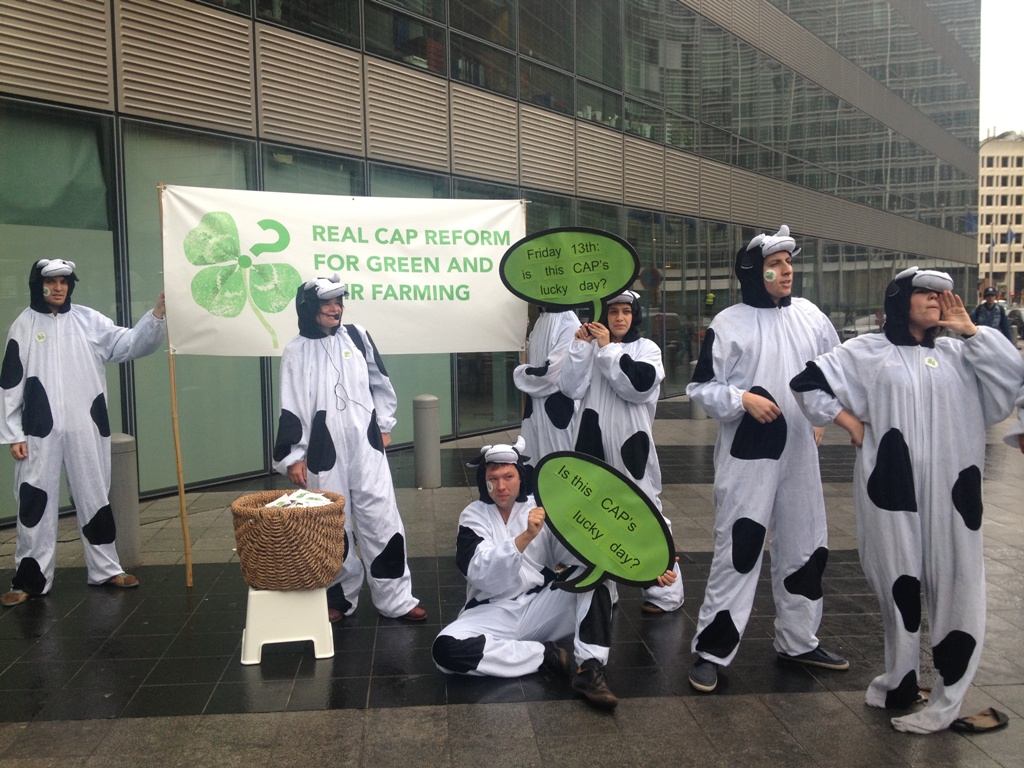 The conservationists appear to have support in the EU executive, where Ciolo? said his proposed reform of the Common Agricultural Policy (CAP) could have positive economic impact now as well as for the environment in the long term.

Farm and food ministers were discussing the future of CAP this week in their first meeting under the tutelage of Cyprus, which holds the rotating presidency of the EU Council.

“The CAP could be one of the keys to the economic recovery, leading to job creation and generating sustainable growth in many European regions,” Ciolo? told a conference, ‘The Cap Towards 2020 – taking stock with civil society’, hosted by the Commission on Friday (13 July).

The agriculture commissioner added that in 2011, the EU agriculture and agri-food sectors exported the equivalent in value of more than 1,000 Airbus aircraft, which range in price from €67 million for the smallest of the European manufacturers’ models to €389.9 million for A380 jumbo jet.

“Some member states have seen a renewed interest in agriculture during the crisis,” Ciolo? said at the conference that was arranged at a crucial stage in the process of agreeing a new CAP for 2014-2020.

The European Commission’s CAP proposals for beyond 2013 have called for expanding ecological areas in agriculture – including buffer strips, leaving land fallow and protecting natural water bodies.

In a setback for environmentalists, the Parliament and council of agricultural ministers have sought to weaken some of the “greening measures” outlined by Ciolo? in proposals released on 12 October 2011.

Farm ministers meeting on Monday expressed doubts about proposals to reserve 30% of direct payments to farmers as an incentive to practice more sustainable farming. Meanwhile, a report presented the same day to the Parliament’s agricultural committee raised concerns that the Commission’s proposals were too complex.

Though the CAP is not its final form and a budget for the EU’s largest programme has yet to be approved, pressure is growing to strip some of the environmental measures.

Before Ciolo?'s speech on Friday, protesters from environmental NGOs such as WWF, Slow Food, Pesticide Action Network and Bird Life International dressed as cows and chanted: “Vote for a green CAP reform.”

“What we really want to make sure is that this is a lucky Friday 13th for agricultural policy reform because at the moment, the way things are going, we are losing a lot of the environmental benefits that had previously been suggested and we really need them to be put forward,” WWF spokesman Philippe Carr told EURACTIV.

Carr added that the NGOs were looking out for the environment, but also for the European economy as there is a potential for creating  jobs from reforming the sector that previously had been overlooked.

“It’s a crucial time for the discussions now, and we are not happy with the way the discussions are going … The Council and the Parliament are trying to water down all the good elements of the CAP reform that the Commission has proposed,” said Faustine Defossez, agriculture and bioenergy policy officer at the European Environmental Bureau (EEB).

“The greening, the so-called good practice that farmers would need to do if they want to get EU money… The Council and the Parliament are trying to add lots of flexibility to this and make that extremely easy. At the end of the day, it will be an empty shell,” Defossez said.

The Commission presented a set of legal proposals designed to make the CAP sustainable and competitive.

Following an ongoing debate in the European Parliament and the Council, the approval of the different regulations and implementing acts is expected by the end of 2013, with a view to having the CAP reform in place on 1 January 2014.

Samuel Féret, member of the Agricultural and Rural Convention (ARC2020), said: “The European Commission must ensure its proposals are strengthened, not weakened. The priority should be rejuvenating farming and rural communities, while providing a decent livelihood for all farmers in a healthy environment – not business as usual.”

Speaking on behalf of the NGOs, Magda Stoczkiewicz, director of Friends of the Earth Europe, commented:

“The debate on food and farming in Europe needs a change of fortune. Policy makers must push for a radical reform of the Common Agricultural Policy. Member states and parliamentarians mustn’t be given the option to sidestep their responsibility towards European citizens, who want to see the green and fair farming that provides healthy food for consumers and truly protects the environment.”

The Commission’s objective is to have a flexible system together with common foundations, which will enable the EU to move forward in the same political direction and to avoid distortion of competition and discrimination.

“What we are talking about, ultimately, is getting the balance right between supporting the modernization of European agriculture and respecting local traditions without any preconceived ideas in terms of a single model,” Agriculture Commissioner Dacian Ciolo? said in a speech on 13 July.

Sofoclis Aletraris, Cyprus’ Minister for Agriculture, Natural Resources and Environment, also stressed in his speech the importance of listening to the many voices during what he mentioned could be the widest reform process the cap has ever seen.

“The stakes are very high and in situations like this, and it’s important to listen carefully to stakeholders, and to consult the civil society in general,” Aletraris said.