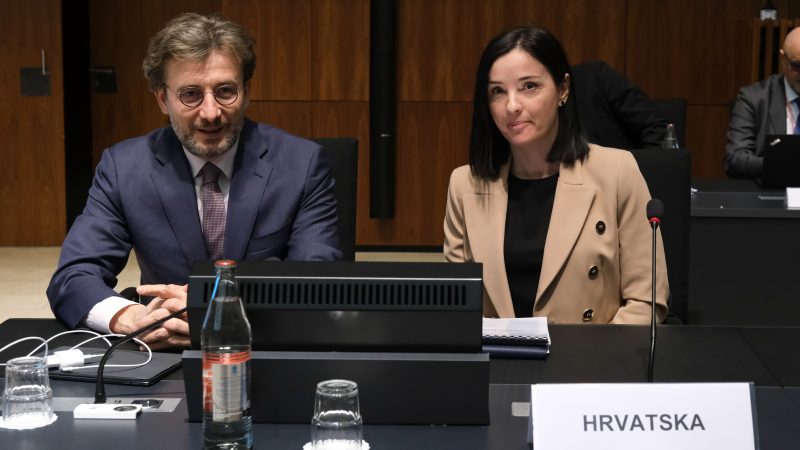 Croatia's agriculture minister Marija Vučković presented the request for more flexibility on behalf of a coalition of 13 member states at the EU Agrifish Council on Thursday (7 April). [EU Council]

The EU executive is open to looking in detail into member states’ call for more flexibility in the rural development spending to help European farmers hit by the Ukraine war, which has put further pressure on the agriculture sector.

The request was put forward in a paper undersigned by a coalition of member states led by the Croatian delegation and presented at the meeting of the EU-27 agriculture ministers in Luxembourg on Thursday (7 April).

The total allocation for the main EU farming subsidies programme is divided between two funds (often referred to as the “two pillars” of the CAP), the first mostly dealing with direct payments to farmers and the second supporting rural development.

The group asked to make use of available funds under their existing rural development programmes for the years 2021-2022 in order to support farmers and SMEs particularly affected by the crisis.

At that time, the Commission proposed a system of reallocation of funds in the national rural development programmes to finance relevant actions to face the crisis.

If this new request for flexibility will go through, member states will be able once again to re-direct additional support to farmers and small and medium-sized enterprises particularly affected by the current situation using rural development funds.

According to the proponents, the Russian invasion of Ukraine added further pressure to the already sensitive agricultural markets, with direct consequences on European farmers.

In particular, an increasing number of CAP beneficiaries are already withdrawing from the planned investment projects under the second pillar, as they have to face a ‘dramatic increase’ of input costs – energy, fertilisers and feed.

The member states supporting the temporary amendment also asked that the maximum amount of individual support “should be set as high as possible, providing that the overall support under this measure does not exceed 5% of the total EAFARD (European Agricultural Fund for Rural Development) contribution to the rural development programme (2021-2022).”

At the same time, the proponents pointed out they do not intend to set a precedent nor question the logic and principles of the EAFRD.

“However, the magnitude of the ongoing crisis calls for the utmost flexibility today to ensure that every possible means of support is urgently provided to the sector,” the paper presented at the Agrifish Council said.

The Commission expressed its willingness to consider the proposal.

“In terms of budget, finance and legal constraints, I have declared that we stand ready to perform this analysis,” the EU’s Agriculture Commissioner Janusz Wojciechowski told reporters at a press conference after the Agrifish Council.

However, he cautioned that this readiness to look into the request should not be taken as preemption of such action. “We will look to see if this is possible, feasible and justifiable,” the Commissioner said.

Member states also called on the European Commission to explore any further possibilities for additional flexibilities under the current framework of rural development.