In a recent interview, Commission vice-president Frans Timmermans said that Council and the Parliament are sticking to an agricultural policy that is not sustainable and that cannot continue like this. [EC]

On Tuesday (10 November), the negotiators of the European Parliament and the Council kicked off negotiations on the reform of the EU’s Common Agricultural Policy (CAP), which is supposed to start in 2023.

As the holder of the competence to initiate legislation, the Commission plays the role of a facilitator during these interinstitutional negotiations known as ‘trilogue’ in the EU jargon.

Since the final decision rests with the two co-legislators, the EU executive can use the threat of withdrawing its initial proposal as a last resort to influence the talks.

In an interview with Dutch TV RTL Nieuws, the Commission’s executive Vice-President Frans Timmermans hinted at this possibility, in case the final agreement is not in line with the objectives of the EU’s flagship environmental policy, the European Green Deal.

However, in a letter to the Greens seen by EURACTIV, Commission President Ursula von der Leyen said that she is not considering a withdrawal. 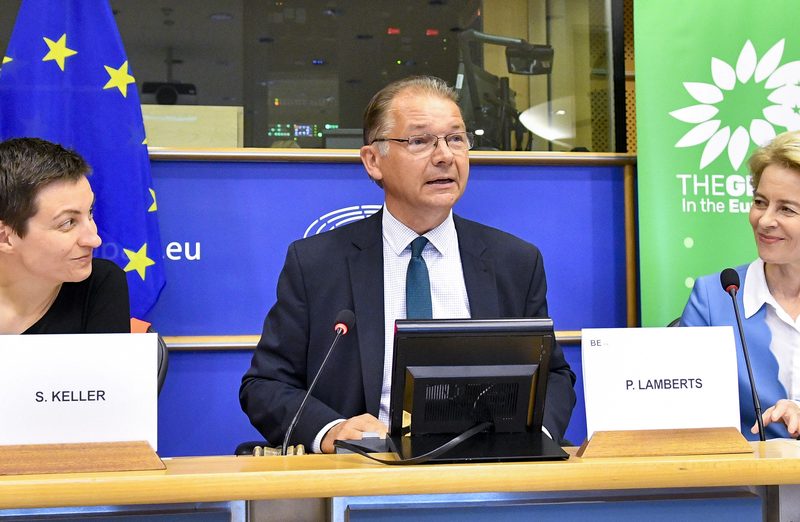 Asked to clarify the Commission’s stance about a possible withdrawal, a spokesperson explained that the EU executive is determined to make the CAP more ambitious in terms of climate environmental objectives and that it has to be aligned with the Green Deal objectives.

“In the interview, Timmermans referred to the possibility to withdraw the proposal but it doesn’t mean at this stage that we are there,” the spokesperson said.

The spokesperson recalled that the Green deal was introduced after the CAP proposal was made, and added that the Commission did not withdraw it because they believe it has the potential to deliver on the Green Deal objectives.

In another interview, with German TV Tagessschau, Timmermans said he was very disappointed at the negotiating mandates of both Council and Parliament.

“They are sticking to an agricultural policy that is not sustainable and that cannot continue like this,” he said.

In her reply to the Greens, von der Leyen said that certain aspects of both positions indeed appear to her, at this stage, unable to forge a final CAP that could produce positive results and deliver on the Green Deal objectives.

The news that the Commission leaves a door open for a withdrawal of the CAP was hailed by environmental NGOs, which had previously urged the EU executive to quash the original CAP proposal and safeguard the Green Deal.

Contacted by EURACTIV, veteran socialist MEP Paolo De Castro said the announcement did not come as a surprise to him.

“All three institutions are currently developing their negotiating strategy for the upcoming rounds,” he added.

He also said he was confident the Commission would provide the two co-legislators with the appropriate support to achieve an ambitious agreement on the CAP that will be able to protect a fair balance between production, consumer health and environment.

Italian MEP Eleonora Evi said in a note that “the words of Timmermans are further confirmation of how much this agricultural policy is at odds with the Green Deal, favouring a model of industrial agriculture”.