Under the new laws, fair working conditions and monitoring are to be strengthened especially in meat plants. [EPA-EFE| Tönnies Handout]

Two new laws are to put an end to exploitation and poor working conditions in the German meat industry. But critics are concerned that these laws don’t go far enough. EURACTIV Germany reports.

It’s been a difficult start for the German government’s attempts to eliminate abuses in parts of the food industry.

The new regulation passed by the federal cabinet on Wednesday (29 July) to optimise food inspections, which is designed to ensure more monitoring in high-risk businesses, has been strongly criticised by consumer organisations.

Meanwhile, the health and safety at work law, which Labour Minister Hubertus Heil (SPD) also presented to the cabinet on Wednesday, is in danger of being taken ad absurdum.

The new law is intended to eliminate the exploitative working conditions in the meat industry, which contributed to hundreds of employees in German meat factories being infected with COVID-19.

Heil’s law proposes a ban on work contracts in companies in the meat industry as of January 2021 and for temporary work as of April 2021 with the exception of companies with fewer than 50 employees.

As it became known on Wednesday, Germany’s largest meat company Tönnies, whose factory was the site of a massive outbreak in late June, had reportedly tried to circumvent the looming change in the law by founding 15 subsidiaries with less than 50 employees.

In addition, there are regulations for new standards for the accommodation of employees. “Nobody should have to live in mouldy or overcrowded rooms,” Heil said. 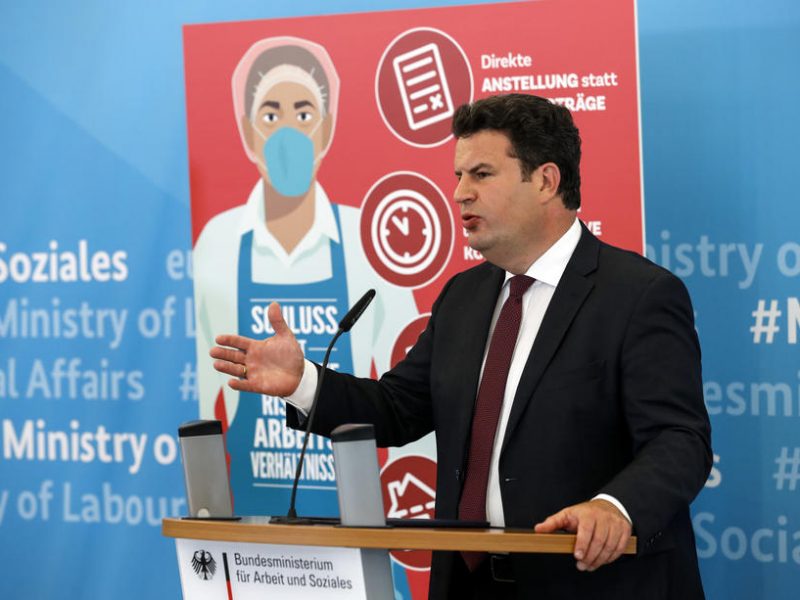 The German meat industry has been under fire for years over its low working standards and workers rights. The coronavirus clusters in slaughterhouses have now offered the government an opportunity to intervene. EURACTIV Germany reports.

With 9,333 of its more than 16,000 employees employed under these types of contracts, the fact that Tönnies apparently wanted to circumvent the new law with the help of the new subsidiaries was met with widespread public criticism.

“Tönnies should not play with fire,” SPD leader Saskia Esken wrote on Twitter, while left-wing member of parliament Niema Movassat also announced that this was a “disgusting move.”

This stance was echoed by the Working Group for Rural Agriculture (AbL).

The future of the meat industry, upon which many farmers depend, may not be left to companies like Tönnies, she added.

On Thursday (30 July), the Labour Ministry dispelled the notion that Tönnies could circumvent the new law in this way as the exception for companies with less than 50 employees only applies to craft businesses, meaning the meat company would still have to hire its workers.

Tönnies also promised that all employees in the core areas would be hired.

“We are already in the middle of this process, as we want to have the first thousand former contract workers permanently employed by mid-September,” a company spokesperson told ARD-faktenfinder.

The reason given for the 15 new subsidiaries was that these companies would enable Tönnies to implement direct hiring at its various locations more quickly.

Nevertheless, all subsidiaries are registered in the city of Rheda-Wiedenbrück, the location of the company’s headquarters.

Just as controversial is the new law on the monitoring of food companies, which was also passed on Wednesday and was in turn drafted by Agriculture Minister Julia Klöckner (CDU).

It provides for future operational inspections to be carried out on the basis of their risk class, rather than regularly.

The current practice shows that the existing risk classification of food companies leads to “clean” companies being inspected just as often as conspicuous ones, the Ministry writes.

“That is why we want to increase the monitoring pressure in problem companies by means of additional controls,” said Klöckner. 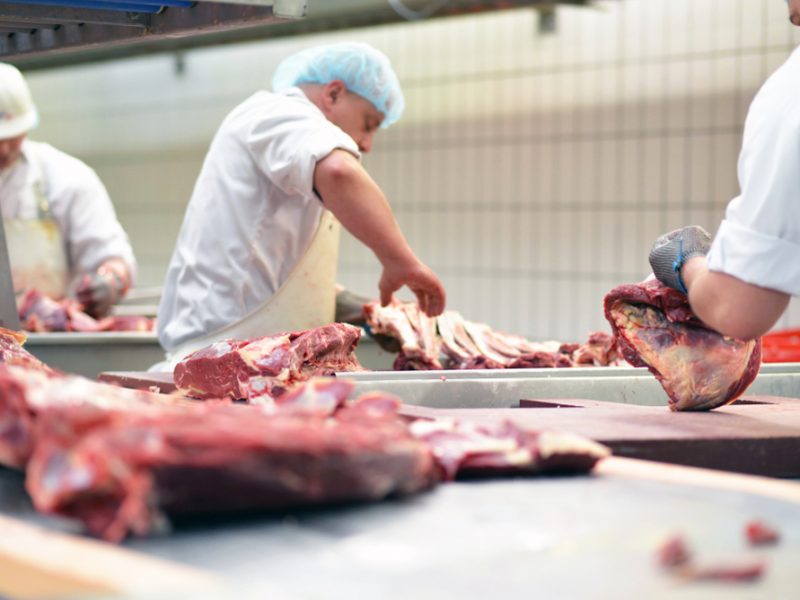 Another major COVID-19 outbreak in the largest meat processing facility in Europe has prompted stakeholders to urge the EU Commission to take swift measures to protect workers  in the sector and stem the spread of the virus.

The underlying problem is the lack of inspectors in the competent authorities of the states.

According to the consumer organisation foodwatch, about one in three mandatory inspections in food companies are currently cancelled due to lack of staff. Nationwide in 2018, more than a quarter of a million of the mandatory official inspection visits were not carried out, the organisation states.

Regarding the new draft law, Klöckner said “in meat companies that are assigned to the highest risk category, only weekly inspections instead of daily ones are to be carried out in the future. And other food companies, which previously had to be inspected monthly, will in the future only be subject to mandatory quarterly inspections.”

This has raised concerns that this could pave the way for the next food scandal.

Praise, however, came from Gero Hocker, the agricultural policy spokesman for the FDP in the Bundestag, who said that “with the current capacities, it is expressly correct to focus more on black sheep than to get bogged down in routine controls.”