Large farms manage two thirds of the agricultural land of the country and hold 76% of livestock. [Shutterstock]

The European Commission’s proposal to cap agricultural payments and provide more support for small farms has divided farmers in the Czech Republic. But there are other issues they should focus on, such as the ageing rural population and the challenges of modern technologies. EURACTIV.cz reports.

The positions of the two main camps – large businesses and small farms – on the post-2020 CAP are far apart. Whereas large farms want to keep their subsidies at the current level, small farms see capping as a chance to save their business and also the rural areas.

The debate on capping the farm payments has taken centre stage across Europe, especially in light of the European Commission’s proposal of the 2020-2027 Multiannual Financial Framework.

In a document published on 2 May, the mandatory capping is mentioned as a possible way to redirect EU funds from large enterprises to smaller farms.

The Commission also wants a “more balanced distribution of payments” through compulsory capping at the farm level or degressive payments decreasing with farm size. The payments for each farmer will be capped at €60,000 while the savings will be redistributed to smaller farmers.

“This means support will be redistributed towards medium-sized and smaller farms,” the Commission noted.

The EU executive is due to present its exact proposal for the next CAP on 1 June, sources told EURACTIV.com. 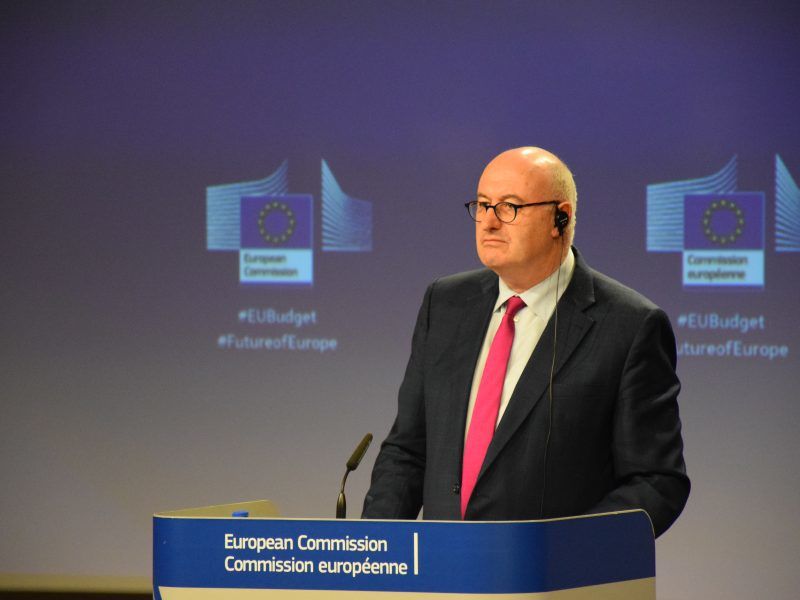 According to the Agricultural Association of the Czech Republic, such a strict cap is unacceptable.

At a workshop organised by EURACTIV Czech, Martin Pýcha, chairman of the Agricultural Association, commented, “The Commission says we have to support small farms, but it does not say how the big farms are involved in food production.”

Large farms are significantly present in the Czech agriculture. Data from the Czech Statistical Office show that they manage two-thirds of the agricultural land of the country and hold 76% of livestock.

Together with Slovak, Bulgarian and British farms, they differ significantly from the EU average.

“If the €60,000 cap is set for a company, it will affect all livestock production in the Czech Republic,” Pýcha warned, adding that the capping would have a negative impact on 1,800 Czech farms.

The redistribution principle, meaning higher subsidy rate for the first hectares of the farms, seems to be an acceptable compromise for large companies. This system has been already introduced by some member states and could even be mandatory in the future.

Private farmer Vaclav Koutný is convinced that the Czech Republic will be obliged to accept the redistribution system soon. At the same time, he called on his colleagues to prepare for the changes coming after 2020.

“The question is how agriculture should work in the future according to the EU, if it should still be based on the principle of subsidies,” Koutný emphasised. He explained that subsidies have largely shaped the way the farmers work today.

“For subsidies, to get that money, we’ll do whatever we can. Even things that we, the farmers, would never do,” he added.

MEP: Don’t focus only on subsidies

Farm subsidies are three times higher than when the Czech Republic joined the EU 14 years ago and the amount is still increasing, said Tomáš Doucha, an expert from the Czech Academy of Agricultural Sciences.

“We have three times more subsidies than we had in 2004. But the incredible growth in subsidies has its consequences: we also have three to five times more expensive land,” he said. However, the subsidies do not really go to those who manage the land, several stakeholders pointed out.

Pavel Telička, a liberal MEP (ALDE) and vice-president of the European Parliament, attempted to convince all the farmers to overcome the contradictions and decide what they really want from the EU.

“We did not learn from the past. We are way ahead of 2004, but we are still polarised,” the MEP said.

Telička noted that the Czech farmers should primarily agree on their priorities, focusing on the sectors they are competitive in and the projects that “make sense” for EU funding.

For him, apart from the subsidies level, other important issues should also be examined such as soil drying, ageing of the agricultural generation or decline of rural areas as well as the challenge of modern technologies.

“Let’s decide what the key strategic issues are and set ten priorities that we agree on. Only then will we be able to do promote our interests,” Telička concluded.