Plaintiffs urged the EU to conduct an inquiry into the validity of the science before renewing glyphosate's licence. [Paola Tamma/Euractiv]

On 4 October, two plaintiffs and their lawyers in an ongoing US lawsuit against Monsanto came to Brussels to lobby against the renewal of glyphosate’s licence in Europe – a weed killer that has been described as potentially carcinogenic by IARC, the UN’s cancer research agency, but deemed safe by the European Food Safety Authority (EFSA) and European Chemicals Agency (ECHA).

“The reason I am here today is to warn the EU Commission and you people of Europe to look at new studies that have been disclosed, not only by IARC, and at documents that have been declassified, showing that glyphosate is a probable carcinogen,” said John Barton, who was diagnosed with stage 3 non-Hodgkin lymphoma and claims it is due to using glyphosate-based herbicide Roundup for more than 30 years.

Their lawsuit against Monsanto was instrumental in making public hundreds of internal company documents that became known as the “Monsanto papers”.

The documents suggest that Monsanto “ghost-wrote” academic articles and even pressured editors of scientific journals to retract articles that countered their interests.

Three review studies that appear to be ghost-written were considered in the EU agencies’ risk assessment of glyphosate. Lawyers argued this could have implications for the scientific validity of their assessments.

But EFSA and ECHA downplayed the revelations, arguing the review papers had little weight in their assessment and they “came to their independent conclusion based on the original data and not on someone else’s interpretation”.

Therefore, they declared in June, “even if the allegations were confirmed that these review papers were ghost-written, there would be no impact on the overall EU assessment and conclusions on glyphosate”.

The documents suggest Monsanto has been aware for decades of the carcinogenic risks of glyphosate and its commercial formulation, Roundup, and suppressed the evidence.

In one study commissioned by the company in 1999, Dr. James Parry informed Monsanto that glyphosate is genotoxic (capable of disrupting a cell’s DNA and causing mutations), and recommended that Monsanto study the effects of glyphosate’s “formulations” – that is, Roundup.

Parry’s study was never made public, and his recommendations ignored: “We simply aren’t going to do the studies that Parry suggests,” Monsanto toxicologist William Heydens wrote in 1999.

In the commercial product, chemicals known as “surfactants” enhance the penetration of glyphosate within the plant – and are shown to have higher genotoxic profiles.

“[Monsanto] cannot say that Roundup does not cause cancer. We have not done the carcinogenicity studies with Roundup” – Donna Farmer, a Monsanto Toxicologist, is quoted saying in 2002.

However, under the EU’s pesticide regulation EFSA and ECHA only consider the single active substance and not pesticide formulations, a task that is left to member states.

France and the Netherlands already banned Roundup in 2015, but glyphosate is present in many generic products on the market.

This may partly explain the difference in IARC and EFSA’s assessments of glyphosate, according to EFSA:

“There are good scientific reasons for assessing the individual chemical (e.g. glyphosate) separately from the other chemicals in the pesticide formulation. For instance, if you assess all chemicals together, it is very difficult to identify which chemicals are causing which effects. Some pesticide formulations may contain dozens of different chemicals,” a spokesperson for EFSA told EURACTIV.com.

“This distinction between active substance and pesticide formulations also explains differences in the ‘weight’ or relevance EFSA and IARC attach to certain studies. For the EU assessment, studies conducted with glyphosate were obviously more relevant than studies conducted with formulated products containing other chemicals, particularly when the other chemicals could not be identified.”

When in 2015, following a request by the Commission, EFSA carried out an assessment of the surfactant POE-tallowamine, it found it is more toxic than glyphosate, and recommended that the toxicity of formulations and their genotoxic potential should be further considered and addressed.

A recommendation which led to a EU ban on the two chemicals being used together. 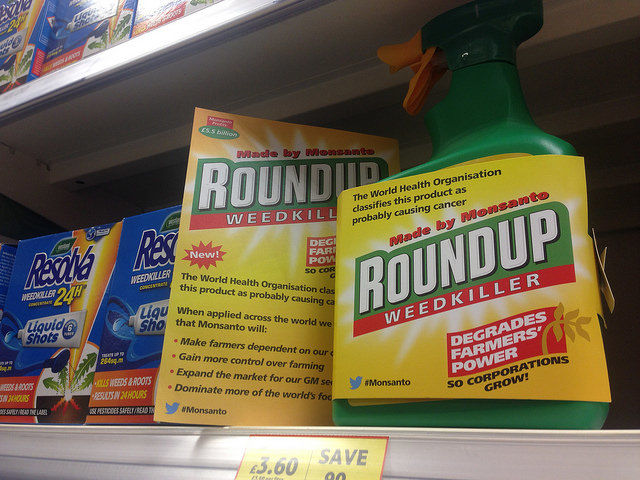 Italy urged to follow through with ban on glyphosate co-formulant

NGOs are warning Italy that it should not extend a grace period, and ensure that pesticides containing glyphosate do not contain the toxic co-formulant POE-tallowamine.

Lawyer Michael Baum argued that EFSA and ECHA have been disregarding certain studies: “It’s like having a finely made Swiss watch. All the gears match nicely and tell the time, but they wilfully sawed off some of the teeth,” he told reporters.

“EFSA and ECHA wilfully sawed off some studies. By cutting out studies and levels of exposure you end up carving and counting data that gives you the outcome they wanted, which is that glyphosate is not carcinogenic.”

“If you count data correctly, you end up finding an increased risk. This is why an inquiry needs to be done.”

EFSA and ECHA confirmed that they do not consider a re-assessment necessary at this stage. However, an EFSA spokesperson said: “The option to revisit our work is always open should relevant information come to light. This is true both with regards to new scientific evidence and with regards to information about the process for the assessment.”

The Monsanto papers include text messages showing close links between Monsanto and the US Environmental Protection Agency (EPA), in which EPA employees claim they “should get a medal” if they can “kill” a review into glyphosate.

“This is deeply disturbing in the US, for these are the people that are supposed to be protecting us. It should be disturbing in the EU as well because we don’t know what the relations are between Monsanto and the regulators in the EU,” lawyer Brent Wisner told reporters.

The law-firm made some documents available to the public and is looking to release more. “This is the tip of a very large iceberg,” Wisner added.

The media is now looking into connections between EU regulators and the firm. An article by the Guardian showed how large portions of EFSA’s own 2015 assessment were copy-pasted from Monsanto’s own study.

More recently, Le Monde found that one Monsanto scientist who killed a study which would have not conformed with European toxicity tests now works at ECHA.

The agency said these facts date back more than 15 years and the scientist in question did not, to its knowledge, participate in the risk assessment of glyphosate.

The licence for glyphosate is due to expire this year and EU member states will most probably vote at a meeting in November, after debate on 5 and 6 October failed to reach a conclusion.

EU Commissioner for Food Safety and Health Vytenis Andriukaitis announced there will be no re-authorisation without a qualified majority of member states.

France has already said that it will vote against the renewal, and on 3 October Italy’s Agriculture Minister Maurizio Martina said in a tweet that Italy will oppose the renewal.