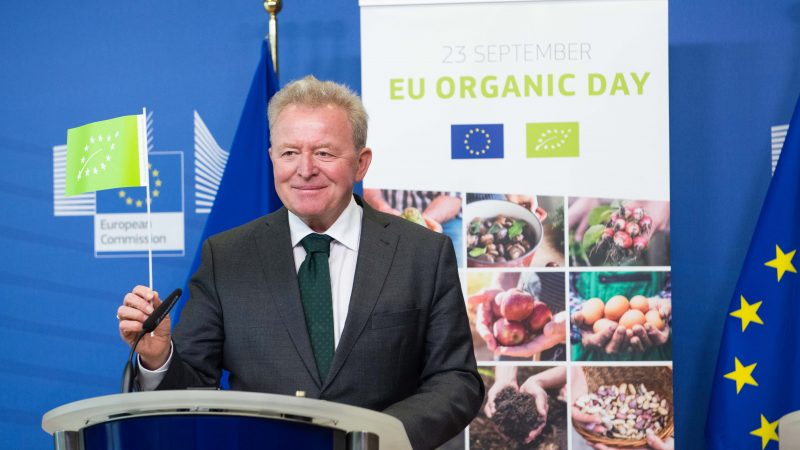 At the signing and launch ceremony, the Commissioner described organic farming as a “sustainable type of agriculture where food production is done in harmony with nature, biodiversity and animal welfare”. [European Union 2021]

The European Parliament, the Council and the Commission came together on Thursday (23 September) to celebrate the launch of an annual ‘EU Organic Day’, designed to promote organic agriculture to bolster its production and consumption in the EU.

According to Agriculture Commissioner Janusz Wojciechowski, the annual organic day is designed to raise awareness of organic production and promote the “key role it plays in the transition to sustainable food systems.”

At the signing and launch ceremony, the Commissioner described organic farming as a “sustainable type of agriculture where food production is done in harmony with nature, biodiversity and animal welfare”.

The Commissioner also pointed out that 23 September was specifically chosen as it’s also the autumn equinox, when day and night are equally long, something he described as a “symbol of balance between agriculture and environment that ideally suits organic production”.

Organic agriculture is a key focus of the Commission. Under the EU’s flagship food policy, the Farm to Fork strategy aims to triple the amount of land farmed organically in the EU to 25% by 2030.

In a Commission statement accompanying the day’s launch, the EU executive outlined that organic production comes with many important benefits.

These included that organic fields have around 30% more biodiversity, organically farmed animals enjoy a higher degree of animal welfare, take less antibiotics, and organic farmers have higher incomes and are more resilient.

This new EU Organic Day follows on from the publication of an action plan for developing organic production, adopted by the Commission back in March.

Structured around a three-pronged attack – boosting consumption, increasing production, and further improving the sector’s sustainability – the plan proposes actions designed to substantially boost the production and consumption of organic products in the EU.

Welcoming the creation of the new organic day, Jan Plagge, president of EU organics association IFOAM, called the day an “ideal opportunity” to take stock of where Europe is at in reaching its organic goals.

However, the organic movement’s President added some cautionary notes on implementing the action plan, pointing out that member states’ national CAP strategic plans will be the main engine for delivering on the EU’s organic objectives.

The national plans, whose drafts are due for submission to the Commission for approval by the end of the year, are the key instrument through which EU countries will set out how they intend to meet the nine EU-wide objectives.

As such, the organics association took the opportunity to call on member states to make the “best use of the possibilities offered by the new CAP to support the development of their national organic sector”.

“It is time to properly reward organic farmers, and conventional farmers transitioning to organic, for the benefits they deliver to nature and society, and to properly fund farm advisory systems geared towards organic and other agroecological practices,” he said.

Asked by EURACTIV how the Commission plans to encourage member states to place organic front and centre of their national CAP plans, the Commissioner said that he was confident EU countries would capitalise on the opportunities available to them.

“We will assess how ambitious they are and how they demonstrate to increase organic farming,” he said.

However, he acknowledged that it might be challenging in certain member states.

“There may be difficult dialogue with the member states which have a very small contribution of organic farming,” he said, highlighting that there are certain EU countries in which only 3-4% of agricultural land is farmed under organic farming.

“But it will be a question of dialogue with member states,” he said.