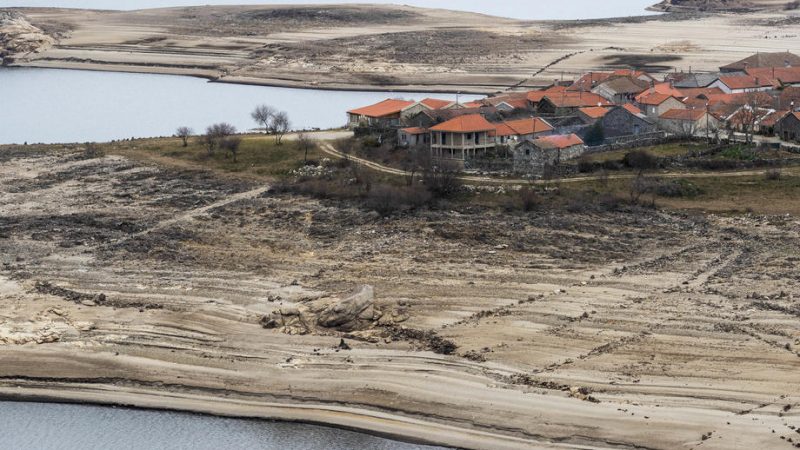 Both Spain and Portugal have been faced with severe water shortages for multiple weeks, with 45% of the Portuguese mainland being affected according to the country’s national statistics institute (INE). [JOSE COELHO/EPA-EFE]

As Spain and Portugal are hit by the worst drought in 15 years, MEPs have voiced worries over the situation. EU Equality Commissioner Helena Dalli raised hopes that support could come from funds in the EU’s farming subsidies programme.

“I am concerned about the serious drought situation suffered on the Iberian Peninsula,” Dalli said during the European Parliament plenary session on Thursday (17 February).

Both Spain and Portugal have been faced with severe water shortages for multiple weeks, with 45% of the Portuguese mainland being affected according to the country’s national statistics institute (INE).

“The drought in Portugal and Spain is of extreme severity,” conservative Portuguese lawmaker Álvaro Amaro stressed during the session. “Farmers are desperate and many are thinking of leaving the sector,” he added.

He also pointed to increased agricultural production costs, which put an additional strain on farmers.

According to a new report released by INE on Thursday, livestock production has been especially affected as poor grazing conditions have led to an extraordinarily high need for fodder. Meanwhile, the cultivation of winter cereals has also taken severe hits.

Support from the CAP

To help tackle the situation, Dalli announced that the Commission was in contact with national and regional authorities to look into potential support from EU funds. Notably, “several lines of action” were open through the Common Agricultural Policy (CAP), she added.

For example, the basic income support available to farmers through the first pillar of the CAP can be complemented by additional support for specific types of recipients, such as sectors in difficulty. “The Commission has always shown flexibility in relation to the level of advances for these payments,” Dalli said.

She added that rural development funding from the second CAP pillar could also go into measures to support farmers hit by extreme weather conditions, as well as money from the EU’s aid scheme for the fruit and vegetable sector.

Apart from the CAP, Dalli also pointed to the EU’s solidarity fund, to which countries can apply for help in the case of natural disasters with a severe economic impact. The fund, which is part of the bloc’s regional policy, has been used for example in 2020 to help Croatia and Greece shoulder the burden of severe earthquakes.

Portugal and Spain have been calling to mobilise community funds to support their drought-stricken agricultural sectors and are set to raise the issue during the agricultural ministers’ meeting on Monday in Brussels.

“Funds of the European Union are here to support citizens when needed,” Portuguese Socialist MEP Carlos Zorrinho stressed during the debate. He also pointed to Monday’s meeting, where “solidarity measures on the European level will be debated and implemented.”

At the same time, Commissioner Dalli also stressed that, beyond immediate crisis relief, long-term measures would be necessary to prevent and prepare for future droughts.

“Climate change will further increase water scarcity and drought hazard, affecting both its frequency and magnitude,” she warned, adding that EU-wide losses caused by drought could amount to € 9 billion every year.

“This is why it is crucial to accelerate the transition towards sustainable and resilient food systems,” she stressed.

Against this backdrop, the Commissioner also called on Mediterranean countries to establish resilient water management practices and to “make the most” of the national strategic plans for the implementation of the reformed CAP to subsidies in line with sustainable water management.

“We need to underline that water resources are only going to be more scarce in the future,” she concluded.

Not all lawmakers from the affected countries, however, were happy with the Commissioner’s long-term view.

“Certainly we need to plan in the long term structurally, but it is also true that this is a critical point in time, and in the short term, the Commission will need to launch financial support measures outside of the CAP,” Portugal’s Amaro stressed.