The European Commission has unlocked €500 million in aid to farmers hit by falling prices and a ban on exports to Russia, as angry protestors took the streets of Brussels.

The protest involved what organisers said was up to 6,000 farmers, who blocked streets in Brussels with hundreds of tractors, who targeted the heavily-guarded European Union headquarters where the talks took place.

The farmers mainly came from Belgium, Germany and France but there were also farming unions from the UK, Northern Ireland, Lithuania, Latvia, Bulgaria and Czech Republic.

Farmers were blaring horns and carrying banners which read “I produce, I feed but I die” and “For a fair milk [price]”. 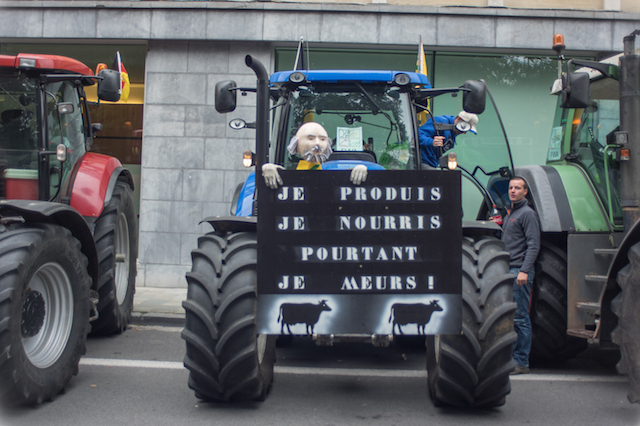 At some point the demonstration turned violent, when protesters started throwing eggs and bottles of milk at Belgian riot police, which briefly used tear gas and water cannons to disperse them.

The lifting of EU milk quotas in March, combined with declining Chinese demand, changing dietary habits and a Russian embargo on Western food products in retaliation for sanctions over the Ukraine conflict, have combined to push down the prices of beef, pork and milk. Farmers are demanding emergency EU funds to tackle the crisis.

In France, agriculture minister Stéphane Le Foll has estimated that around 10% of farms are on the brink of bankruptcy, with a combined debt of one billion euros.

“I am here because we need a regulation for the milk market and other products,” said Charles Culot, a Belgian farmer. “If this situation continues, we will have less and less farmers, as well as worse food quality,” he told EURACTIV.

“It’s hard for me to see that my country has no future […] the prices of the milk are set to ruin our field,” added Heinrich Klein, a 20-year-old farmer who runs a family-owned dairy business in Germany. 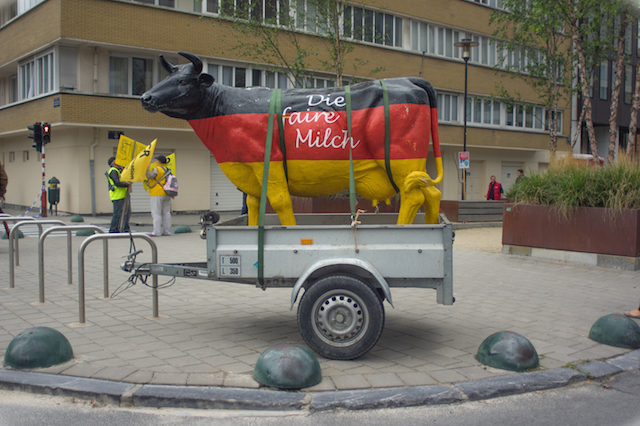 “We came from western Germany by bus, the problems are huge […] approximately 1,000 German farmers are here to shout that the situation is really difficult,” stressed Roths Heinrich, another German farmer.

According to the agenda of Council meeting today, EU ministers will focus “on the state of play of agriculture markets in the EU with a special focus on the difficulties in the milk sector and the animal production”.

In addition, the impact of Russia’s import ban on Union agricultural products iwill be discussed.

European Commissioner for Agriculture and Rural Development, Phil Hogan, did not attend the ministers’ meeting due to health reasons, and was replaced by Commission Vice-President, Jyrki Katainen.

In the afternoon, the Commission unveiled a new package of measures, worth 500 million euros, which it said could be used by farmers “immediately”. It said the aid will focus on three priorities:

“This response demonstrates that the Commission takes its responsibility towards farmers very seriously and is prepared to back it up with the appropriate funds,” said Commission Vice-President Jyrki Katainen who unveiled the package at the extraordinary meeting of agriculture ministers. “This is particularly important, given other competing budgetary demands.”

But despite the additional aid, Albert Jan Maat from European Farmers Union (Copa), said that the Russian ban has put enormous pressure on EU’s food exports.

“The Russian embargo has reduced by half the EU agro-food exports, by 5.5 bn euros. For months farmers have been demonstrating across Europe,” he noted.

“Russia has closed the door to 1/3 of Europe’s cheese […] this depressed the market, and this is where we are now,” told EURACTIV Gary Mc Henry, a farmer from Northern Ireland who participated in the demonstration. He added that Agriculture Commissioner Phil Hogan “should urgently intervene in the market.”

Russia banned the import of certain foods and drinks originating from the European Union, in response to Western sanctions over Ukraine’s crisis.