Delegates from around the world are set to choose the new head of the UN food and agriculture agency (FAO) this weekend in a three-way race between candidates from France, China and Georgia.

The 41st session of the FAO Conference starting in Rome on Saturday (22 June) will appoint the highest governing body of the organisation, elected by a majority vote. The procedure involves elimination of the candidate with the least votes in successive ballots until a majority vote for one candidate is obtained.

Delegates from the 194 member countries will cast their votes on Sunday morning (23 June) around 10 am, after the candidates’ address, scheduled for the evening before.

Of the five runners who launched their bid in March, only three have remained in the race to succeed the Brasilian Graziano Da Silva: French candidate Catherine Geslain-Lanéelle, China’s Qu Dongyu and Georgia’s Davit Kirvalidze.

Last week, the government of India announced the withdrawal of its candidate Ramesh Chand, while a fifth candidate, Médi Moungui from Cameroon, also stepped down as it became clear the race was expected to narrow down to a European and an Asian candidate,  although there is formally no rotation principle at the top of the UN agency.

After an informal process in the Agrifish Council, the 28 EU ministers endorsed Geslain-Lanéelle, the former head of the European Food Safety Authority (EFSA), as the sole EU candidate for the UN top job.

The member states wanted to avoid the mistakes made in the last FAO election in 2011 when both the former Austrian Commissioner Franz Fischler and former Spanish foreign minister Miguel Ángel Moratinos took part in the race.

The latter eventually lost 88 to 92 in the second round against Brazilian candidate Graziano Da Silvia, the current FAO director-general. In response to critics who said he had divided the European vote, Moratinos’ line of defence at the time was that he had presented his candidacy first. 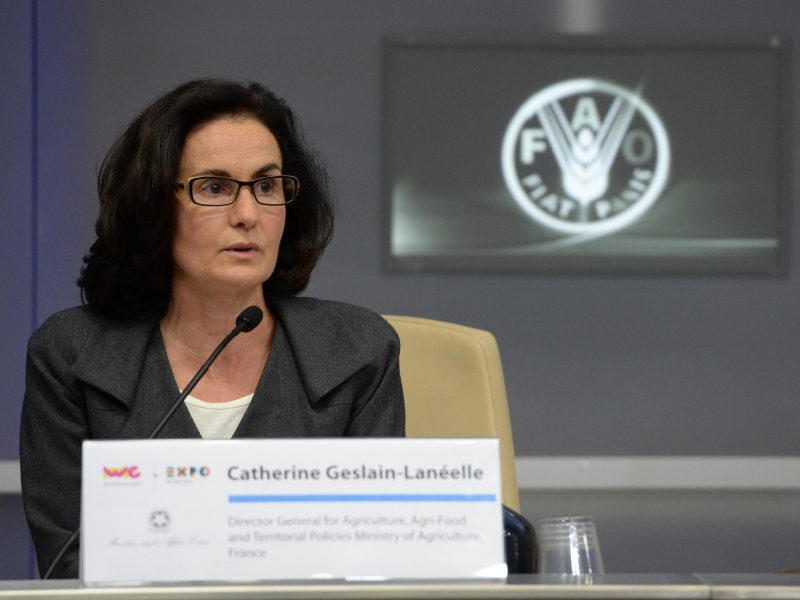 “I’m the first female candidate since the creation of the FAO,” Geslain-Lanéelle said in a debate held in Rome last April. “I found it surprising because we know the important role of women in farming,” she added.

Last Month in Washington, she said she won’t defend the EU position on genetically modified organisms (GMOs) and gene editing, which the US considers too cautious and passive.

Answering a EURACTIV question on the same topic in January, she said she would deal with new plant breeding techniques (NPBTs) at FAO level, if elected, and added she does not believe in a single solution but rather in a mix of solutions for boosting the production.

The last European to head FAO was Dutchman Addeke Hendrik Boerma, whose mandate lasted from 1968 to 1975.

The Chinese and the “American” outsider

Georgia’s Darvit Kirvalidze is regarded as the underdog of the race but he can play his cards right by taking advantage of the rift between the other two candidates.

Former Agriculture minister and now an adviser to Georgia’s Prime Minister Bakhtadze Mamuka, Kirvalidze knows Rome’s bubble quite well, as he has already represented his country in both FAO and IFAD.

He’s also considered the “American” candidate, as he is the director of the Washington-based non-profit CNFA and was a Fulbright scholar at the University of Maryland.

Speaking to EURACTIV on the sidelines of his debate in Rome, the Georgian candidate said he does not mean to rely on geopolitical alliances to be elected.

“Alliance means that you are voting with prejudice and that you are supporting someone just because you are an ally,” he said, adding that “voting by geographical belonging, it’s not the right choice.”

According to him, the choice should be more on who can make things happen and not on who stands behind the candidate because of his or her origins.

He added that the private sector had always led the progress while the role of governments is to provide companies with the right regulatory and institutional environment.

The Chinese candidate, Qu Dongyu, has a good track record in agriculture and, as a vice-minister of agriculture of China, he worked on several rural development projects all over the world and has been in tight contact with many UN countries.

Qu is counselled by Jeffrey Sachs, a professor of economics at the Columbia University and world guru in sustainable development.

Qu focuses his programme on five actions that include the zero hunger target, tropical agriculture, dryland farming, digital rural development and the improvement of the environmental sustainability of the sector.

However, he has to face to the challenge of convincing other delegates that, if elected, Beijing won’t be pulling his strings and act on the global stage through him.