Upon request, the European Commission has confirmed that proceedings are underway not only against Germany for inadequate implementation of the Nitrate Directive, but that Belgium, Spain and Italy are also facing penalties, and proceedings have recently been initiated against Greece.

What nitrate monitoring networks are there in Germany?

There are two measuring networks in Germany. The most extensive, with about 7,300 monitoring sites, is the so-called “Water Framework Directive monitoring network”, which is used to monitor the chemical status of groundwater.

In parallel to this, there is a so-called EUA monitoring network, which is distributed representatively throughout Germany.

Relevant for the EU Commission’s nitrate complaint before the ECJ, however, is Germany’s nitrate report, which must be submitted to the EU every four years. For this purpose, 700 monitoring stations of the EEA network are consulted, which, together, are part of the so-called “EU nitrate monitoring network”.

Until 2015, the network had been much more sparse with only 162 measuring points. However, following the European Commission’s criticism, it had been extended for the latest nitrate report for 2016. 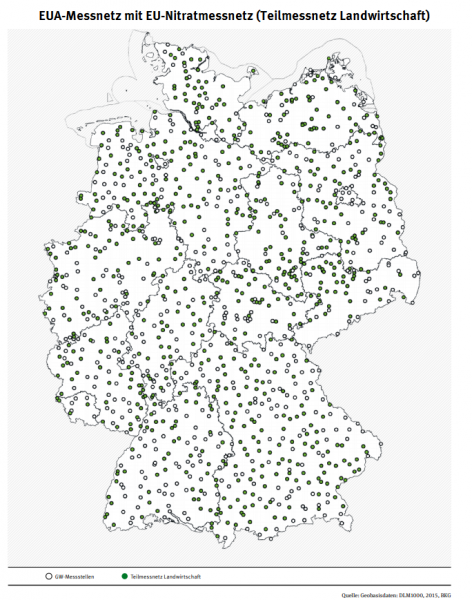 However, this means that the results of the last two nitrate reports are difficult to compare.

Is it true that Germany has a much lower density of monitoring stations than other EU states?

This is indeed the case: While the EU average is eight measuring points per 1,000 km2, Germany only has an average of 1.9 measuring points within the same distance, despite the expansion of the EU nitrate monitoring network.

Does Germany intentionally send only the worst monitoring point values to the EU?

Not directly – Germany only transmits measuring points of the EU nitrate monitoring network to the EU.

However, these monitoring stations are not distributed in a representative way, but are all located in – or near – agricultural areas. As a result, nitrate levels are significantly higher than if monitoring sites were also reported from forest areas, for example.

This is because the EU Nitrate Directive does not specify how and where EU member states should locate their monitoring stations. However, it explicitly requires them to select monitoring sites that are under the “influence of agricultural use”.

“By reporting only those measuring stations that are under agricultural influence, we are, in our view, correctly implementing the requirements of the Nitrate Directive. Of course, if we were to include our entire monitoring network in the nitrate report, the result would be better. But this is not required”, Falk Hilliges, expert for groundwater protection at Germany’s Environment Agency, told EURACTIV.

Hence, it is not true that Germany only sends the worst values to the EU Commission. Yet, only the measuring points under the influence of agricultural use are being deliberately transmitted.

It is also incorrect that Germany has declared the entire federal territory to be a “red zone”. Like a number of other member states – namely Austria, Denmark, Finland, Ireland, Lithuania, Luxembourg, Malta, the Netherlands, Poland, Romania, Slovenia – Germany has chosen the option of declaring the entire federal territory as a “nitrate sensitive region”, meaning that the fertiliser regulation applies across the board. This is not the same as the polluted “red” areas, where additional rules have to be observed. 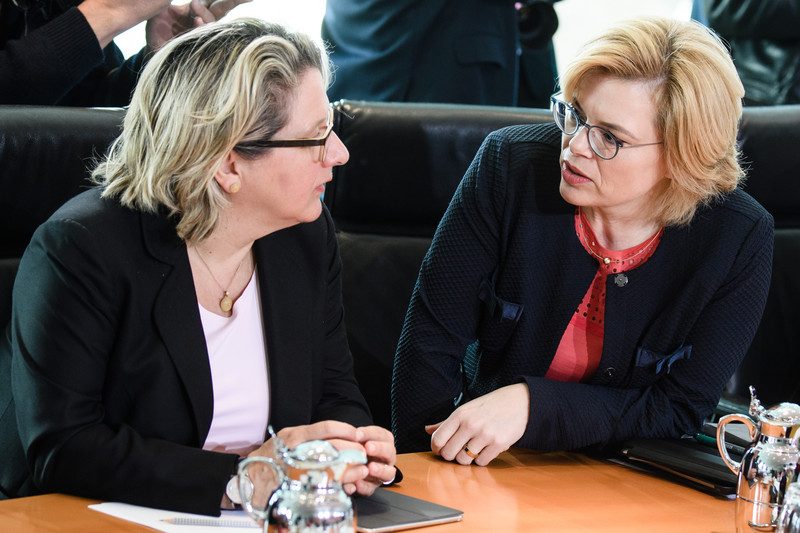 Do other countries send other data to the EU?

Yes, at least partly. As there is no uniform regulation for measuring networks, not all countries adhere to the rule of only transmitting measuring points from agriculture.

“There are other EU member states that report the data of all available groundwater monitoring sites – regardless of the influence of use. Therefore, there is virtually no comparability of nitrate reports across Europe”, according to water expert Hilliges.

Following EURACTIV’s request, the European Commission also confirmed this, although it did not disclose which monitoring networks are indicated by which EU member states.

The ECJ ruling refers to the Fertiliser Regulation of 2014, which was revised three years later in 2017. So why is the EU Commission still holding on to its infringement proceedings against Germany?

In 2018, the European Court of Justice concluded that Germany is not implementing the regulations of the EU Nitrate Directive strictly enough.

At the time, the court referred to the data in the fertiliser report of 2012, but strictly speaking, the Commission criticises something else, namely that the situation is not improving. After all, despite the expansion of the German monitoring network, nitrate levels have remained constant for decades.

For this reason, the EU Commission has repeatedly called on Germany to tighten its fertiliser regulation.

Are today’s farmers being punished for the over-fertilisation of their predecessors?

Groundwater renews itself only very slowly in a process that can take years.

It is thus understandable that many farmers argue that it is unacceptable to be held liable for previous fertilisation excesses, particularly as many farmers have long since been cultivating their fields in an environmentally friendly manner.

“If the causes of high nitrate levels can be traced back to fertilisation that happened decades ago without being linked with current farming practices, farmers should be exempted from abiding by stricter requirements,” demanded the Brandenburg State Farmers’ Association, for example. 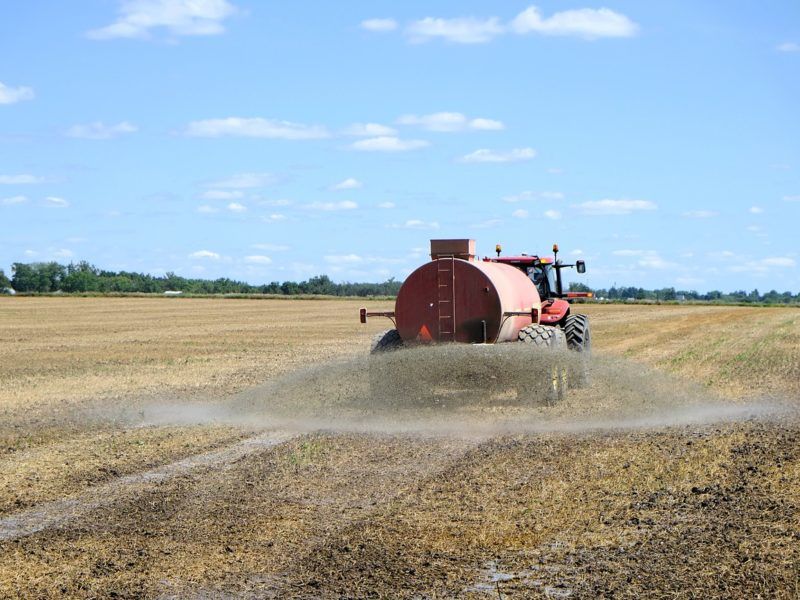 While Germany is basing its nitrate report on groundwater data, the data situation does not, in fact, reflect current management practice. However, the groundwater recharge period depends strongly on geological conditions. Precipitation, soil properties or the water’s flow time vary greatly from region to region.

It cannot, therefore, be said in general terms that the data presents a time-barred picture of reality. On request, Lower-Saxony’s agriculture ministry confirmed, for example, that it is for this reason that measurements are also reported from surface waters where nitrate values increase or decrease much more directly.

How do the German nitrate values compare with those of other European countries?

In May 2018, the EU Commission prepared a report to the EU Council and Parliament on the implementation of the Nitrate Directive in the EU member states.

The report shows that the situation varied greatly from one country to another, but that Germany is in the middle of the field when it comes to the nitrate surplus. In Belgium, Cyprus, the Czech Republic, Denmark, Luxembourg, the Netherlands and the UK, more fertilisers were being applied to fields.

In comparison, the German groundwater has poor values: While the EU average of measured values above the critical threshold value (50mg/L) is 13.2%, in Germany it is 28%. This is only topped by Malta which has a 71% rate.

However, the European Commission noted that “the comparability of the data situation in the member states is limited due to differences in monitoring networks and methods”. 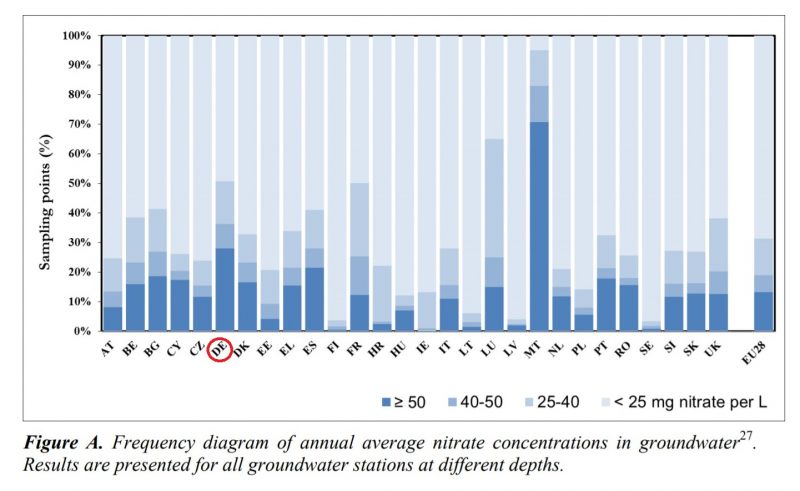 Upon request, the European Commission has confirmed that proceedings are underway not only against Germany for inadequate implementation of the Nitrate Directive, but that Belgium, Spain and Italy are also facing penalties, and proceedings have recently been initiated against Greece.

Farmers refuse to be the sole scapegoats for the nitrate problem.

Indeed, local conditions may also play a role: “A very slow rate of groundwater flow and recharge, low groundwater-surface distances, permeable soil cover layers and a low nitrate retention capacity of the soil can cause nitrate to be concentrated in certain places. The fact that nitrate might also enter the groundwater from the wastewater pipes of settlements has only a very small effect,” said Hilliges from Germany’s Environment Agency, adding that “from our point of view, it plays only a marginal role in the overall picture”.

This means that agriculture remains the largest contributor to the nitrate excesses in groundwater. More than 50 % of the reactive nitrogen compounds that turn into nitrate in the soil come from the agricultural sector. The rest comes in roughly equal parts from industry, transport and private households.

Is there a need for reform the definition of so-called ‘red zones’?

Well, at least this is what German Agriculture Minister Julia Klöckner recently demanded.

For now, each German state has defined its own red zones, meaning that areas with a particularly large number of measuring points have leeway in this. For example, by means of so-called internal differentiation, the state of Lower Saxony recently reduced the red areas from 60 to 39 % of the state’ s surface area.

And it seems like German Environment Minister Svenja Schulze agrees, as she tweeted “the fact remains: We cannot measure the nitrate problem away,” after Klockner’s suggestion.