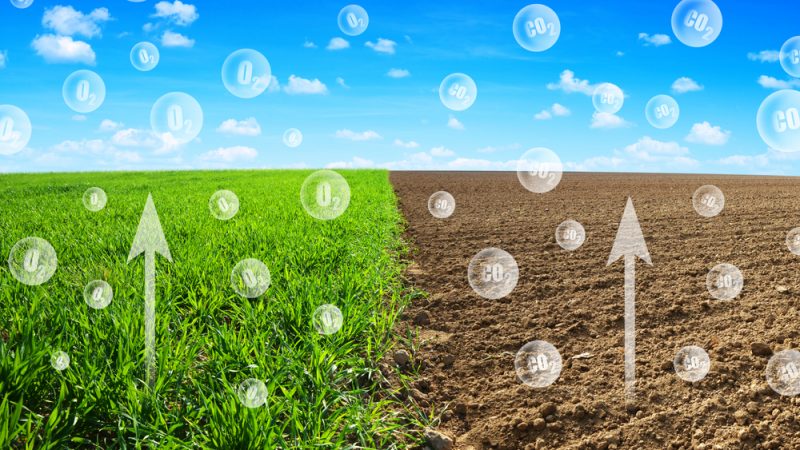 Read this article in Spanish.

The overall objective of carbon farming – a new buzzword in agriculture – is to increase the amount of carbon dioxide (CO2) stored in the soil and thereby reduce its presence in the atmosphere.

The European Commission has said it plans to launch a carbon farming initiative by the end of 2021. A carbon removal certification mechanism already announced in the Circular Economic Action Plan will be presented by 2023.

EU farmers say they have already been voluntarily applying such practices, and there is an “undeniable will” to continue so. However, they want to make sure that carbon farming’s practical implementation will not result in an additional burden for them.

Pekka Pesonen, secretary-general of the EU farmers and cooperatives’ association Copa-Cogeca, said that if carbon farming were to be applied universally, farmers must see the extra costs that will incur compensation.

“The carbon farming initiative and the certification scheme for carbon removals could become an additional source of income for farmers committed to reaching environmental goals. However, it can easily become a financial and administrative burden for them, increasing their costs, potentially reducing their productivity, and lowering their incomes,” Pesonen told EURACTIV.

Pesonen explained that farmers should not be rewarded through the Common Agricultural Policy (CAP) as this would only lead to a redistribution of resources and ignore the fact that farmers and foresters already make a significant contribution to carbon sequestration.

Instead, he stressed that market-based carbon farming schemes could contribute to climate change mitigation.

“This involves the development of a carbon market for market-based carbon crediting schemes, where farmers and foresters are remunerated for their ecosystem service, in accordance with the relevant IPCC guidelines,” he said, referring to the international panel on climate change.

Moreover, he said it must be made sure that carbon farming and carbon credits do not become a default mechanism for big and multinational enterprises to offset their emissions.

“The industry must undertake their own efforts to reduce emissions and not fully rely on farmers’ efforts to sequestrate carbon,” he said, adding that all social actors should work together for a better future.

Célia Nyssens, an agriculture expert at the European Environmental Bureau (EEB), voiced similar concerns, saying farmers’ carbon credits should not be used by “companies like Shell or Microsoft to get to green their own names on the back of farmers”.

Nyssens said there is also uncertainty when it comes to carbon liability in cases of extreme natural phenomena.

“If farmers are to sequester carbon in their soil and produce a carbon credit for that and sell it, and then there’s, for example, a big flooding event or a big drought, and some of that carbon is lost back to the atmosphere, who is liable?” Nyssens wondered.

The expert explained that carbon farming is not something new as these agricultural practices have already been used by farmers.

“It’s just kind of going back to the good practices of our ancestors, but with new scientific understanding of how these practices benefit soils,” she told EURACTIV.

An EU official told EURACTIV that a critical step for carbon farming is establishing a regulatory certification framework based on “robust accounting rules” for high-quality, sustainable carbon removals from natural ecosystems and “industrial solutions”.

The EU official said that land managers are rewarded for their management practice or the actual amount of carbon sequestered via carbon farming.

“The revenue from carbon farming becomes an additional income source from which land managers can benefit in addition to their traditional products such as food and biomass,” the official said.

Land managers, the official added, would at the same time benefit in many cases from the advantages of higher quality land and have somewhat better production performance and higher resilience to climate change.

“Financial incentives that can come from public or private sources will support the large-scale development of carbon farming practices across member states.”

What is the industry doing

Twenty-seven farmers across seven countries in the EU and beyond (France, Spain, Belgium, Denmark, Germany, UK, and Ukraine) participate in a three-year project led by Bayer focusing on climate-smart farming practices like using cover crops and tillage reduction.

This implementation of new practices will be continuously monitored and improved.

According to the company, farmers, experts, and food value chain players work together in a carbon farming lab where they jointly test activities and generate learnings.

Considering that currently, there is no carbon market for farmers to sell credits, the companies have focused on working with governments and other companies to drive climate-smart agriculture.

“In line with the objectives of the EU Green Deal, we established the Bayer Carbon Program to actively contribute to the development of carbon farming activities in Europe. We are working across public and private sectors along the value chain, embracing innovation and putting farmers at the centre of our efforts,” Liam Condon, president of the crop science division at Bayer, told EURACTIV.

This collaboration, he added, will help decarbonise the European food system in a way that works for farmers, the environment and consumers.