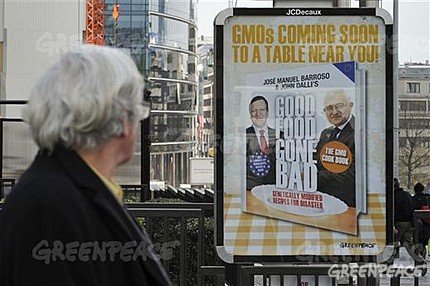 A petition for a Europe free of genetically modified organisms (GMOs) has hit the one million signatories target and will be handed to European Commission President José Manuel Barroso, campaigners have announced.

The petition calling for a moratorium on all new GM crop production in Europe until a proper safety regime has been put in place was launched in March 2010.

Spearheaded by Greenpeace, the initiative follows the authorisation by the Commission of a BASF antibiotic-resistant GM potato that month – the bloc's first GM cultivation approval in 12 years.

According to Greenpeace, one million signatures from across every country in the EU were collected by 28 September and "signatures continue to pour in from across Europe".

Commission President Barroso will be informed of the petition results today (6 October) and the organisers hope to arrange a "personal handover of the petition and signatures in the coming weeks".

The petition is the first to be presented under the 'Citizens' Initiative', a principle enshrined in the EU's Lisbon Treaty since December 2009. The idea is to allow citizens to directly participate in the EU legislative process.

Once an initiative has attracted one million signatures from citizens who are nationals of a significant number of EU member states, the Commission, as a college, is obliged to give serious consideration to the request.

Organisers stressed that the Commission cannot ignore public rejection of GM crops and urged the EU executive "to act swiftly" to address the concerns of European citizens, EU governments and independent scientists.

Even though the EU regulation setting up the Citizens' Initiative is still passing through the EU's lawmaking machinery and is yet to be finalised, the petition calling for a GM freeze can be given full consideration, the Commission said.

A Commission spokesman told EURACTIV that once the EU executive has received the official request, it will have to go through an "admissibility test". As the initiative is the first of its kind, it will be studied particularly carefully, the spokesperson added.

Once the admissibility test is passed and the request has been approved as an official Citizens' Initiative – which the Commission believes will be the case – the EU executive has four months to formulate its response.

EuropaBio, the European association representing bioindustries, described the petition as a "media stunt" produced by anti-GMO campaigners and argued that consumers are "hungry for facts" regarding biotechnology.

EuropaBio's director for agricultural biotechnology, Carel du Marchie Sarvaas, said that "official surveys that ask serious questions of European citizens and take a statistically relevant assessment demonstrate that there is not widespread concern about GMOs".

Therefore the association feels that the petition does not accurately reflect Europeans' thoughts on the subject. "It is widely known that the online petition counter had to be re-set by the organisers on at least one occasion due to inconsistencies in the sign-up process," added du Marchie Sarvaas.

In a controversial move in March, the European Commission gave the green light for the first genetically-modified potato, Amflora, to be cultivated in the EU.

The decision includes strict cultivation conditions to prevent GM potatoes from remaining in fields after harvest and to ensure that Amflora's seeds are not inadvertently disseminated into the wider environment, the Commission explained, in a bid to allay fears of cross-contamination.

Amflora is not meant for human consumption and is cultivated mainly to provide starch for the paper industry.