In 2007, the largest European food companies committed themselves to an “EU Pledge” in which they promised to, “change the way they advertise to children”. They also pledged only to advertise foodstuffs to children under 12 if the products fulfill specific nutritional criteria. However, to date the manufacturers market almost exclusively unhealthy foods, as documented on Monday in Berlin by the study carried out by the NGO Foodwatch.

Foodwatch examined 281 products produced by German manufacturers who signed the EU Pledge, including Kellogg’s, Ferrero, Danone, Nestlé and Coca-Cola. The study says that only 29 of these products should be marketed to children according to the WHO’s criteria for a nutritionally balanced diet.

“With its sweet-sounding commitments, the food industry placed itself in the front line of the fight against obesity and malnutrition – whilst simultaneously marketing tons of sweets and junk food, specifically at children. A sad PR manoeuvre,” said Foodwatch analyst Oliver Huizinga.

Among the companies tested, McDonald’s and Nestlé scored relatively well. Nearly a third of the products that the fast-food chain markets at children satisfy the WHO’s nutritional criteria. In Nestlé’s case, 11 of the 42 products that were tested met the criteria. Coca-Cola and PepsiCo performed less well. Neither market a product that can be classed as healthy, according to the WHO’s classification. 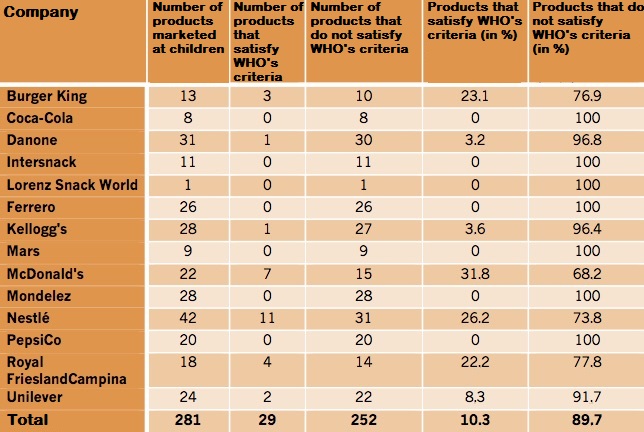 “The EU Pledge has failed”

The study shows that the food industry has not been effective, state both the German Diabetes Association (DDG) and Deutsche Diabetes-Hilfe, a German organisation for people living with diabetes. The self-imposed nutritional limits were too lenient. In children’s cereal, a sugar content of 30% is permitted, yet the WHO recommends a maximum content of 15%. Furthermore, according to experts, even fatty-salty crisps fulfill the criteria of the EU Pledge.

The EU Pledge does indeed prohibit conventional advertising, but the use of comic-style characters on packaging is still allowed. The age limit of 12 is also too low, according to medical experts, who call for it to be raised to 16. Large companies such as Dr. Oetker, Haribo, Bahlsen, Ehrmann and Hipp did not even sign up to the Pledge. “The strategy of voluntary self-limitation, information and education has failed,” says Dietrich Garlichs, the Managing Director of the DDG.

A comprehensive ban is the only solution

In Europe, children live in an environment that encourages people to eat unhealthily and to not do enough exercise, saturated as it is with fast-food and soft drinks, according to Garlichs. A balanced diet should be the key to a healthy life. Overweight children mostly remain overweight into adulthood.

Obesity is one of the main causes of noncommunicable diseases, which include cardiovascular disease, cancer and diabetes. Over six million people in Germany suffer from diabetes. Since 1998, this number has risen by 38%.

Health experts and Foodwatch are caling for a comprehensive advertising ban on products that are considered to be unhealthy by the WHO’s new nutritional criteria. These are products such as chocolate, energy bars, sweet pastries, fruit juices, energy drinks and ice cream.

In Spring 2015, WHO/Europe published a model that allows governments to categorise foodstuffs as healthy or unhealthy according to uniform criteria and to implement an advertising ban based on the results. Stefanie Gerlach, of Deutschen Diabetes-Hilfe, believes this is an opportunity for the whole of Europe. “In the EU, only four countries, including Ireland and Great Britain, have so far introduced specific measures that meet the WHO’s new criteria,” says Gerlach.

“Gröhe is out of his depth”

“A law must be put in place that finally regulates marketing to children effectively,” adds Foodwatch boss Thilo Bode.

In the past, German Minister of Health Hermann Gröhe has spoken positively about the EU Pledge, recalls Bode. “The individual who is responsible for protecting our children, but does so through ineffective means, puts the affairs of the food industry above our children. Such a minister is out of his depth.”

For example, the EU Pledge provides a common set of nutrition criteria based on European and international guidance, to determine whether products can be advertised to children under 12. “This essential fact was not taken into account by the authors of the report,” EU Pledge argued.

The EU Pledge said it had demonstrated a significant impact to date in reducing children’s exposure to food and beverage advertisisng, according to an annual independent third-party monitoring. For example, an average child under twelve in the EU today sees 88% less ads than in 2005 for products that do not meet the EU pledge nutrition criteria in or around children’s programmes.

In Germany, 15% of children are overweight, with 6% being obese. They are at increased risk of contracting diseases such as type 2 diabetes, joint problems, high blood pressure and cardiovascular issues. Compared to the 1980s, the proportion of overweight children has increased by about half.

In July 2013, EU health ministers adopted the Vienna Declaration on Nutrition and Noncommunicable Diseases in the Context of Health 2020. This measure should reduce the pressure on children from unhealthy-food marketing. Ministers gave the WHO the mandate to create a nutrient profiling model. This model should give governments an effective tool that can be used to establish legal measures in relation to children's marketing.

The WHO model follows the principle that products that contain more than 1 gram per 100 grams of trans fat may not be advertised. Additionally, products that derive 5% of their total energy from alcohol, as well as basic products in food category 1 (chocolate and confectionary, energy bars, sweet toppings and desserts), 2 (cakes, sweet and assorted pastries), 4 (fruit juices, energy drinks) and 5 (ice cream) may not be advertised.

Generally, products from category 13 (fresh and frozen meat, poultry, fish, eggs) and 15 (fresh and frozen fruit, vegetables and legumes) may always be advertised. Food from the other categories may only be advertised, so long as the maximum quantity of critical nutrients or nutritional energy per 100 grams is not exceeded.