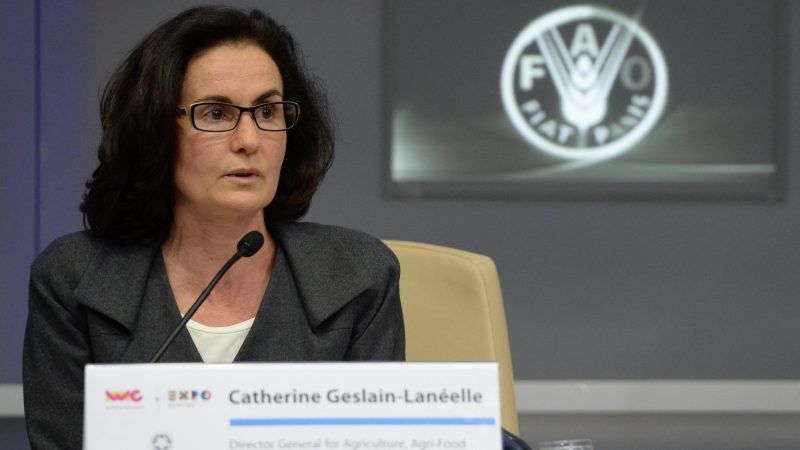 French Catherine Geslain-Lanéelle led the European Food Safety Agency (EFSA) from 2006 to 2013 and now is running to become the next FAO director general. [EPA/MAURIZIO BRAMBATTI]

The former head of the European Food Safety Authority (EFSA), Catherine Geslain-Lanéelle, will kick off her campaign to lead the UN food and agriculture agency today (16 October), after being endorsed as the sole EU candidate.

The Austrian minister for Sustainability and Tourism, Elizabeth Köstinger, announced yesterday the closing of the informal process to designate a European candidate for the top UN job in Rome.

“Catherine Geslain-Lanéelle will run as a sole candidate for the EU and we have every faith that before the election next year, she will be the first woman to become director general of the FAO,” Köstinger said in the press conference.

However, it is still unclear whether the French candidate gained the support of all the 28 EU member states.

Before the announcement, a diplomatic source confirmed to EURACTIV.com that almost 20 member states had informally backed Geslain-Lanéelle. During the entire process, “a high number” of member states had supported her candidacy, said another EU source.

The lack of explicit consensus on the French candidacy reveals latent disagreements among EU countries, even though no other member state had presented a rival bid, nor spoke against the French proposal.

The election of the next director-general of the Rome-based UN Food and Agriculture Organisation (FAO) was on the agenda of a meeting of EU farm ministers on Monday (15 October).

The Austrian presidency of the EU raised the topic during the meeting held in Luxembourg, outlining the timetable and the only bid received so far. However, no member state asked for the floor on the issue, a diplomatic source told EURACTIV.com.

France supported a single European candidacy in order to increase its chances of success, a diplomat told EURACTIV.

The Council of the European Union, the body representing the 28 EU member states, also confirmed the importance of having a single candidate for Europe, in order to start lobbying in one direction as quickly as possible.

However, it seems highly unlikely that Catherine Geslain-Lanéelle will run as the sole EU candidate, EU sources said. Rather, she is expected to run as a French candidate supported by other European countries.

There is no formal procedure to designate a candidate for an international organisation office and the Council has no such specific authority on this matter.

Both Bulgarian and Austrian presidencies of the EU gave member states the opportunity to propose candidates, in order to present a single European bid for the FAO election next summer.

Last January the member states agreed on an informal process to agree on a single candidacy from the EU and they defined a procedure, as well as a clear timeline.

#AgriFish
Today Minister @StTRAVERT announced that France supports my candidacy to the position of DG #FAO
➡I am proud and honoured and ready to face the challenge pic.twitter.com/Xd2leJy1fO

The Austrian presidency decided to close this process on its own initiative. There was no vote on the matter, nor the presidency collected informally all member states preferences.

For this reason, yesterday’s announcement regarded the ending of the procedure of selecting a single candidacy and not an explicit European support to the French candidature.

Before the farm ministers meeting, an EU source said that there was no rush since the window for sending applications will be closed at the end of this year and even Monday Agrifish meeting was not considered definitive.

Lesson from the past

The Council wants Europe to avoid the mistakes made in the last FAO election when member states failed to submit a single European candidacy.

In 2011, both the Austrian former Commissioner Franz Fischler and Spanish former foreign minister Miguel Ángel Moratinos took part in the race. The latter lost 88 to 92 in the second round against Brazilian candidate Graziano Da Silvia, the current FAO director-general.

In response to critics who said he had divided the European vote, Moratinos’ line of defence at the time was that he had presented his candidacy first.

The election of the next FAO director-general will be held next June, bringing together all 194 member states of the international organisation. Graziano da Silva’s mandate will expire just before 31 August.

The race is expected to oppose a European against and an Asian candidate, although there is formally no rotation principle at the top of the UN agency. An FAO spokesperson told EURACTIV that some formal candidatures have already arrived.

No European has held the FAO director-general position since Dutchman Addeke Hendrik Boerma, whose mandate lasted from 1968 to 1975.

Geslain-Lanéelle will kick off her campaign on Tuesday (16 October), on World Food Day.