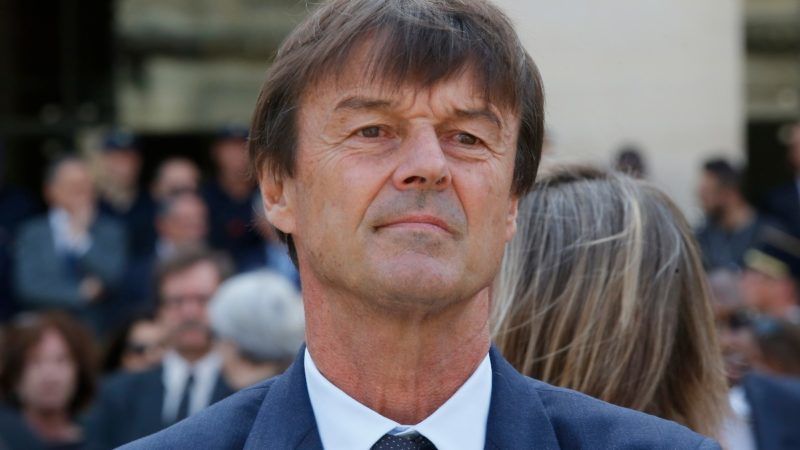 The protesters spread straw on the tarmac of the Champs d’Elysee to “symbolise that agriculture is walking on thin straw”, a French expression signifying the sector is in danger, explained Olivier Georges, a farming union leader

“Argentine Soy”, “Macron kills” and “Ukrainian radioactive wheat” were the slogans written on a container blocking the entrance of the large avenue.

Farmers were protesting against the possibility of importing agricultural products treated with pesticides like glyphosate, while the French farmers’ union (FNSEA) is afraid of France’s declared intention to ban all herbicides in France.

“Farmers are in great difficulty, their average income is €350, this is no longer viable”, said Olivier Georges.

“We are asking Emmanuel Macron to respect his campaign promises. He said there will be fewer interventions on competition, but what his minister Nicolas Hulot is doing will deliver the opposite,” Georges said.

“In France, we produce clean food, and we want to ban products like glyphosate, whereas in other countries like Russia we have an influx of wheat containing traces of products that we haven’t used for 15 years. We need to be acting unitedly. We produce here, but our fellow citizens are eating products produced abroad, and with a number and concentration of products that is intolerable.”

“I’m not here to harass farmers”

While a group of farmers was received by Emmanuel Macron’s agricultural adviser, Nicolas Hulot made a surprise visit to the demonstrating crowd.

He addressed farmers directly: “I am open to discussion, and perhaps you don’t believe me, but I share your objectives. First of all, you need stability, confidence, and security. But nothing can be solved in the span of an hour. […] Secondly, I don’t want to take any risks on health. I am not a scientist and I won’t affirm things looking into a crystal ball. But I do not want to find myself in a few years down the line in front of a court because we knew but we didn’t act.”

“Let’s ban chlorine from our water pipes then!” argued one farmer. “What about other countries?” asked another.

Hulot answered: “Europe has an important role. We need to have a discussion on the Common Agricultural Policy. But if we fall into the trap of fighting one another, we will all lose. We have a solution. This is what I wanted to say to you: I am not dogmatic, or here to harass farmers.”

In July, the European Commission proposed renewing the licence of glyphosate, the most popular pesticide in Europe, which expires at the end of 2017. The vote on the authorisation should take place in early October.

France announced it intended to vote against the proposal. A qualified majority is required, and France’s veto could be crucial.

In the midst of protesters, some people warned: “it’s been three years without income, we are at the bottom of the barrel.” “I am absolutely aware of this,” said Hulot. “The first mistake on my side would be to ignore you, and not engage in debate with you until we find a shared solution.”

Samuel Vandaele, secretary of young farmers, insisted: “You are looking at desperate farmers: No income, and always new regulations to follow. Glyphosate scrapped in 2018, and diesel to go by 2040. We wonder why you have given time to adapt on diesel, but not on glyphosate.”

Nicolas Hulot engaged in debate but had to move on to the council of ministers. Before leaving, he said: “One thing is to say ‘re-authorised for the next ten years’. But we know that this approach doesn’t change anything.”

The European Commission stands ready to insert a clause referring to biodiversity in the glyphosate renewal proposal if requested by member states, a Commission Spokesperson told EURACTIV.