The European Commission’s suggestion that EU member states co-finance part of the Common Agricultural Policy (CAP), the biggest single consumer of the bloc’s budget, has met with steady support in Germany and exasperation in France. EURACTIV France reports.

Brexit is causing headaches far beyond the UK’s borders. The EU executive’s proposal to fill the hole left in the EU’s finances after Britain’s departure has provoked ire in France.

“The European Commission is clearly making a mistake with this proposal! It is a way to limit Germany’s overall contribution to the budget but it makes absolutely no sense,” a French diplomatic source told EURACTIV.

Brexit will leave a €10bn hole in the EU’s €150bn annual budget. But at a time when demands on EU coffers are rising, particularly in terms of defence and security, no member state seems willing to up their contribution to cover the shortfall.

With this in mind, the Commission’s reflection paper on the future of Europe focuses on ways to cut current levels of spending.

But beyond this questionable logic, one more element has come up against French resistance: the White Paper suggests asking member states to co-finance the CAP, which currently consumes around 40% of the EU budget.

France plans to table a counter-proposal this summer, combining flexibility measures with direct payments to farmers. While the Commission’s proposal has yet to provoke an official reaction from Paris, the agricultural sector is preparing for battle across Europe.

Farmers fear their subsidies will be cut drastically if responsibility is handed down to national governments. 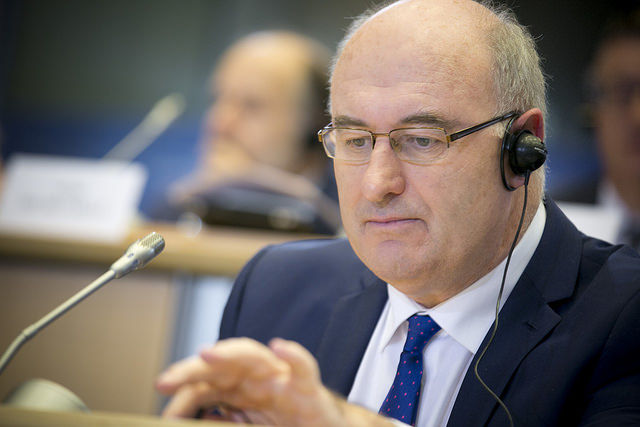 A letter, sent by the French farmers’ union to its local members, raises concerns about the credibility of the post-2020 CAP consultation, and data protection linked to it.

“It looks like the analysis of the CAP was carried out by a British tabloid,” said Yves Mandre from FarmEurope, whose members are bewildered by the proposal.

For the organisation, the fact that 80% of CAP funds go to 20% of farms that account for 90% of all agricultural production is logical. Mandre denounced the analysis as “biased” and said it had been prepared by people with little connection to the issues at stake.

The reflection paper was not produced by the Commission’s directorate-general for agriculture (DG AGRI) but by experts at DG BUDGET, currently within the portfolio of German Commissioner Günther Oettinger.

Experts fear that a system of CAP co-financing would lead to a renationalisation of agriculture policy and create big discrepancies in competitiveness between the EU’s richer and poorer member states.

“The thing is that the Commission claims to be working to preserve the single market. It’s like painting a wall in black and white at the same time and trying to say it will end up white,” said Madra.

With an annual budget of €60bn across the 28 EU countries, the CAP is the most expensive of the bloc’s policies. It is both a pillar of the European construction and a point of constant and heated debate.

But while the Commission’s latest reform proposal has raised heckles in Europe’s South and East, it is not universally decried.

One such point is the question of own resources for the Union, seen by some as a federalist solution to the problem of falling member state contributions to the EU budget.

“The Commission had tried to increase the number of financial instruments available by blending private and public funds. We see now that this did not really work, so we have to find another way,” she said, citing a border carbon tax and a European Financial Transaction Tax as possible future sources of revenue for the EU.

In its reflection paper, the EU executive dedicated just one paragraph to the question of own resources. The issue is almost unanimously agreed upon in the European Parliament and has even convinced many in the executive itself.

But member state governments are unwilling to accept the establishment of a new tax over which they would have no control.

Like her Green colleagues, Thomas is critical of the automatic nature of the CAP’s direct payments, “which are a boon to the big cereal producers, who have large tracts of land, but not for smaller farmers”.

Beyond the CAP, the reflection paper evoked a squeezing of the EU’s cohesion funds, which could be adjusted as required. Payments are already slightly higher in the bloc’s poorer countries but under the proposed system, the gap could widen.

Designed to start a debate on the post-Brexit funding of EU programmes, the paper presented by Commissioner Oettinger on 28 June has so far not provoked any official reaction.

“It is also because the Commission has little credibility, with Juncker hardly to be seen and an almost non-existent mid-mandate record, we can hardly say it is a major political force,” railed one Parliament source.

Even Jean Arthuis, a Liberal MEP (ALDE group) and member of the budgets committee, was less than impressed by the document.

“We are at a tipping point. We need to launch a big debate on what we want from the Europe of tomorrow and adjust the budget accordingly, not do the opposite by throwing together a DIY budget,” he said.

France, under the leadership of President Emmanuel Macron, intends to launch a European level debate by organising national conversations and Europe-wide conventions on the future of the European project. Germany is the country chosen to get the ball rolling.

A technology platform will help collect and analyse the opinions of citizens across Europe, following in the footsteps of the IT system behind the En Marche! campaign in France.