Ahead of Thursday’s European Council, where leaders were trying to strike an agreement on the next EU long-term budget, farmers gathered in Brussels to speak out against the downsizing of the bloc’s main farming subsidies programme.

The ambition of making Europe the first climate-neutral continent by 2050 requires strong efforts from everyone, including the agricultural sector. But farmers feel they are the ones who will bear more weight on their back in making their production more sustainable with considerably less money.

Although agriculture spending still represents the lion’s share of the EU’s long-term budget, the CAP’s proposed allocation of €329.2 billion under discussion now is low compared to €383 billion in the current Multiannual financial framework (MFF) considering EU27 only.

In particular, the rural development support, the so-called CAP’s second pillar, was further trimmed by €7.5 billion in the last draft budget.

For Pekka Pesonen, secretary-general of EU farmers organisation Copa-Cogeca, the problem is that the level of ambition on agriculture at the EU level does not match the talks on financing.

“EU leaders expect farmers to deliver more, but then they actually take the specific tools for that policy area, the rural development, away from them and at the same time they cut the first pillar too,” he told EURACTIV on the sidelines of the protests.

“This sends the message that they expect farmers to deliver more but they are not going to pay for it,” he added. 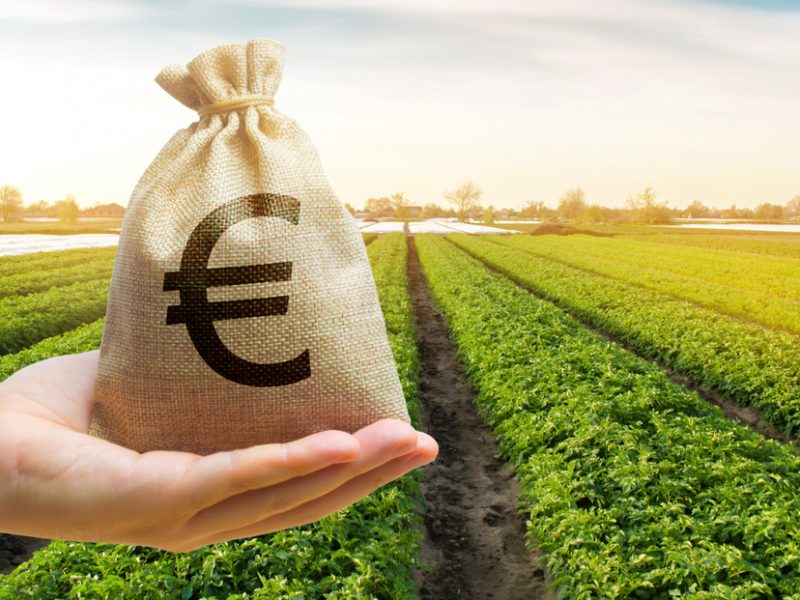 On Thursday morning, farmers from the Baltic countries demonstrated at the Schuman roundabout, the heart of the EU quarters, demanding a fair distribution of direct payments, on par with other European countries.

Introduced in the 2013 CAP reform, external convergence aims to reduce differences in the average support per hectare after Eastern enlargement. This process is designed to gradually allow equal direct payments for all the member states.

However, this concept has recently faced criticism by some EU countries who oppose including this in the next CAP.

Latvia’s Prime Minister Krišjānis Kariņš joined the protests. “We’re not asking for anything more than a level playing field,” he told EURACTIV. “If we have it in other aspects of the Single Market, why not in the farming sector?”

He added the Baltic farmers are competing in the same market with others so they should be subsidised fairly as well.

In the Baltic countries, farmers already face a rather short growing season and tough environment. “Any farmer would probably smile hearing that it’s cheaper to produce in the Baltics. That’s not the case,” Kariņš said.

But convergence is not the only thing that worried Baltic farmers. “We are ready to give more for the environment but this will cost money and we need to spend more to fulfil these targets,” Maira Dzezlzkaleja from Latvian farmers’ organisation Zemnieku Saeima told EURACTIV.

Roomet Sõrmus, chairman of the Board at the Estonian Chamber of Agriculture and Commerce, concurred, adding that in the Baltic states environmental investments come mostly from the rural development funds.

Around lunch, a larger group of farmers started protesting before the arrival of EU leaders, welcoming them with dozens of tractors parked in the Parc du Cinquantenaire area.

The demonstration was organised by the Belgian Fédération Wallonne de l’Agriculture (FWA) and Boerenbond, as well as by the young farmers’ organisation, the European Council of Young Farmers (CEJA).

“European small-holders are well aware of the challenges we have to face, such as climate change, sustainability, animal welfare. But in order to be ambitious, we need means,” said Marianne Streel, president of the Wallonian Farmers Organisation.

Belgian farmers already faced a cut of almost 20% of the budget in the current CAP. “And we had in parallel a decrease in production costs, which are higher than the selling prices of the products when they leave the farm,” she added.

The FWA recently had meetings with European Council President Charles Michel’s cabinet and Belgian prime minister Sophie Wilmès, but pessimism persists over the highly likely downsizing of the CAP spending.

Young farmers are not giving up without a fight though.

“We’re confident that member states will come with a new proposal and we’ll continue to protest every time there is a Council to remember the important role of agriculture in feeding European citizens,” said José María Castilla, head of Brussels’ office of the Spanish young farmers’ organisation ASAJA.

“We’ve got to stick together as farmers in Europe, otherwise we will be increasingly crushed by both Asian and American giants,” said Gianfranco Maltese, Italian young winemaker who took over his family’s business which has been running for five generations.

But farmers have also friends in the negotiating room.

At his arrival, French President Emmanuel Macron said that he will fight for a Common Agricultural Policy that matches the level of the EU’s ambitions.

“We can’t talk about climate policy and biodiversity policy if we do not progressively transform our CAP,” he argued.

During his intervention before the other leaders, Italy’s Prime Minister Giuseppe Conte took a clear and firm stance in favour of the CAP and its cohesion funds, a source in Italy’s government said.

One response to “From Farm to Pitchfork: farmers take to Brussels streets ahead of EU summit”