The German environment and agriculture ministries now have a clear objective and want to implement the European Court of Justice's ruling  "as quickly and as fully as possible, and to avoid a possible conviction," according to the ministry. [Photoagriculture/ Shutterstock]

The European Commission has criticised Germany for its excess nitrate levels in groundwater. If Germany’s environment and agriculture ministries fail to put proposals on the table quickly, high fines could be imposed. But this is not the only warning from Brussels. EURACTIV Germany reports.

In a warning letter yesterday (25 July), the European Commission called on Germany’s environment ministry to increase its efforts to reduce nitrate levels in groundwater. By doing so, Germany would comply with a ruling of the European Court of Justice of June 2018.

If the German government does not propose appropriate measures within eight weeks, the next stage of proceedings might be imminent. In the event of another ECJ judgment, Germany would face fines as high as €850,000 per day.

The debate about excessive nitrate levels in German groundwater has been going on since 2013 when the Commission sent its first letter of formal notice to Berlin. EU member states are subject to a nitrate directive which provides thresholds. Member states need to transpose the directive into national law.

Closely linked to this is Germany’s revision of the 2006 fertiliser regulation in 2017, which the European Court of Justice found to be insufficient.

By May 2020, a new regulation needs to be tabled. However, negotiations between Germany’s environment and agriculture ministries, the Länder, the European Commission and the German farmers’ lobby have been tough.

In June, the two ministries concerned had agreed on some proposals to adapt Germany’s fertiliser regulation and sent them to Brussels.

“The Commission was obviously of the opinion that we were not fast enough,” said Jochen Flasbarth, state secretary of the German environment ministry.

The German ministries now have a clear objective and want to implement the European Court of Justice’s ruling  “as quickly and as fully as possible, and to avoid a possible conviction,” according to the ministry.

28% of the measurement points above the maximum threshold

The European Commission’s move was ‘disproportionate and inappropriate’ according to the union. Especially since the EU promised member states more scope for implementation on matters related to agriculture and water protection.

“The Commission is tampering with the fertiliser regulation with an exaggerated urge for detail,” said Bernhard Krüsken, secretary-general of the German Farmers’ Association, to EURACTIV in March.

“The crazy thing is that the Commission was informed about the process this whole time. It knew all drafts of the Fertilisation Regulation. Yet, it waited until the Regulation was adopted in order to reinforce its old infringement procedure. This gives the impression that it was intentional in letting the process drive full throttle against a wall,” Krüsken said. 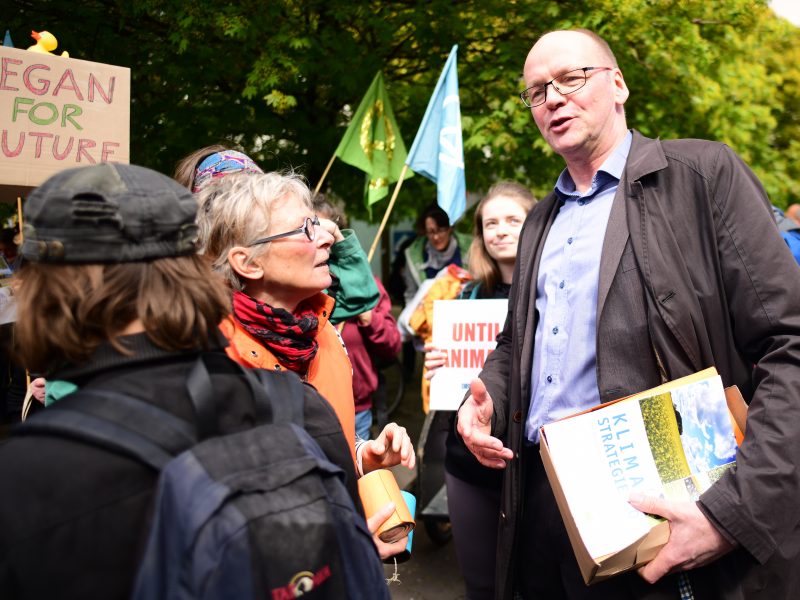 The problem of nitrate pollution in Germany is mainly due to mass livestock farming, which produces large quantities of liquid manure. The nitrogen it contains can only be absorbed to a limited extent by the soil, and the rest seeps into the groundwater.

For years, nitrate levels in water have been too high. And according to the environment ministry’s latest nitrate report of 2016, 28% of the measurement points exceeded the maximum permissible level. This has hardly changed in recent years, as groundwater sometimes takes decades to regenerate.

Farmers are trying their best to comply with strict regulations relating to liquid manure. But groundwater contains large amounts of excess nitrate from years ago, according to the farmer’s association.

Nitrate does not pose a significant threat to adult humans. However, while it promotes the growth of algae and other plants, others die out, which poses a threat to water biodiversity.

One concerns the protection of flower-rich meadows, which are particularly crucial for insects.

“Living meadows and pastures are as important for our biodiversity as the rainforests of South America. Germany, however, has allowed for valuable meadows to disappear, leading to their desertification,” commented Leif Miller, the managing director of the environmental NGO NaturschutzBund Deutschland.

The European Commission monitors compliance with applicable EU law in European member states and regularly initiates infringement procedures. The Commission will send a letter of formal notice, to which the member state addressed needs to reply within two months. Following that, the Commission sends an opinion, based on which proceedings can be initiated before the ECJ.

There are currently 78 active infringement proceedings against Germany.