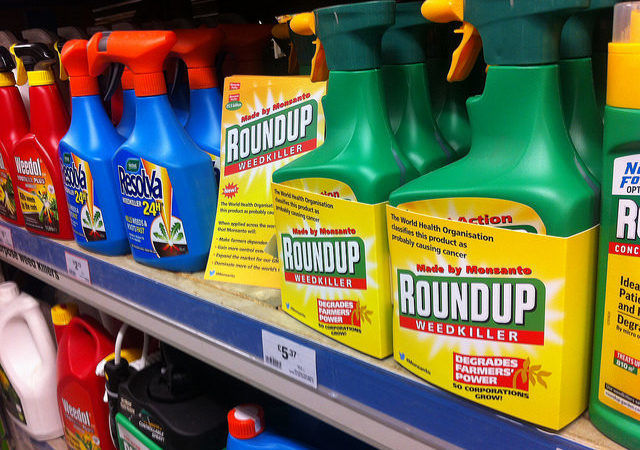 Opponents of glyphosate, led by Greenpeace, point to research from the World Health Organization that concludes it may be carcinogenic, and are calling for an outright ban. [Global Justice Now/Flickr]

The ECHA Risk Assessment Committee (RAC) concluded that the available scientific evidence did not meet the criteria to classify glyphosate as a carcinogen, as a mutagen or as toxic for reproduction.

ECHA’s assessment paves the way for Brussels to make a final decision on the chemical, despite deep divisions in the 28-member European Union over its use.

Glyphosate is used in the best-selling herbicide Roundup, produced by the US agro-chemicals giant Monsanto.

Opponents of glyphosate, led by Greenpeace, point to research from the World Health Organization that concludes it may be carcinogenic, and are calling for an outright ban.

In May, a review carried out by experts from both the WHO and the UN Food and Agriculture Organization said, “glyphosate is unlikely to pose a carcinogenic risk to humans from exposure through the diet”.

“Glyphosate should not be classified as carcinogenic,” Jack de Bruijn, director of the risk assessment committee of the European Chemicals Agency, said at a news conference.

De Bruijn said the weedkiller had not been found to cause genetic or reproductive defects, a finding based on “extensive evaluation of all the information that was available for this substance”.

In July 2016, EU member states approved an 18-month extension of an approval for glyphosate pending the agency’s report but limited its use.

Among member states, France and Malta opposed re-approving the chemical, while Germany was one of seven countries to abstain on the issue.

The European Commission has been waiting for the agency’s assessment to make a final decision on approving glyphosate for general use.

European Commission Spokesperson Enrico Brivio said the EU executive “took notice” of ECHA’s opinion, which was “based on scientific evidence”.

He noted, though, that this is not the end of the process since the draft opinion will now be subjected to an editorial check with ECHA before being formally submitted to the Commission.

“A decision has to be taken within 6 months of receipt of the RAC Opinion from ECHA, or by the end of 2017 – at the latest,” he added.

Graeme Taylor from the European Crop Protection Association (ECPA), which represents the pest control industry, said “This classification is consistent with the existing 90,000 pages of evidence, 3,300 peer-reviewed studies, the opinions of the European Food Safety Authority (EFSA), the German Federal Institute for Risk Assessment (BfR) and regulatory agencies worldwide – glyphosate is not carcinogenic.”

“We expect the European Commission to move swiftly with the registration process for the substance in the EU and grant a 15-year approval – the same approval that was originally suggested by the EC before the substance became the subject of a political and emotional debate rather than a scientific one,” Taylor added.

In a statement, Greenpeace attacked ECHA saying that it “sweeps glyphosate cancer evidence under the carpet”.

Greenpeace EU food policy director Franziska Achterberg emphasised that the data vastly exceeds what’s legally necessary for the EU to ban glyphosate, but ECHA has looked the other way.

“For the EU to make decisions based on science, it can’t distort the facts. If the EU doesn’t get this right, people and the environment will continue to be the lab rats of the chemical industry.”

On the same line, the Health and Environment Alliance (HEAL), a campaign group, said the decision was a setback for cancer prevention adding it contradicted the world’s most authoritative cancer research agency – the World Health Organization’s International Agency for Research on Cancer (IARC), which classified glyphosate as a “probable carcinogen” in 2015.

“We expect that in the future, IARC will be recognised as having been right.  But meanwhile, Europe is set to give glyphosate the green light and therefore public health will lose out on an important opportunity for cancer prevention. Cancer rates can be brought down by taking hazardous chemicals off the market,” Génon K. Jensen, executive director of HEAL said.