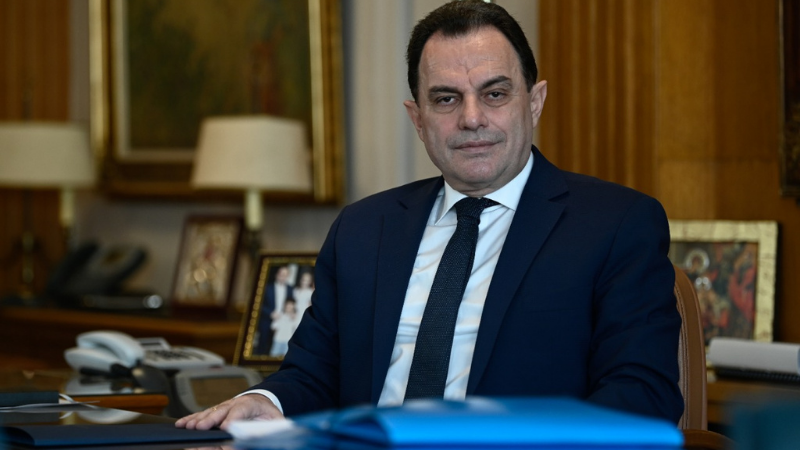 The Greek minister said there is a strong concern about the 'green orientation' of agriculture and the EU's food security due to the war in Ukraine. [ΥΠΑΑΤ]

Georgios Georgantas is the Greek minister for agriculture and rural development.

The plans, which set out the ways in which EU countries intend to meet the nine EU-wide objectives of the reformed CAP, have undergone the first stages of evaluation from the European Commission.

The executive recently sent the first batch of observation letters to member states, including Greece, with their initial comments. The comments heavily emphasised the states’ need to adapt to the changing situation in Europe following Russia’s invasion of Ukraine on 24 February.

Can you give us an overview of some of the comments received on Greece’s national strategic plan?

These comments focus mainly on the need to adapt the strategic plans of all member states to the new circumstances created by the war in Ukraine, since when they were submitted, this event with its significant consequences, including in the agri-food sector, had not yet occurred.

Comments also focus on the issues of increased environmental concern and more effective linking of the policy measures contained in our strategic plan, and also on coupled aid.

Have there been any discussions about changes, or even additions, to your plans to help deal with the war in Ukraine?

The war in Ukraine has triggered the political reflexes of both our government and the EU so that we can immediately and effectively provide sustainable solutions to critical issues.

These include topics such as energy autonomy and renewable energy, the reduction of input costs via investments in new and digital technologies, promoting the collective organisation of producers to strengthen their position in the value chain and expanding financial and risk management tools to protect producers’ income in relation to unforeseen exogenous crises, including economic, environmental and epidemiological etc.

It is precisely these possibilities that we intend to expand and integrate into our strategic plan in order to further strengthen our producers’ support toolbox under the new CAP.

How does Greece intend to use the new flexibilities recently granted by the Commission, including derogations from environmental measures?

There is a strong concern at the European level about the ‘green orientation’ of agriculture under conditions of questioning of the EU’s food security and sufficiency due to the war in Ukraine, a criticism which I must admit was already present and had been expressed by producers at the public consultation stage of the strategic plans.

This demonstrates the need to ensure the balanced pursuit of the objectives of the new CAP in relation to its economic, environmental and social ambitions.

A holistic development approach is therefore required, in which agriculture and the environment will work in a complementary way to achieve sustainable production conditions and ensure food sufficiency and security, making use of all the financial instruments and tools, both EU and national, which we have already activated to support our producers in this difficult situation.

One issue that has been of particular concern to the agri-food sector is food security. As far as Greece is concerned, do we have food security?

There is no food security issue in Greece. We took all the necessary measures in time to deal with the risk. We helped to overcome bureaucratic obstacles so that we could cover imports from Russia and Ukraine through alternative markets. By recording stocks every five days we prevent any speculation on the market.

At the same time, we are encouraging an increase in the production of soft wheat and corn by including these products in the coupled aid scheme, as well as cultivation on holdings declared for fallow or greening, without losing the privileges provided for by these programmes.

Likewise, sunflower oil producers have assured me that they will increase their cultivation so that there will be no problem in this direction either, although stocks are sufficient even if we don’t import a single litre for five months.

And how do you see the wider picture?

We have covered the imports of corn and soft wheat from countries such as Bulgaria, Hungary, Romania and France, as far as the EU is concerned, and from Canada as far as non-EU countries are concerned.

There is no problem of sufficiency and there will not be a problem. The battle is being fought at the price level so that prices can be contained and start to fall. I believe that because of sufficiency the market self-regulation mechanisms are starting to work and we will soon see positive results.