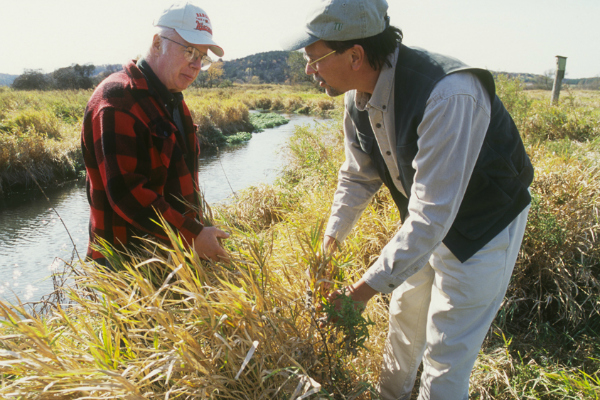 SPECIAL REPORT / Some EU national governments and lawmakers are pushing to weaken proposals intended to create natural defences against pesticides and fertilisers in crop fields. But they should reconsider their opposition to buffer strips and other natural areas, green advocates say.

The future of the CAP remains uncertain in part because the budget for 2014-2020 is still undecided.

EU leaders gathering this week in Brussels are to discuss financing for what has traditionally been Europe’s largest single programme amid growing calls for putting the CAP on a diet. Meanwhile, the agricultural ministerial council is scheduled to consider CAP reform on 17-18 December.

It is almost certain that the CAP’s ‘greening’ proposals will be weakened, with leading MEPs and national agricultural ministers holding out for greater flexibility.

With the economic crisis biting, there is more focus on boosting farm production to create jobs, and to address concerns about tighter food supplies and higher prices driven by recent droughts in southern Europe, the American breadbasket and Sub-Saharan Africa.

But experts warn that weakening natural protections on the grounds that they take land out of cultivation are counter-productive.

EU farm Commissioner Dacian Ciolo?’s proposed reforms of the CAP, issued a year ago, included linking 30% of farm support payments to a requirement that farmers maintain "ecological focus area" of at least 7% of farmland through buffer strips, hedges, fallow land and forested area.

Buffer and natural areas proposed in the Ciolo? plan – though criticised as too timid by environmental groups – could actually nurture long-term productivity while reducing environmental side-effects of intensive farming, according to some experts.

One expert encourages policies to create buffers rich in diversity that provide havens for bees, other important pollinators and insect-eating wildlife. Such buffers both reduce the need for pesticides and fertilizers and limit their impact on surface water.

“In the USA alone, it’s estimated that natural pest control is worth something like $4.5 billion [€3.5 billion] a year. You’ve got a world estimation of the contribution of pollination is about €153 billion a year, so these things have considerable high economic value,” said Ben Woodcock of the British National Environment Research Council.

The buffers prevent crop nutrients from leaching into waterways and provide a break – in effect a natural curtain – to reduce the amount of herbicides carried by the wind to surface water. Woodcock, of the council’s Centre’s for Ecology and Hydrology, testified at a European Parliament panel last month that such buffers areas are good for productivity.

“Field margins are highly compatible with high-intensity agriculture, so farmers tend to be very amendable to them,” said Woodcock.

Woodcock sees the 7% focus area in the draft CAP as a potential important policy for fostering biodiversity. “Modest raises in biodiversity over very large areas would have undeniable benefit,” he said in an interview.

Opposition to greening measures such as making direct farm payments conditional on greening is not universal amongst EU member states. Hans Brand of the Dutch agricultural ministry recently told a Parliamentary panel that linking CAP payments to farmers and ecological measures could achieve “real greening” with benefits for the climate, biodiversity, as well as soil and water quality.

Europe’s crop nutrition industry is also convinced that productivity can grow without ploughing up more land. “It is absolutely crucial from an environmental point of view to use the land under production,” said Joachim Lammel, head of product and application research and development for the Norwegian-based Yara fertiliser company, told the panel on 17 October.

Yet the European Commission proposals on land use have touched a nerve with agricultural trade groups and leading members of Parliament who see some ‘greening’ measures as incompatible with growth.

National ministers, testifying before Parliament last year, have been attacked the Ciolo?’ draft greening measures as too cumbersome and could potentially force farmers to take land out of production despite anticipated surge in global food demand. (See background)

Copa-Cogeca, the agricultural trade organisation, has staunchly opposed linking 30% of payments to farmers to creating the ecological focus areas.

“Farmers not undertaking green growth measures should not receive the full direct payment but the penalty for mandatory greening proposed by the Commission of not only a 30% cut, but also a cut in the basic payment, is unacceptable,” the organisation says.

In a setback for environmentalists, the Parliament and council of agricultural ministers sought to weaken some of the “greening measures” outlined by Ciolo? in proposals released on 12 October 2011.

Farm ministers meeting on 16 July expressed doubts about proposals to reserve 30% of direct payments to farmers as an incentive to practice more sustainable farming. Meanwhile, a report presented the same day to the Parliament’s agricultural committee raised concerns that the Commission’s proposals were too complex.

“Most farmers tend to be not on the breadline but they are under considerable financial pressure. A lot of them have an active desire to enhance and maintain wildlife but from a financial perspective, they need a push to actually do it,” he told euractiv.com. “So you need this top-down driver to provide the kind of subsidies to allow them to implement this.”

“There are positions in the European Parliament that in case the CAP budget is reduced substantially, that greening could be totally eliminated. I mean after all we cannot ask for the farmers to do more for less,” Sofoclis Aletraris, the Cypriot minister of Agriculture, Natural Resources and the Environment, told EURACTIV in September.

“It would be a wonderful world if didn’t have pesticides and fertilizers, and it would certainly be a lot more diverse world, but at a fundamental level – like pest species – it’s something like 18% agricultural production is thoroughly destroyed by insect pest species. If you don’t use pesticides to control them, that would dramatically increase, so you do need chemical control methods,” said Ben Woodcock of the National Environment Research Council’s Centre for Ecology and Hydrology in Britain.

“This new research showing that bees are harmed by a cocktail of chemicals mustn’t be dismissed – it should sting the government into taking decisive action to protect British bees and other important pollinators.”

The organisation representing Europe farmers and farm cooperatives – Copa-Cogeca - says the Commission’s greening proposals would introduce new layers of reporting while threatening farm income by requiring, for example, that 30% of direct payments to linked to greening performance.