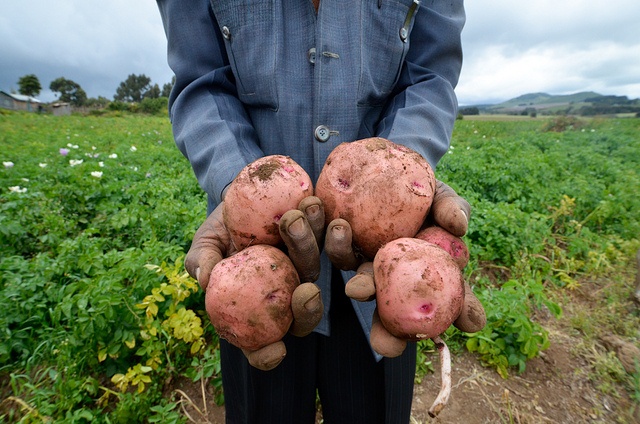 "The potato must go to Africa," said Hans-Jürgen Beerfeltz, state secretary at the German Federal Ministry for Economic Cooperation and Development (BMZ), a few months ago.

Beerfeltz kept a straight face as he marked the launch of the Potato Initiative Africa (PIA), which is supported by the BMZ.

Under the leadership of German potato producer Europlant, a number of companies – including multinational corporations like Bayer, Syngenta and AGCO International – intend to make the potato competitive in Sub-Saharan Africa, starting with Kenya and Nigeria.

The BMZ itself is a sponsor, helping fund the currently project with a €1.1 million grant under the German Food Partnership (GFP), which involves both private and public actors. The goal of the project, which was initiated by the companies themselves, is to raise food security in developing and newly industrialised countries.

"The potato has enormous potential to provide people with adequate food," said Justus Böhm of Europlant, underlining that the crop is above average in its productivity, conserves water during cultivation and contains starch, protein, fat, vitamins and minerals.

The potato is not just meant to satisfy hunger, it is also intended to support local farmers and businesses. Current yields among potato farmers in Sub-Saharan Africa range from 3 to 15 tonnes per hectare, far below the rate expected under the potato initiative, Böhm explained.

With help from German machinery and training, farmers are expected to modernise production and increase yields. In addition, Europlant intends to improve business relations by connecting various actors in the agri-food value chain.

"If we take farmers by the hand and increase their yields, we can raise security for all business partners in the supply chain," Böhm said.

Böhm’s interests are in no way hidden. Europlant is expected to benefit as the potato varieties used in the project will exclusively come from the German company. Smallholders will receive the money to buy German machines and pesticides from microcredits provided by local commercial banks.

Potato initiative should be ‘side-tracked’

"This initiative has nothing to do with serious development cooperation and should be left on the side track of history," said Jan Urhahn, an agriculture expert at the development policy network INKOTA (Information, Koordination, Tagungen).

Marita Wiggerthale, a nutrition expert at Oxfam, warns that European potato varieties could only successfully be grown in Africa with massive fertilisation, saying this would have disastrous effects on groundwater supply and entail financial risks for smallholders.

Instead, she told euractiv.de that locally adapted tubers should be more strongly promoted as these would be easier to integrate into the existing cultivation systems and grow better in the end.

The Potato Initiative Africa (PIA) is not the BMZ's only public-private partnership promoting the cultivation of German potatoes in the developing world.

In Africa, the Deutsche Gesellschaft für Internationale Zusammenarbeit (GIZ), a federal government agency, has partnered with the fertiliser producer K+S Kali and the International Potato Center (CIP), to implement several projects on food security and sustainable development in rural areas.

Two years ago they signed a letter of intent, which resulted in a research project on "Improved soil fertility management for sustainable intensification of potato-based operating systems in Ethiopia and Kenya". The project is expected to be launched this year, with financing help from GIZ, which committed more than €1.2 million.

The project, which still needs to be formally approved, focuses on issues such as soil fertility, plant nutrition, water management, food security, and operating systems based on potatoes, said Michael Bernhard, from the research division of GIZ.

Germany is not alone in promoting potato cultivation in Africa. Ireland also wants to support African tuber production with a "potato coalition" including actors from the economy, research and civil society.

However, instead of introducing European potatoes on African markets, Dublin intends to support smallholders in producing their own seed in the long-term.

Within the framework of the Potato Centre of Excellence, the CIP and numerous European universities are studying resistant and fertile seed varieties. As it turns out, importing potato seed from Europe would be too costly in the long run, said John Weakliam, the CEO of the development aid organisation Vita international, which is an integral part of the initiative.

The Potato Centre of Excellence has existed since 2012 and intends to help one million farmers in Sub-Saharan Africa. Up till now, donors have come mostly from the public sector, such as the Irish government and the European Commission. But Weakliam says extra funding from the private sector will be necessary if the organisation is to meet its target to raise €50 million. To convince them, he promises profitable prospects for businesses tempted to participate.

In Ethiopia, a focus country, the potato coalition has done well according to Vita. "We have tripled the yields of 6,000 farmers so far and intend to proceed with our commitments in other regions," said Weakliam. Not only can farmers now live from potato cultivation, they can sell 40% of their harvest and use 20% for the next season, he assures.

Vita values the fact that the Irish initiative is only one part of an integrated and multifaceted development assistance project. While the potato is a staple food in many regions, it should only be one crop among many.

The keyword here is "crop diversity". The survival of smallholders should not be determined by one plant, Weakliam said. "With an assortment of crops, smallholders are prepared to face seasonal crop failures and the effects of climate change."

However, the Millennium Development Goal target to halve the number of people suffering from hunger by 2015 is unlikely to be met. Although significant

progress has been made, especially in Asia, poverty and malnutrition have increased in parts of Sub-Sahara Africa.